Based on the real life Dyatlov Incident, Kholat is an atmospheric tour-de-force, producing jump scares, an unrelenting feeling of dread and a large world to explore and discover. The sometimes shaky dialogue and ambiguous narrative, not to mention the irritation of instant death, reduce its effectiveness but Kholat retains enough atmosphere to make this a worthwhile journey.

Kholat's blend of horror and exploration might leave you cold in places but it's a tense atmospheric journey well worth experiencing.

So, brief history lesson: On the night of February 2nd, 1959, nine Russian hikers died from an ‘unknown compelling force’ in the Ural mountains. When a search party found them the hikers were dead, all in mysterious circumstances like the best horror film. Tongues cut out, fractured skulls from non-existent murderers. Only this horror film set-up was real and Kholat, though never able to provide answers, takes you down the supernatural path.

The 70 years since this happened hits a sweet spot. It’s not too close risking offense but neither so long ago that the factual evidence can be dismissed. This being an exploration game the UI is boiled down to basics with a map, compass and a set of coordinates the only real items available. As you’re tracking the hikers the game marks locations on your map and discovering clues in the form of logbooks sets a checkpoint if you come to a bad end. 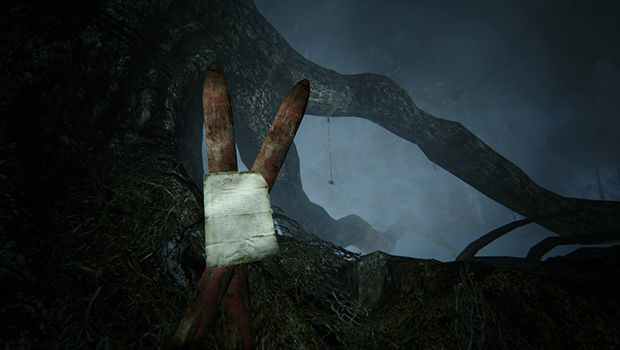 Scraps of journals or logbooks fill in the narrative

Yes, this isn’t a non-death walking game as a creepy anomaly is out there in the woods, tracking you and hunting you down. The campfires provide safety but the best part of Kholat is the dread produced by these monsters. It doesn’t appear in the same place each time and leads to you constantly checking and re-checking every angle as you make your way through the forest. It’s not unlike Alien Isolation in that regard and the uncertainty it produces is Kholat’s best feature.

That the roots of Kholat extend into the real world also adds a layer of tension you don’t get in other supernatural experiences. This experience stayed with me after I played it and you can’t deny the value of having something affect you like that. Alien Isolation takes place on a space station, pfft. Outcast a mental asylum, whatever. Kholat? Nine Russian hikers genuinely died in horrific circumstances that nobody can explain to this day, and you’re going to investigate that in this game. It’s pretty cool stuff!

It’s easy to be cynical about many of these walking exploration experiences that focus heavily on narrative that you discover. You can’t deny though that Kholat is extremely effective in producing an atmosphere that’s memorable and special. Having said all that it still has issues that detract from the experience.

The lack of guided exploration means you can wander around not getting anywhere for a long time. That could be seen as part of the experience but video games need to keep you engaged and not frustrated in order to build atmosphere. I didn’t run into many problems with backtracking but the map is quite large so that getting lost is inevitable and an annoyance that impinges on the tension other sections do so well to create. 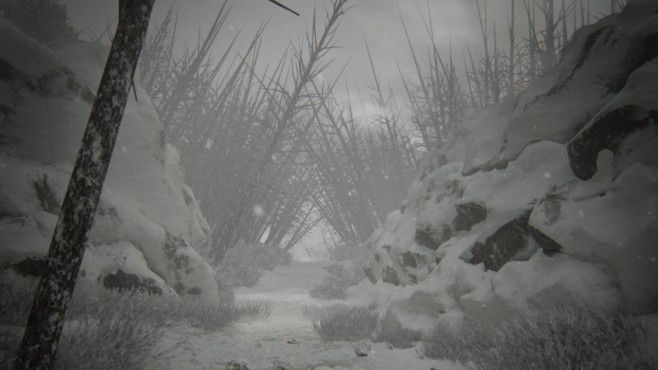 Of course there's a creepy wooded path. Of course

The main narration, though voiced by Sean Bean, is fuelled by slightly vague copy and you always get an odd feeling hearing his northern tones over something so esoteric and, well, Russian. His identity is also mysterious and helps to keep the creepiness and uncertainty going, though I did wonder if many of the passages he comes out with actually made any sense and were put in just as fluff. The logbook scraps you pick up, marked audibly by rustling paper, fill in the narrative of the hikers and the investigation team and are much better. There’s little definitive here but piecing together the accounts is satisfying and most are voiced superbly, though it would have been good to be able to close the journal and hear them as you carried on exploring.

The orange anomaly also acts as a marker of sorts, guiding you towards areas where more clues might hide. Other times it’s a ruse and you’ll be led into dark places where scares and instant death awaits. Other markers are red lights, suitably ethereal and chilling that mark important spots and almost inevitably, enemies.

When faced with these violent ghosts you have no defence, little running speed and no stealth mechanics, which makes each encounter terminal and sometimes difficult to avoid. As these enemies move about on their own it’s usually a matter of time and patience to get through a section. There’s environmental hazards too and most are well-hidden and the sudden death is sometimes at odds with the exploration and the unravelling of a mystery. It also adds tension it’s true, but mostly of the video game frustration tension, not the atmospheric kind. 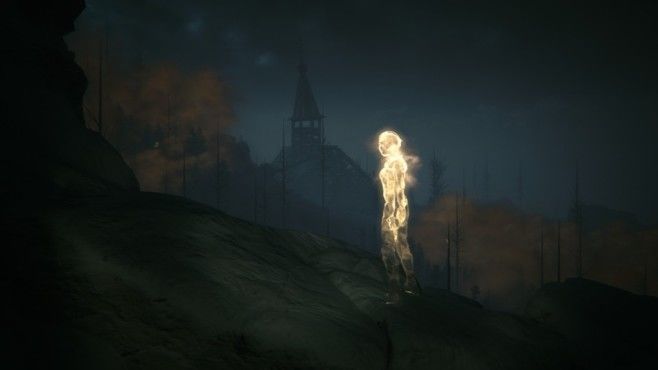 The orange figures guide you towards clues and usually trouble

This is a short adventure, stretching out to maybe 5-6 hours if you want to collect all the logbook scraps and see everything. However, the heightened tension of Kholat means these are an intense and memorable few hours.

Despite its issues I still feel Kholat is a genuinely disturbing experience, full of atmosphere, tension and visually impressive for an Unreal Engine 4 game. Its faults take it out of the really awesome category but I personally loved it and how it blended horror with unravelling parts of a real world mystery. As it is I believe Kholat is still worth playing but just be aware that frustration and tension will be present in equal measure.

Finding the bunker and then falling off my chair in fright. 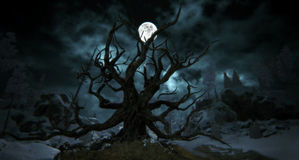