LA Cops’s premise is irresistible: a top-down isometric shooter that takes its cues from Hotline Miami’s hyper-stylised visuals in a pastiche of classic 1970s police dramas – we’re talking handlebar moustaches, aviation shades and riff-laden funk. The blueprint is seductive alright, which makes it all the more disappointing when the final product fails to kindle that same intrigue.

Although LA Cops’s touchstones extend beyond obvious comparisons with Hotline Miami – to the likes of Bullfrog Production’s cyberpunk strategy title Syndicate – it’s hard to look past Dennaton Games’ neo-noir ultraviolence as a benchmark by which to measure the former’s success, particularly when Hotline Miami’s much-vaunted sequel launches on PC just three days before LA Cops on 10 March. 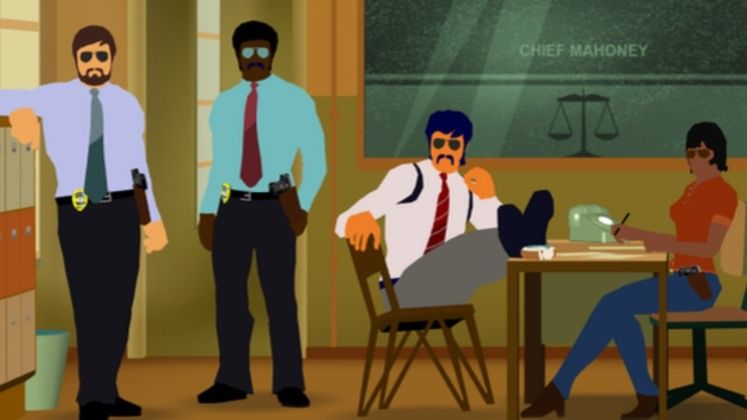 So how have developers Modern Dream differentiated their labour of love from its competitor? Well, for starters, no homage to the buddy cop TV and film genre of the 70s would be complete if there wasn’t a Hutch to your Starsky, which is why you’ll be commanding two officers during your crime-busting exploits.

Before the start of each mission, you recruit a pair of detectives from a selection of six. There are four metrics that determine efficacy in the field (Speed, Health, Damage, Clip Size) and these can be upgraded by spending skill points earned through completing levels. Clearly, Damage and Health are crucial to improve survivability, yet the merits of Speed – namely to make sure that you’re agile enough to avert danger – shouldn’t be overlooked.

The partner system is designed to change the engagement dynamic, encouraging coordinated strikes and flanking manoeuvres. You can switch between officers with a simple key press or order them to a certain location on the map using the middle mouse button. When stationed at a certain point, they’ll react to enemy hostility within their cone of vision, meaning you’ll have to position your partner strategically before initiating a firefight.

In reality, the bare-bones controls and clunky AI render this facet of the game a frustration rather than an asset. With frustrating regularity, your sidekick will remain statuesque, refusing to return fire while shotgun shells and Uzi spray pepper their body. All hell might be breaking loose in their peripheral vision, but they won’t react unless a baddy saunters directly into their line of sight. It quickly becomes apparent that your partner is best employed as a decoy or failsafe should your main character meet his demise – which is hardly the intended purpose. 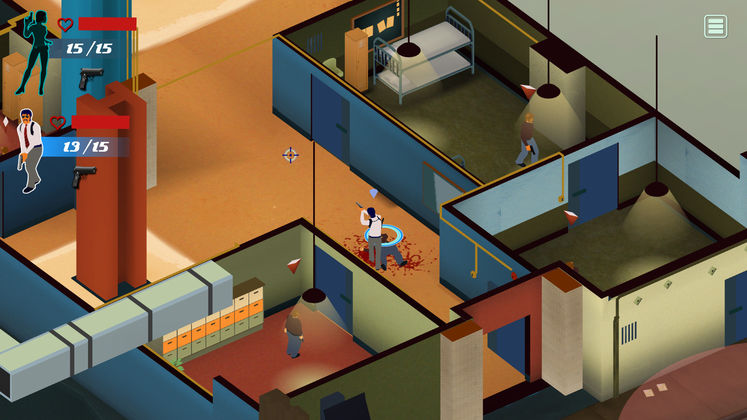 Combat itself plays out as expected, requiring you to kite super-aggressive enemies away from the mob so as not to get overwhelmed. There are five weapons in your arsenal, all of which can be picked up from downed assailants or included in your loadout if you have the requisite experience. Some further balancing wouldn’t go amiss here, considering the Uzi can sear through four or five onrushing enemies with little trouble, while the shotgun sometimes takes four or five rounds to halt a single target. Furthermore, considering the grenade launcher’s tiny ammo capacity, it shouldn’t take more than one grenade to dispatch a foe – which it invariably does. If you wish to get up close and personal, there’s a melee attack that slaps handcuffs on criminals, incapacitating them for the rest of the round.

Unlike Hotline Miami, the environment is partially destructible, with doors splintering from heavy gun fire and conveniently placed industrial barrels exploding on impact. It’s a nice addition that enables you to spring surprise attacks through glass facades, but it’s far from a dominant feature. The perspective can be changed, too, allowing you to snuff out criminals skulking in the shadows out of sight – although their patrol patterns mean you’ll rarely need to use this tactic.

Ultimately much of the joy from games of this ilk derives from weaving a perfect route through the maze of adversaries. Through trial and error you’ll funnel down divergent paths, targeting pockets of weakness in the ranks. If you treat LA Cops as a solo assignment it’s a fun diversion in short bursts, but treat it as a team-based tactical shooter and you’ll encounter numerous road bumps. 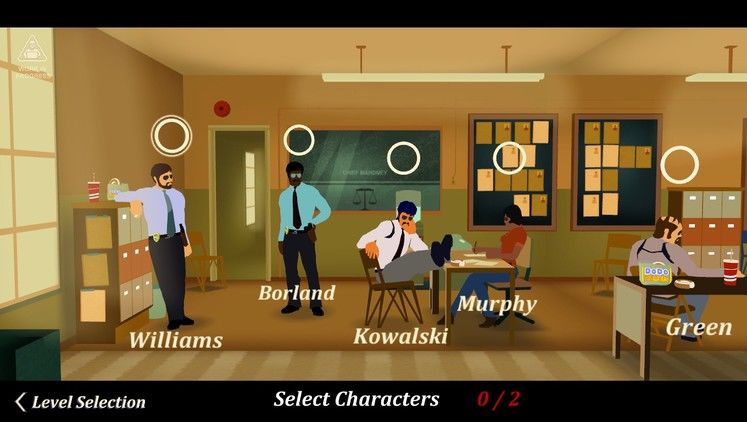 Experience points are in short supply, so you’ll want to concentrate on levelling just two officers

For all the gameplay quirks of LA Cops that strive to forge a unique identity, its biggest strengths lie in its presentation. The aesthetic – while rudimentary – captures the gaudiness of the era perfectly and is complemented by a funk rock soundtrack that is every bit as evocative as Hotline Miami’s warped electro. Nonetheless, the vignettes that preface each mission feel tacked on and would’ve benefited from a little fleshing out, enriching the characterisation of its cast.

All things considered, LA Cops is a decent addition to the sub-genre but one that falls short of its initial promise. With more sophisticated AI and a comprehensive partner system in place, this could’ve been a worthy stablemate for its East Coast cousin. As it stands, it’s hard to recommend LA Cops when you can pick up the next slice of Hotline Miami’s gory abstraction at a similar price point.

Tearing through a wave of enemies with quick reflexes. 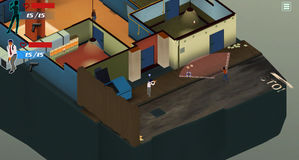