Canker reviewed a rather old tactical multiplayer game from 2002. Got a good score

Anyone who remembers the original Laser Squad will feel right at home here as, from what I can remember, not a lot has changed within the actual game mechanics. What is different, and brings a whole new lifespan to the game, is the fact that this is a Play By Email (PBEM) game. There is no single player game apart from the initial tutorial, you just have to jump right in & choose an opponent. 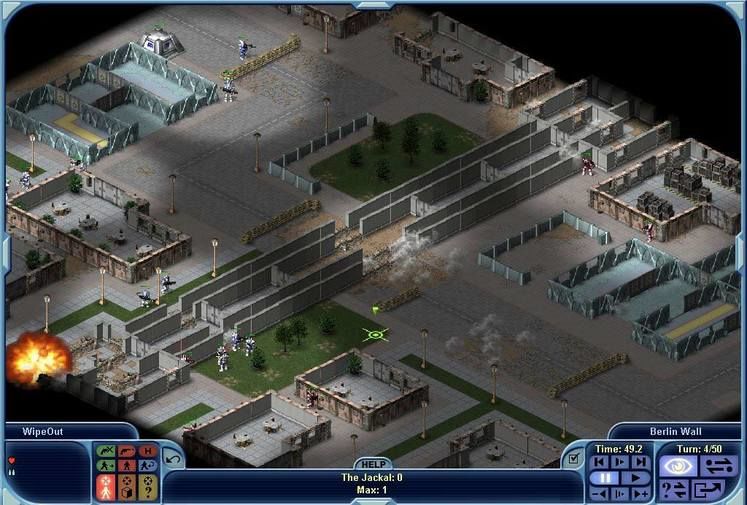 Nemesis utilizes “we-go” gameplay, which should be familiar to tactical wargamers. In a nutshell, you make your move and, when your opponent has made his, the server works out the results & E’s them back, allowing you to watch the results of your turn in a 10 second, real-time slice. It does take some time to get used to this, as most strategy gamers nowadays are brought up on a diet of instant action and frantic mouse movements, but once you finally realise you have no real time limits, you will develop an evil smile & give reign to a full thought process involving that perfect ‘cunning plan’. The movement controls are initially simple – select a unit & click where you want it to go – you will see a path taken & the time it takes to do it (10 second time-slice remember). The subtleties come in deciding what reaction should be made to any event that is likely to occur – run away, hold & observe or just shoot like mad, and adding them to the command line for each unit soon becomes second nature.

Games start out on a mutually agreed map and the 1st decision will be what forces to utilize with the points available to you. You can initially choose between 3 races - the ubiquitous Marines, the formidable Machina or the fast & furious Spawn – each one giving its own ‘feeling’ to the gameplay. Once sorted, you will place your troops within the deployment zone, make a quick prayer to the great God of Gameplay, and E it off. Following the initial deployment, the decisions start getting tricky – just how many should you leave as defence? Who would be best for assault? Will I need a reserve? etc. etc. etc. As a general rule – all will go perfectly to plan until 1st contact – then its very pear shaped until you can start regaining control of the situation. The real joy comes in trying to outguess your opponent as this is no AI that will follow a given set of rules – it may well be worth lobbing a grenade down that corridor ‘just in case’ but don’t be surprised to see one coming back at you from a totally different direction. All out, gung-ho rushes are not even worth the effort – you very often do not have enough troops to overwhelm anyway & it is surprising how quickly your great force can run out of ammo or just get cut to ribbons by a few well sited defenders. 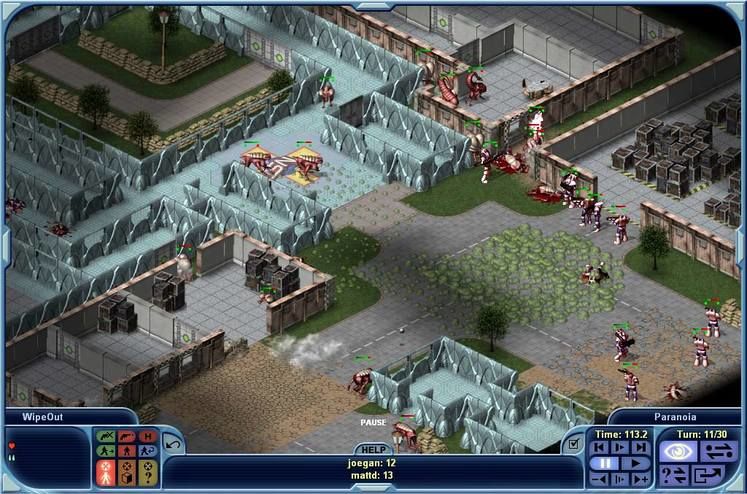 The controls, whilst at first daunting, are very quickly picked up. What is important is to get yourself into a 10 second frame of mind. Click a unit, and click where you want it to go – examine the route it will take. Set the mode of the unit to react in the way you want it to dependant on results. A good safe bet is to retrace steps on contact – you will then know where the enemy is but hopefully not be spotted. On the next move you can deploy in more force if required to try to kill the target that probably isn’t there anymore (oh how you’ll smile, then cry as it pops up elsewhere & decimates your confused troops). Once you have made all your moves, you can press the test orders button to see exactly what will happen. It is normally this stage that you will notice that your carefully thrown grenade has hit an obstacle & is rapidly heading back your way – time for a rethink. Setting units to follow one another is a good way of getting round choke points as they won’t all bunch up ready for a well placed ambush, They’ll go through one at a time giving your opponent the nasty choice of just when best to spring the trap. The game operates on a true line of sight principle so you cannot see round corners etc. Stationing troops on the same wall as the entry door can be a good move as anything entering will generally be looking straight ahead (unless your opponent is a veteran) Make use of whatever cover is available – remember, whilst it is easy to see out of a window, its not always as easy to see in (& a grenade lobbed in for good measure………) You can even replay previous moves to see if you missed anything important (although if you did it’s probably too late now anyway). Always try & make the best use of whatever forces you have: snipers are great for assassinations, but not much cop against armoured units, whilst ensuring a couple of medics are around is mighty handy. The other often forgotten factor is that ammo is not limitless – you will need reloads (if you remembered a supply centre of course).

Being a multiplayer-only game, the quality of your opponents is just as important as the gameplay itself. Here is where Nemesis really stands out, featuring probably the friendliest user community I have ever found. You’ve played the Tutorials, now try a live opponent – It’s as easy as that. The message board is well used and there doesn’t appear to be any of the one-upmanship common to other communities – seasoned veterans are more than happy to play newbies & teach them a few tricks (or even learn some themselves) – everyone seems to realise that all players have something to offer. After a few games you will more than likely start heading for the league tables to get yourself a world ranking and make a name for yourself. 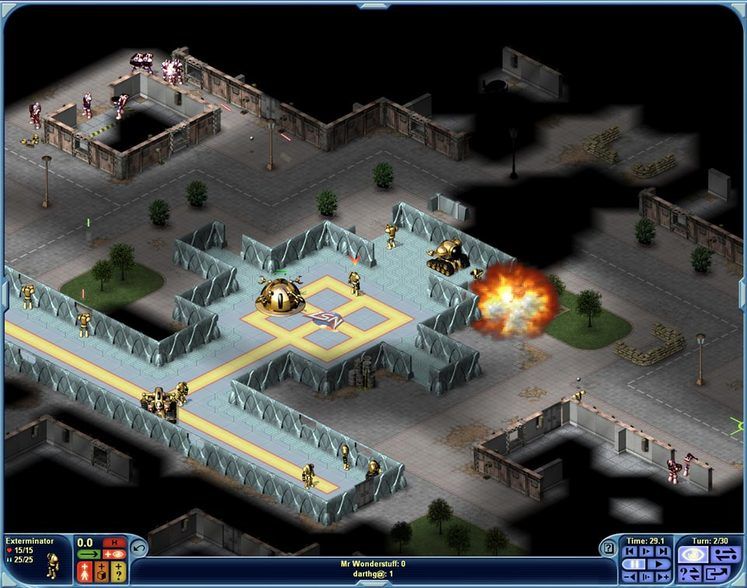 Graphics: 7
The graphics are functional but tend to look very ‘basic’ compared to other strategy games. There is no great detail and I often have trouble trying to identify each unit. Plotting complex movement or firing paths can be difficult due to the scale but otherwise all is cleanly rendered and features plenty of animation.

Sound: 5
Basic at best, being sound effects only. Nothing spectacular, but adequate. 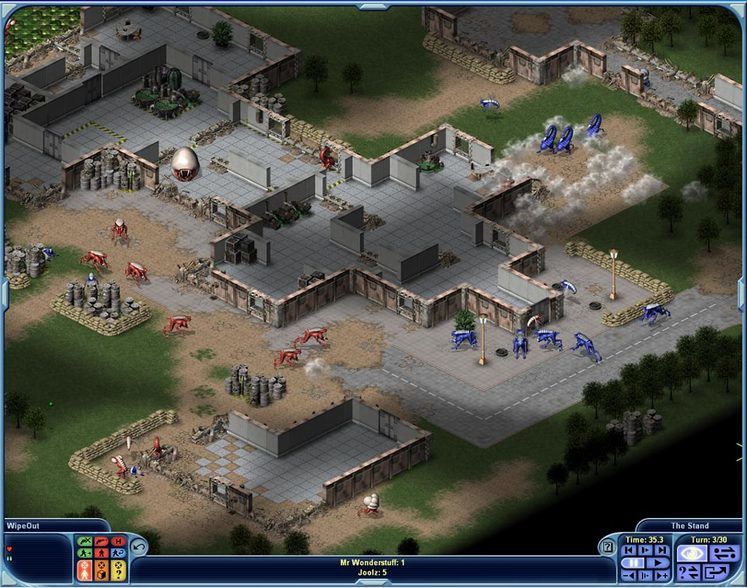 Basic at best, being sound effects only. Nothing spectacular, but adequate. Gameplay: 9 This is the big selling point for Nemesis. There is no pressure to make a move so you can take as much time as you like getting it ‘just right’ (do remember you have a real person at the other end though). The only reason this doesn’t score a perfect 10 is due to the frustration factor that exists due to real life limitations of your opponent meaning that the game will not always go as fast as you want it to. Another strong point here being the fact that you can play with a friend even if they don’t have a copy of the game. 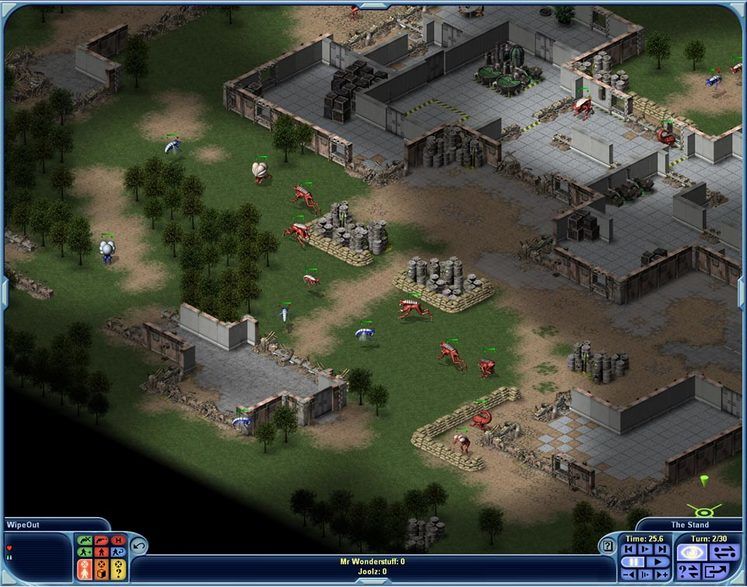 Documentation: 4
I’m a firm believer in being able to read up to check things out & to do that I like to have a book in my hands. I don’t want to have to suspend a game while loading up Acrobat to find out just how to do something. With game prices as high as they are there ought to be a damn good manual with EVERY game.

Summary: 8 In these days of high speed Internet access it is nice to come across a game that can be played just as effectively with something like a 28 bps modem. The community is an absolute must – you may well find yourself playing someone ‘just around the corner’ and can meet up for a good after battle beer session. Some people remembering the original as fondly as I do will be upset about the lack of a single player game (one is promised though) and this should not influence your decision to buy the game – it is worth it. 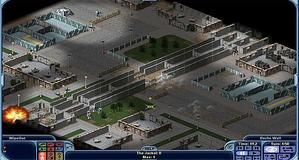