A Dark Fairy Tale That Lives Up to its Name 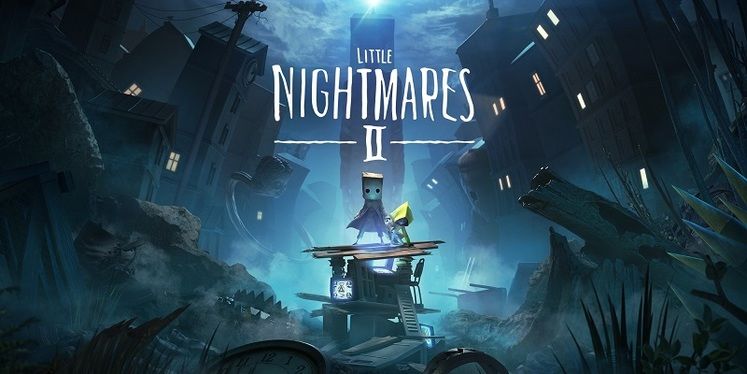 While we’ve come to associate the genre with deadly monsters and haunted houses, horror is more than a collection of spooky iconography. At its core, it’s a matter of vulnerability and perspective, and that’s why childlike imagery is so prevalent in scary stories. After all, no one’s more vulnerable than a child, and that might just be the secret behind the popularity of Tarsier Studios’ aptly-named hit, Little Nightmares. Now, four years after the success of the original, Tarsier is back with a long-awaited sequel in Little Nightmares 2, a natural evolution of the first game that promises to improve and expand on an already compelling experience.

If you’re unfamiliar with the first installment, it was a short but sweet interactive parable that combined the horrific thrills of games like Clock Tower with the dreamlike stylings of a Henry Sellick film. Originally, you played as Six, an emaciated little girl attempting to escape the child-eating monsters of a massive sea-vessel known as “The Maw”. Engaging in simple platforming, solving physics puzzles and surviving thrilling chase sequences, Six slowly traversed a series of episodic chapters, eventually sacrificing her own innocence in order to overcome the odds.

“Simple moments like planning a daring rescue or learning to jump in unison in order to solve a puzzle end up strengthening the bond between Six and the player, raising the emotional stakes when things go truly awry.”

Little Nightmares 2 plays a lot like the first game, with an identical control scheme and the same general mechanics, but it’s also a much larger and more ambitious endeavor. Levels still feel like meticulously crafted dioramas, but their interconnected pathways and expanded size make things more interesting as you journey across a dilapidated cityscape. Of course, you’ll still have to confront disturbing monsters and deathtraps, but the developers have given players more options with the new protagonist.

This time around, players step into the shoes of Mono, a young boy who joins forces with Six as the duo attempts to flee from a dreadful fate. Navigating dreary cabins and shady hospitals, players now get the chance to explore the horrific details of this twisted society, all while attempting to protect Six and Mono’s budding friendship from the cruel world around them. 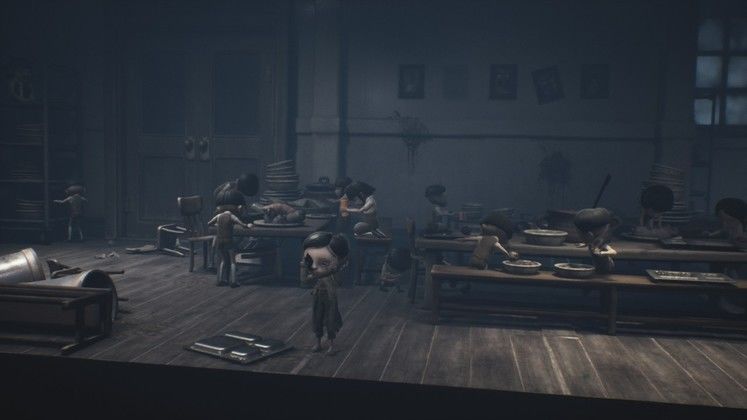 The addition of a companion may seem counter-intuitive, with the lonely melancholy of The Maw being one of the main attractions of the first game, but Six’s charming interactions with the player actually add tension instead of removing it. Simple moments like planning a daring rescue or learning to jump in unison in order to solve a puzzle end up strengthening the bond between Six and the player, raising the emotional stakes when things go truly awry. It helps that her A.I. never gets in the way of Mono’s exploration, with many segments feeling like a co-op experience instead of an extended escort mission.

The game still suffers from some of the same issues as its predecessor, with a few frustrating jumps and chase sequences that inevitably devolve into trial and error, but the developers have mercifully revamped the checkpoint system to make up for this. Despite the excruciating animations and grisly sound effects, you’ll never lose more than a few seconds of progress after death, which is a big deal in a linear title that expects things to play out in a specific way so that the narrative can continue.

Thankfully, the player has been given more agency over their own fate with the inclusion of appropriately crude combat mechanics. From oversized axes to broken pipes, Mono can wield an assortment of cumbersome items in order to protect himself and his new friend. The fighting itself is intentionally sluggish, with the 2.5D perspective making aiming a chore, but the revamped checkpoint system keeps things from becoming truly frustrating. Plus, the difficulty of landing attacks coupled with the infrequent nature of these encounters also guarantees that the action doesn’t get in the way of the scares, as you still feel vulnerable even when smashing disembodied hands. 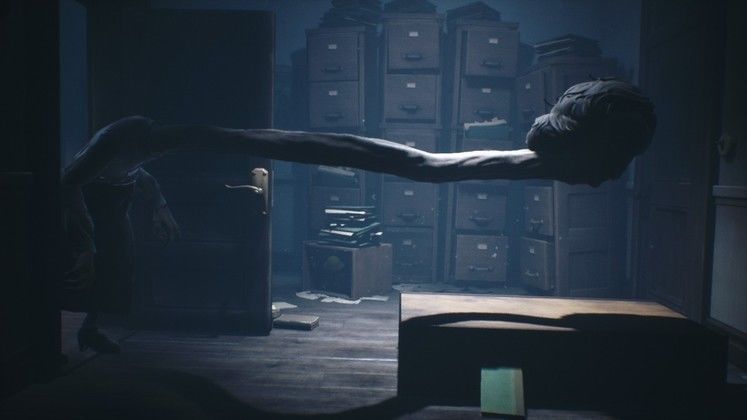 Beyond the combat, there are also more interactive objects scattered throughout the levels, beginning with an assortment of collectable hats that Mono can equip via the pause menu. Players will also encounter the disembodied ghosts of other lost children (which unlock something special if you find them all), plus tons of abandoned toys and other objects that help to further flesh out this decadent world.

Some of these items can even alter gameplay, with Mono eventually stumbling across a flashlight that replaces the first game’s lighter, not to mention an otherworldly TV remote that allows him to travel through television sets. The experience might still be linear, but these additions help the game to avoid the common platformer pitfall of “head right to make something interesting happen”. Overall, these added details make Little Nightmares II feel more like a proper horror game than a linear tech demo that just so happens to have a gorgeous art style.

“Not only does Little Nightmares 2 live up to its name, it also improves on nearly every aspect of the first game.”

Speaking of art, the music and visuals are even more haunting than before, with Tobias Lilja’s eerie tracks combining with the improved lighting and textures to make Little Nightmares 2 both beautiful and horrific in equal measure. I particularly enjoyed some of the more intimate themes during quiet moments with Mono and Six, plus the inhuman animation work on some of the more gruesome monsters. The more varied locations have also given the developers a chance to show off more of that surreal art style, resulting in a stunning experience with plenty of disturbing eye-candy. 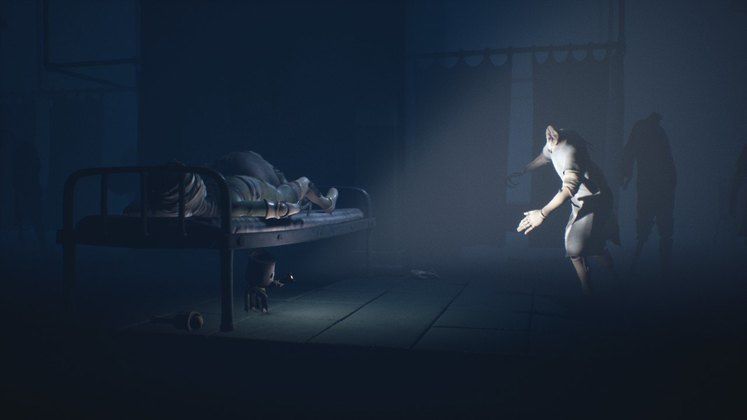 While I think the first game had more iconic monster designs, there’s no denying that the sequel drastically ups the ante in the scare department. The opening level is grueling enough with its bag-headed huntsman mercilessly chasing you through the woods, but things get even more terrifying when you meet gameplay-altering enemies like demonic prankster children and photo-sensitive surgical abominations. I definitely wouldn’t recommend this one to the faint of heart (especially the second half of the game) but at least there’s plenty of downtime in between encounters as you make your way through the city.

I also really appreciate the seamless transitions between these unique environments. From the beginning of Mono’s odyssey to the bitter end, you’ll feel like this has been a single long trek, and not just a collection of independent levels. The game is also much longer than its predecessor, even if you include the Secrets of the Maw DLC. This is both a good and a bad thing, as I love the larger areas and enhanced exploration but feel like the developers could have trimmed some of the less-compelling content and focused on the stuff that worked. 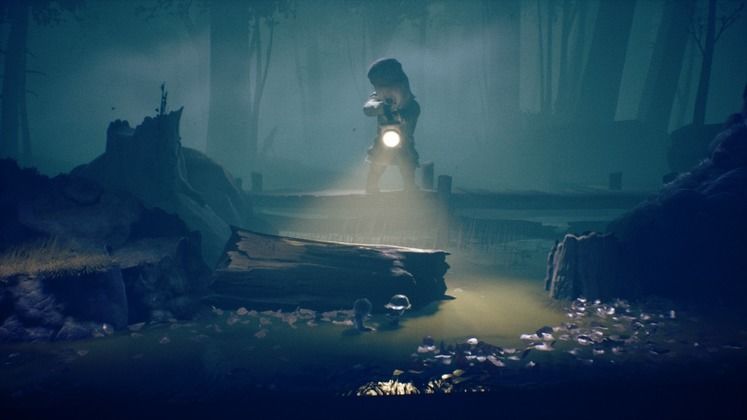 Nevertheless, the surreal narrative and visuals are the main attraction here, with Mono and Six’s relationship forming the true heart of the story. Like the first game, there isn’t any real dialogue, with worldbuilding and exposition delivered through visual storytelling. While I believe players will understand and enjoy more of the sequel if they’ve experienced the previous game’s DLC chapters, Little Nightmares II is still one hell of a standalone fairy tale, even if it’s a bit too obtuse for its own good.

Performance: Ran smoothly on a Desktop equipped with 16gb of RAM, Radeon RX 560 and AMD Ryzen 5 1600 (3.20 GHz), though there were a few brief instances of screen-tearing.

Disclaimer: Little Nightmare 2 was reviewed on the PC and a copy of the game was provided to GameWatcher by the publisher, Bandai Namco, for free.

Not only does Little Nightmares 2 live up to its name, but it also improves on nearly every aspect of the first game. Players may run into a few frustrating hiccups along the way, but exploring this horrific world with Mono and Six is immensely satisfying. At the end of the day, I’d recommend this one to any fan of surreal horror stories with emotional twists, though you might have trouble sleeping when it’s all said and done.

Using the flashlight to stun creatures made of discarded prosthetic body-parts while navigating a pitch-black hospital. Nope. Nope. Nope.