Better late than never, the son of the devil wants to show off his new toys. It is an omen

The witching hour is past. Halloween has come and gone, and Lucius has been out for more than a month before it materialised in a puff of smoke for review. Far from being the case of infernal lateness that it might seem, Lucius terrifies with displays of its hellish power, by turning the clock back to 1998, when all review copies of games arrived by post.

Upon opening this mysterious package, I exalted the dark glory of Satan with the time honoured exclamation of “They still sell games in boxes?!” There’s a certain nostalgia that comes from handling a game’s physical packaging in this godless age of “Steams” and “downloadabytes” that convenience worshipping heathens favour to summon games directly to them, but it’s the veritable moody infant when compared to the age of Lucius’ inspiration.

If it wasn’t already demonically obvious, Lucius hearkens back to '70s horror film classic The Omen, which followed a young antichrist’s journey of self-actualisation through evil perpetrated atop his big wheel trike. That’s a pretty good description of Lucius too, depending on how early you unlock his stair defying big wheel.

When not cycling up staircases with gravity defying ease (the sign of the beast!), Lucius is slaughtering the cohabitants of his maze-like mansion home in a series of ever more elaborate murders guided by the will of poorly lip-synched Satan.

As a loving tribute to its inspiration, it’s all very authentic, right down to the ominous soundtrack that oozes occult and almost convinced me I was listening to Goblin for the briefest of moments, a band who lent their mood altering psychadelia to many an Italian shock horror in the '70s.

Excepting the bitchin’ score, Lucius’ authenticity is a double-edged sword. Remember, this is a game about evil. Not moustache twiddling, top hat wearing, tie the damsel to the train tracks and dance around evil, but impassive, calculating, and bloodthirsty, and it doesn’t shy from that.

When the devil-child contrives to collapse a kindly old man’s skull with a frozen stalactite, the bloody destruction of his cranium is shown in intimate, unflinching detail. It’s not going to keep anybody up at night, but there is an unsettling note to planning and enacting opportunistic murders with Satan Junior, and rightly so.

If anything, Lucius is actually a good example of how videogames don’t desensitise its audience to violence; because when faced with what is roundly a supernatural sociopathy simulator, the vague realism and queasy detail of orchestrating the totally unprovoked killing of those unlucky enough to be near is a gruesome indictment of the monster responsible. It’s not the kind of horror built on adrenaline and fear, but on unpleasantness and incomprehensibility. “Why?” Many characters ask in their own way, even if it’s a surprised tortured scream, and the answer is never anything but a silent because.

Everything happens inside the grounds of the family mansion, which at first gives the impression of an open world environment to explore, and the confusing labyrinth is easy to get lost in, even with the multilayered map, but with a few notches on the chopping block, this quickly gives way to the impression of hapless victims trapped inside a cursed place with a monster they don’t know is a six year old.

The way Lucius feels is unique, for better or worse, this kind of horror, seen from the perspective of the monster stands on its own. The way Lucius plays, however, can either reinforce this, or get in the way of it. Each murder requires some catalyst; rat poison, a meat saw, a wobbly piano, and the chapters are the acquisition and creation of opportunity to use these items.

Wandering the halls of the mansion, the need to find puzzle completing items draws Lucius closest to an adventure game, and it can suffer from how hard it can be to identify these items and the correct place to use them; not the puzzle itself, but finding the exact spot to place the item, which only becomes obviously highlighted when that correct spot has been reached. Both examples are frustrating and the 3D version of hunting for the perfect pixel to click to solve a puzzle you know the solution for.

There isn’t much prompting, and at best clues can be deduced from dialogue or observation, though cryptic hints can be provided if enough chores have been completed to get the hint giving item. While chores give a reason to explore and become familiar with the mansion, that minor element of the game is short lived and the mansion itself doesn’t seem to have any secrets to uncover that aren’t essential to the story’s progression.

Luckily it’s rarely as simple as using found items to off friends and family, and Lucius’ demonic powers come into play to liven (or deaden) things up. As his powers increase with the death toll, success becomes more and more dependent on creative use of these powers, whether it’s whisking something off a shelf through the power of thought, or filling another’s head with thoughts of suicide, or the increasingly useful ability to wipe the minds of anyone who catches you in the act; an all but essential ability as Lucius’ pronounced and repeated focus on stealth sees it teetering on the brink of becoming Mephistopheles Gear Solid.

Obviously, it’s important the antichrist doesn’t get discovered, and the various situations the stealth element presents forms their own type of environmental puzzles, be it finding the right place to hide, or figuring out the best use of infernal power and these blend together well enough.

It’s just… there’s a lot of running around in search of things, par for the course for any adventure game really, and for the most part, the satanic powers are serviceable but underwhelming, complete with pitchfork level stiffness of handling.

Lucius is at its strongest when the surprisingly engaging murder mystery story - told from the progression of the investigating officer - throws up ever more elaborate, progressively grimier scenarios for the littlest dark lord to conquer. In one example, Lucius discovers that a member of the family is engaged in multiple, simultaneous affairs with the help. So, he must collect evidence of the physical act and deliver it to the other lover, all without being detected, so he can later swoop in and take over the mind of the wronged woman at her most vulnerable, coaxing her into what looks like suicide.

It’s dark, it’s dirty and it oozes malice. There’s a lot of love that’s gone into Lucius, and it’s visible in the mounds of detail that covers the various parts of the mansion, or the macabre logic of the puzzles, and spurred on by the urgent string sections or ghostly organ pieces, the atmosphere thrives.

But it is sadly not without sin, foremost among these being the annoying tendency to crash to desktop upon discovery’s game over. The formula has a lot of potential, but there’s this tendency to feel aimless at times, and burdened with more traipsing at others, and it’s not helped by the difficulty curve being all over the place thanks to how particular but unhelpful the interface can be.

There’s a lot of content on offer for the reduced price, and Lucius will certainly appeal to puzzle enthusiasts who want a darker edge to their adventuring, or murder enthusiasts who’d like to give their brain a work out rather than their stabbing arm. The devil’s certainly in the details, just don’t come crying when the mechanical side of evil turns out to be its own kind of tiny hell.

There’s a lot of content on offer for the reduced price, and Lucius will certainly appeal to puzzle enthusiasts who want a darker edge to their adventuring, or murder enthusiasts who’d like to give their brain a work out rather than their stabbing arm. The devil’s certainly in the details, just don’t come crying when the mechanical side of evil turns out to be its own kind of tiny hell.

The run up to convincing the maid to take the plunge stands tall. Also, the soundtrack which comes on its own disc is enjoyable and cinematic. 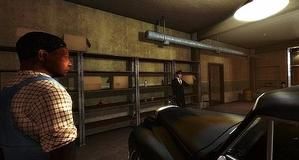