Madden is all we get when it comes to licensed pro football, so I was expecting more

In the last few years Madden has been nothing less than immersive and fun. Since debuting on personal computer in 1989, John Madden Football has gone from niche product to pop culture phenomenon. NFL 06 could very well be remembered as the game that didn't improve enough over its counterpart -- and for the first time in years, became a little less fun to play.


What I don't like to hear in regards to anything I consider being a good product or in this case, an outstanding game, is any of its aspects being "revolutionized". The passing engine of Madden football has been left untouched and has stayed relatively the same for 10 years. Why? Because it's fine the way it is. Why take a sublime series like this one and try something so drastically. The QB Vision and Precision Passing concepts, the biggest change of 2006, are hit or miss in this way. Some players will love it, and some will hate it. But what these two features do is require the offensive user to utilize a cone representing the quarterback's vision, or line of sight, when throwing to a receiver. After the snap, players must then pick out the receiver/back and surround them with the vision cone before releasing the ball or the pass is way off-target. Just as in Madden's little brother NCAA Football 2006, the control schemes have been changed.

The offense has the truck stick now, leveling out the big hit potential for both sides of the ball. Identical to the hit stick, the truck stick is based on timing. As fun to use as the truck stick can be, it's not very functional in the open field so it's best to limit it's use (which is tough) to short yardage plays or goal line situations. Trucking over someone slows down the ball carrier more so than the average broken tackle (making the decision to flick that analog stick an important one).

No noticeable new tackle animations found their way into 2006. One sweet little number I did come across, though, was the receiver's new ability to duck under oncoming tackles from safeties or defensive backs when running routes across the middle. With the new Head-tracking, players will now watch the ball travel around the field, meaning no more blind catches by receivers.


For Madden 2005 we saw significant improvements made on the defensive side of the ball. Hot routes for DB's and linebackers made defensive play significantly more versatile and adaptive, and fortunately, helped prevent the opponent from continually working you over with those money plays that are somehow effective every time. No significant changes were made on D for 2006 so expect the same options available for this year's model. Another big improvement that was made in 2005 was the AI, especially on All-Madden difficulty. For this year, the only noticeable AI improvement is the smart route system, meaning that if you're in a 3rd-and-12 situation, and you have a solid 10-yard pass play to the tight end in your arsenal, when you run it the TE will extend his route those extra 2 yards to pick up the first. These are the types of implementations that have made Madden such a technically excellent game, and always kept it on top of the virtual football offering.

Online play has been improved this year, allowing for the sharing of files between gamers plus more and comparative matchmaking. Also, players can now check their fantasy scores online.

Superstar Mode, despite a few AI quirks, is the brightest and most original addition to single-player mode since the Franchise has begun. What superstar mode entails is experiencing the lifestyle of a NFL player off the field, and acquire personas specific to the way the player lives their life. Whether, fielding endorsements from septic tank companies or auditioning for the hot indy flick of the summer, there are plenty extracurricular activities for the player to get his mischievous self involved in. Be sure to select the right set of parents when you start it up. Your parents, as well as a few other events (like the infamous rookie IQ test) will be the determining factor on your player's stats at the outset of his career. Choose a father who was an All American sprinter in college and you'll be blessed with stellar acceleration and speed.

Madden is all we get when it comes to licensed pro football, so I was expecting more. A franchise that became so enjoyable and successful like this one will incidentally force itself under a microscope to be revered or criticized when any radical change occurs. Despite a few faults, however, Madden NFL 06 is still a fantastic game, just not as much fun to play as it has been the last few years. For those gamers who only buy Madden as their one game a year, maybe this could be your favorite installment yet, but for everyone else, 2006 feels like a stutter step or experimental addition to the franchise that has failed to outdo itself for the first time in recent memory. 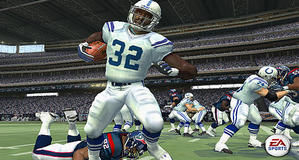