Yet another tower defence game... but wait, it's really good

The tower defense genre is saturated to the extent that it can be difficult for any new entry to carve out its own niche. McDROID manages to do that by stripping back the autonomy and keeping you on your toes throughout each mission, as you attempt to juggle a multitude of tasks (building, repairing, planting, harvesting, upgrading and shooting) to overcome your assailants.

McDROID is the debut release from San Francisco-based developer Elefantopia, yet with the level of polish on display you’d be hard-pushed to intuit that. The game thrusts you into the shoes of its eponymous canine robot, who looks like the illegitimate lovechild of WALL-E and Borderland’s Claptrap. Upon returning home to Planet M with her sidekick, Shuttle (a quadruped spacecraft with a penchant for dry witticisms), the metallic lead finds the land ravaged – corrupted by a virulent swarm of alien species. And so begins your quest to rejuvenate M’s surface and bring vitality back to the planet’s flora.


Missions revolve around protecting Shuttle from an assortment of foreign parasites. Naturally, to fend off the waves you’ll need to build turrets. These can be purchased once you accrue the requisite amount of strawberries (the game’s primary currency) by planting, growing and harvesting the fruit at set locations. This system wherein your finances are dictated by your ability to ferry resources back to Shuttle – and not how many creepy crawlies you’ve killed – lends a frenzied paced to each mission and negates the downtime the genre often suffers from.

The skill lies in knowing what to prioritise and when. Do you bunker down next to your cluster of turrets and repair them as they rebuff waves of bloated worms and insectoids? Or do you leave them to their own devices and continue foraging in the pursuit of superior ordnance? Eventually, you’ll unlock the ability to spawn miniature robots that will collect the berries for you, but even then you’ll want to expedite the process yourself.

At first, turrets can only be erected on fixed mounts, meaning turret selection is all-important. Finding the right balance of lasers, missiles and tesla guns and the order in which to construct them is a puzzle that may require a few retries to decipher, such is McDROID’s unforgiving, but fair, difficulty curve.

Much of your progress in the early missions will be contingent on clever placement of trees on the mounts. Trees operate via a Bloom mechanic, causing the ground around it to erupt in a sea of blossoming flowers, which serve to strengthen turrets and preclude the spread of Corruption (toxic lava that has the reverse effect).


Planting saplings next to strawberry patches enhances their rate of growth and, hence, the rate at which they can be harvested. It’s a cute mechanic augmented by some brilliant animation – in much the same where there’s a certain pleasure to be gained from witnessing a once barren field spring to life in Thatgamecompany’s Flower, the same can be said of McDROID’s Bloom mechanic.

On that note, the animations and sound effects are a delight throughout. From the mechanical whirring of a repair arm, to the satisfying clunk when you mount one on McDROID’s back, it doesn’t feel like Elefantopia are an inchoate studio toying around with their first project – there’s a definite lustre you’d expect from a more experienced outfit.

While your family of turrets constitute most of the damage output, McDROID isn’t completely defenceless herself. Turrets mounted onto her back, coupled with a few armour upgrades, transform her into a scuttling tank, which is perfect for scouting out and targeting enemy spawners that are beyond the range of your fort. Alternatively, if turrets are within McDROID’s proximity, you can focus them on a selected high-risk target.

McDROID’s singleplayer story missions are fleshed out by a series of challenges, which when beaten unlock the yet tougher Nightmare Challenges. Moreover, friends who own the game can drop in (and out) at any moment to assist you with the campaign or fight an increasingly more powerful, infinite wave of monsters in Arena mode.


In its Steam blurb, McDROID is described as a “tough as nails arcade tower defense”, which is not far wrong. Despite earning access to upgrades at a research centre (you purchase these with blue gems dropped during missions), the concluding levels are a stern test of your accumulated knowledge and skill.

In truth, this writer wasn’t overly excited at the prospect of playing McDROID when they first read into it – more fool me. While I still harbour reservations about its long-term appeal (a product of the genre’s repetitive nature more than anything) McDROID is an excellent tower defense romp with enough candied charm to keep you coming back.

In truth, this writer wasn’t overly excited at the prospect of playing McDROID when they first read into it – more fool me. While I still harbour reservations about its long-term appeal (a product of the genre’s repetitive nature more than anything) McDROID is an excellent tower defense romp with enough candied charm to keep you coming back.

Buffing up all your turrets with a well-placed tree and watching the mayhem ensue. 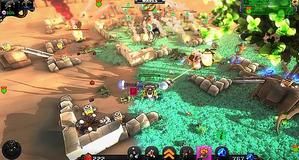