Mother Russia, the Fatherland and the fields of Suffolk call their respective soldiers to arms in our Men of War review

If Company of Heroes has taught us anything, it’s that soldiers can take multiple bullets. You only have to run back to headquarters for reinforcements to magically appear, bolstering your squad. Men of War takes a more realistic approach. If your men get shot in the head, they refuse to get up again. If you use up your force, it’s game over. Men of War makes you care about your soldiers again. They’re no longer faceless grunts. They’re men, thrown into the harsh reality of a mechanised war that took millions of lives. Welcome to the 21st Century’s bloodiest history book.

Men of War is a bit like The World at War television series, but without the superb narration of Laurence Olivier. The developers have attempted to provide gamers with a range of conflict situations. That means you get three campaigns from the perspective of Russia, Britain and unusually, Germany. It’s a rare occurrence that you’re allowed to play as the instigators of WWII, but historical accuracy rears its head. Take the game online, and you also get to bring the US and Japan to the fray.


If you’ve played the criminally ignored, Soldiers: Heroes of World War II then you’ll feel right at home with Men of War. RTS veterans will struggle while they attempt to get to grips with the game’s large scale combat and contradictory focus on micro-management. Men of War seems to attempt to do everything under the sun. Think Commandos meets Band of Brothers. There’s explosions going off while you attempt to inventory manage. It definitely has the prospect of confusing lesser-brained gamers, but stick with it and the game starts to make total sense.

Gameplay follows the RTS blueprint. You control a number of men, vehicles and reinforcements via the expected controls. Point, click, watch your men attack and hopefully survive. Your forces are often limited and if you’re careless with them (sending them headfirst into machine gun fire or attempting to punch a tank to death) you’ll find the corpses building up. Tanks, trucks, cars, motorbikes and artillery are all equally flimsy. Chuck a unit of men into a troop carrier and you’ll find a well aimed tank shell devastating.

Men of War really makes you think. Thanks to a clever cover system, you can strategically place your troops to suppress the enemy or just provide counter-fire. If there’s a house in the way, feel free to drive through it with a tank. A well encamped enemy will mow your advancing soldiers down, so flanking becomes a necessity. The game really makes you think about the strategy part of the genre’s name and thankfully tactical advancement generally works. There are moments when your troops choose a stupid path, but the game makes up for it through its ever-changing scale.


One minute you’ll be leading a three men squad around back, picking off enemy troops and stealthily stealing repairable tanks, and then next you’re in control of several companies trying desperately to withhold a German advance. The game helps you with a mini-map, hotkeys and a clever grouping system that adjusts to your mouse clicks. It can be overwhelming at times, but if you’re concentrating its frantic pace becomes less difficult to manage.

Saying that, the game doesn’t exactly ease you in. The HUD is a tad ‘retro’ and there’s a lot to take in while your men are crumbling under the Reich’s boot. Just when you’ve kitted up a troop, you’ll find him laying dead in a trench ten seconds later. Inventory management is clumsy and could use some work and the game’s difficulty curve is pretty steep.

Niggles aside, for a lesser-known developer, Men of War consists of high production values. The graphics engine is the most ‘in-your-face’ feature. It’s a deliciously detailed game. There are hundreds of litter objects, effects are explosive and textures are crisp. Each mission is introduced by a mini history video, an in-game cut-scene and an objectives outline. Interactivity is huge with every solider lootable, weapon able to be picked up and house enterable. The developers have put a huge amount of effort into their game and it really shows.


Multiplayer connectivity is equally strong. There’s co-op for campaign missions and a variety of competitive multiplayer modes. Nothing stands out as enormously addictive, but there’s a couple hours enjoyment to be had if you can find a couple friends to play with.

We implore you to at least try Men of War. It’s the least you can do. If you don’t you’ll be missing one of the best strategy games in a long while. It has its issues, but we’re adamant that the developers will patch these. Slip on your uniform and get ready to use your ‘commander’s brain.’ Strategy has arrived.

We implore you to at least try Men of War. It’s the least you can do. If you don’t you’ll be missing one of the best strategy games in a long while. It has its issues, but we’re adamant that the developers will patch these. Slip on your uniform and get ready to use your ‘commander’s brain.’ Strategy has arrived.

Woefully shooting down aircraft as it dive-bombs into your own troops. 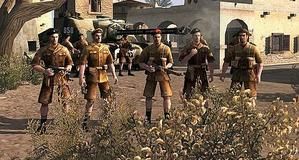