Jane Jensen returns to adventure games, but this isn't a Knight to remember

Okay, I admit it, I've never played the Gabriel Knight series. Despite being fairly knowledgeable on all things adventure my views on that series were always coloured by the infamous cat hair moustache puzzle and I never really gave them a chance. I thought I'd have a chance to redeem myself though as Gabriel Knight creator Jane Jensen is back with Kickstarted (yes, another one) adventure Moebius: Empire Rising, developed by Phoenix Online who made the okay Cognition series. I've now played the game to completion, and it's apparently not me that needs redemption.

Moebius follows Malachi Rector (and already I'm sighing), an antiques dealer and pompous prick who travels around the world and for some reason agrees to get involved in a murder investigation for a secret nonsense agency called FITA (we never find out what it stands for). This leads to a big conspiracy involving the Moebius theory that time repeats and people can reappear throughout history, which Malachi is good at spotting. It is all, frankly, utter bilge and I'm actually struggling to remember anything exciting about it. You're trying to find the future wife of a possible president for basically the entire game because they're similar to another famous couple from history. Why, and why would anyone hire a ninja army (yes) to stop you? I have no idea, and both Jane Jensen and Phoenix Online clearly didn't have any good ones either.


The genesis of the plot clearly started with the intriguing-sounding Moebius theory, which as mentioned suggests that famous historical people could reappear again. The problem is that this was clearly a very difficult idea to turn into a compelling plot, and even ignoring what a stupid theory it is or the idea that secret well-funded organisations would be set up just to find these reincarnated historical people we still have Malachi Rector to deal with. In many ways the whole plot feels like an excuse to make him seem important, as his special skill involves analysing people and combining it with his photographic memory to work out what historical figure they resemble most. This type of person would obviously be of great interest to FITA, except that their whole agency was set up to do exactly that anyway and they've already identified the people in the first place.

The plot never really gets going or explains much satisfactorily and is built on a shaky and boring foundation, and unfortunately the characters aren't much better either. Malachi's most interesting feature is that his mother was eaten by a lion (not joking) but he's also a complete and utter dick. There's one moment where his bodyguard Walker hears him yelling as if in pain, rushes in to help (his job that he's paid to do) and is subsequently screamed at by Malachi to get out. He mellows a little towards the end but remains a decidedly uninteresting and unlikeable character. This could be said of all the cast. David Walker, his bodyguard and possible will they/won't they love interest, is the second main character and doesn't seem to have any personality at all. Everyone else in the plot just seems to be there playing a role rather than feeling like actual people.

Then we get to the puzzles, which are a mixture of okay and less so. There are actually very few that were actually hard to solve with the exceptions of times when difficulty was artificially inflated, like hiding a useful object behind another object in a room full of useless items, or the adventure gaming sin of having to fly to another part of the world to pick up a common thing like a bottle of wine (from a bar no less, not a shop). Then there's the further adventuring sin Moebius commits of having random unannounced death moments. These only happen a couple of times and they're incredibly badly handled, plus for the love of god don't click "Restore" unless you've been saving everywhere as the game doesn't autosave and I lost two hours' play. Actually there's a third sin committed too: not allowing us to pick up items until they're useful. That sounds believable but there's a reason few adventures do it - it's a pain in the ass to remember where these items were and have to go all the way back just to get them.


The main innovation Moebius attempts to bring are Malachi's deductive powers, which try to make him seem like Sherlock Holmes but are more than a little ridiculous... not to mention tedious. The first "analysis" section can be performed on pretty much every character and several objects by clicking the brain icon that comes up. While the object checking one makes sense, and just involves matching parts of the item to similar items, the person-based analysis is stupid. Basically you examine different body characteristics (like "eyes looking around the room" or "twitching hands") and guess the reason for it out of three options. There are no clues other than the occasional ridiculous answer so it's literally just your best guess, and if you get one wrong you're not told which one is incorrect. It gets very tedious, very fast.

Then we have the "special" analysis moments where Malachi has to work out which person in history a character most compares to. After collecting a certain number of "data points" for a person Malachi announces that he can complete his analysis, whereupon you go into the character's folder on his phone and match the points up with a famous historical figure. Points like "they had a child young" or "they were smart" basically. After narrowing it down to three and then to a single suspect if correct Malachi announces that the person is a bit like this other person and you wonder once again how this twaddle could possibly help anything or anyone. It's not particularly fun either, which is worse.

Graphically Moebius doesn't look too bad, but the animation is terrible. Limbs stretch unnaturally, mouth movements are occasionally terrifying (god help you if you try to skip Malachi's assistant Gretchen's dialogue, I thought I was going to have to call in an exorcist), and Phoenix Online can be secure in the knowledge that they've made some of the worst walking animations I've ever seen. Malachi in particular is slow, awkward, far too bendy, and often reminded me of John Cleese doing a ministry-approved silly walk. Sound isn't much better off, with voice actors who just couldn't be bothered and utterly unmemorable looping music.

And then we get to the ending. I won't spoil any of the actual story (although it does completely peter out without any solid explanation of events) but the entire end section of Moebius is, without hyperbole, the single most tedious gameplay experience I think I have ever played. It's set in a series of dark barely-lit tunnels each of which is a static screen that doesn't scroll, it takes about an hour to get through and 70% of the tunnels have just one entrance and one exit (and nothing else in them) so they're literally just filler. As I trial-and-errored my way around these identical tunnels all sympathy I had for Moebius (I was actually starting to vaguely enjoy it) fell apart.


Literally nothing in this section has been done better than abysmally. Every screen looks the same. You think you've got through, you breathe a sigh of relief that a boring section is over, then you cut to another character and have to do it again - but with even less guidance. At one point you find an arrow showing you the way (which you're told 'points North' even though the screen makes it look West) and you have to actually go the opposite direction in order to find a vital item you need in a dead-end room, and if you don't then you die several rooms later (or if you forget to use it on a random bit of scenery you come across). When the characters meet they can't escape the way they came because Super Genius Malachi Rector didn't use a rope or think of any way of getting back out of these pits again. Then you have to wander around them a third time, with a map which just underlines how slow and tedious getting around feels when there's absolutely no point in doing it, followed by an implausible (at best) escape for a certain character that would've been better if they'd simply tied themselves to Malachi with that rope they had. Did I mention that every single screen takes several seconds to fade out/fade in and load and walking is unbearably slow?

People have said bad things about other Kickstarter adventures from industry legends. Tim Schafer's Broken Age was too easy and split into two. Charles Cecil's Broken Sword 5 was badly split into two. Al Lowe's Leisure Suit Larry remake showed how badly the original game stands up today. But all complaints about those seem petty next to Moebius: Empire Rising, whose only redeeming feature is that it wasn't split into two. It's dreadful. The story makes no sense and goes nowhere, characters are unappealing and badly written, puzzles are uninspiring and commit at least three Adventure Gaming Sins, and the entire end chapter of the game felt like I was actually being tortured. I'm sure the Gabriel Knight series is good but as far as I'm concerned this is where Jane Jensen's reputation dies. Avoid at all costs.

Clicking ‘Delete Local Content’ on the game “Moebius: Empire Rising” in my Steam Library. The skull puzzle in the Paris Catacombs was quite nice too. 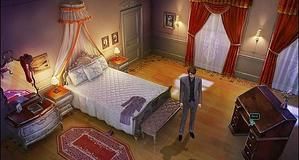