Monster's not in my pocket

If you don’t love Monster Trucks, I’m pretty sure you’ve never been near one. That riotous combination of ridiculously-scaled tyres supporting a regular-sized van chassis on pogoing suspension is absurdly comical to behold in real life, with the loud roar of oversized engines serving to ground the experience in terrifyingly real power. It’s a unique combination of spectacle and awe-inspiring torque, and one that I can only suggest people seek out; if nothing else you’ll come away in no doubt as to the appeal.

There have been a few decent stabs at capturing that loud, brash experience in videogame form over the years, and the latest is Monster Truck Destruction from Odd Games. The PC version is a straight-up no-frills port of their iOS game that debuted at the tail end of last year, which attempted to pull off a simplistic Trials-style approach with minimalistic controls wrapped around a responsive, playful and intuitive physics engine.


You begin, as with all other racers in this day and age, with $150,000 in your pocket and a bevvy of vehicles to choose from. Once you’ve selected a fully-licensed real-world truck that matches personal style, Monster Truck Destruction sets about offering a menu of single events, two championships and a practice mode all set on courses designed by the authentic Monster X team. There’s heavy metal blasting in the background at all times and a garage available to spend your hard-earned winnings on upgrades that boost your vehicle’s engine, intake, shocks, exhaust and various other bits.

The overall objective here is to win both the East Coast and West Coast championship, clawing your way through one upgrade at a time before taking on better opponents in expanded arenas full of new jumps and mounds. To do so you’ll need to master the two events at the core of Monster Truck Destruction: Freestyle and Drag Race. The inputs at your disposal are comprised of the arrow keys - and later on the space bar to jump - and that’s your lot.

As the most basic offering, drag races are simple point-to-point scrambles in mirrored tracks laid out in an arena with chalk and other debris as loose guidelines as to where to point your truck. The trick here is to be conservative with your inputs, minimising air off jumps and bumps whilst stabilising your truck with small nudges of the steering or accelerator whenever it threatens to wobble or overturn. Maintaining speed on the straights usually sees your truck cross the finish line first, though the circuits that feature criss-crossing ramps introduce a degree of randomness that can be both fortuitous and frustrating in equal measure.


Freestyle on the other hand, is a little more Tony Hawk. Your truck is let loose on an arena filled with jumps, cars, trucks and other destroyable props, with the objective being to chain together stunts and destruction for massive scores and multipliers. That’s not always as easy as it sounds either, with tight time limits between tricks necessitating a quick pace and steady tapping to bring your truck under control before boosting on to the next set of occasionally unintentional wheelies and flips.

For the most part both of those events are enjoyably short and bouncy, highlighting the quick bursts of gameplay at the heart of the original portable version. An exaggerated physics engine keeps things loose enough to create some huge crashes and silly spectacles, and it’s an entertaining challenge to try and find the best route through each course for maximum speed and ridiculousness.

As a pick-up-and-play arcade game then, Monster Truck Destruction has more than a few things going for it, but when you consider the finer details of the PC version, it’s quickly apparent that things aren’t quite right.

Firstly, this is as basic a port as you’ll ever find, right down to the on-screen text that defiantly tells you to ‘tap here to continue’. Graphically, the iPhone and iPad lineage is there for all to see, with blurry textures, basic lighting and generally underwhelming visuals from the get-go. Resolution options and either ‘low’ or ‘high’ settings are present and correct in the launcher - along with the ability to remap keys if you really hate those arrows so much - but don’t expect any luxuries such as gamepad support or direct access to any engine features.


As a medium-priced PC game (it’s currently going through GreenLight for its Steam release but is available on GamersGate for the grand old sum of £14.99), there’s just not enough effort in the port to make it worthy of a recommendation. Put simply, the portable version is available for free at the moment; it appears just as fully-featured and certainly wouldn’t lose any appeal on the small screen. Even basic multiplayer is entirely absent here, and the whole project is much more suited to a vastly-reduced pocket-money price point that’d make it a viable diversion to while away a couple of hours in short bursts.

It’s a mobile game then, essentially. As enjoyable as Monster Truck Destruction undoubtedly is at times, it’s not been fully-baked in the transition to the PC and the price point won’t reflect its nature without some heavy patching. If you can find it cheap in a Steam sale this Christmas then it’s certainly worthy of a chunk of change to take a look, but for the moment, pick up your phone and give it a try before even thinking about hitting that purchase button. 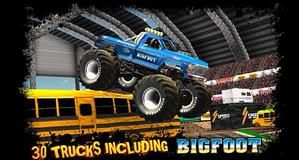