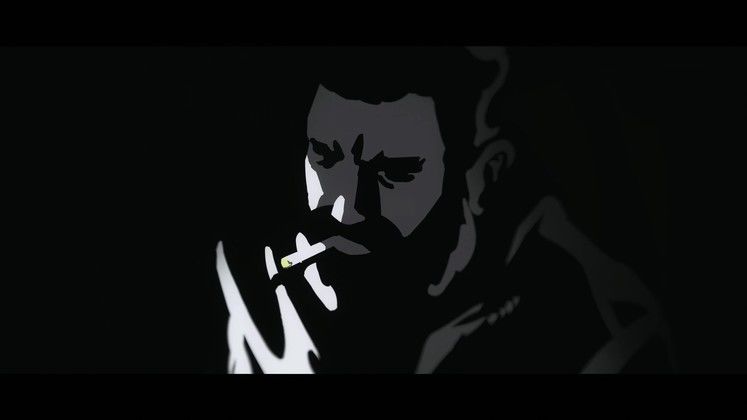 The most prevalent issue with mystery games (especially in the triple A market) is the urge to inject unneeded action. L.A. Noire is the most notable example, but plenty of games aren’t confident that their mystery can stand on its own without action set pieces. This is why Night Call piqued my curiosity. Making a noire game about conversation instead of combat is definitely a risk. But no matter how you feel about that, these types of games deserve our attention. No matter their quality, they made an effort to try something new in the lootbox era. With that said, let’s dive into its noire-tinted world.

Night Call stars a cab driver attacked by a serial killer on the streets of Paris. As the only survivor of their attacks, you are conscripted by the police to gather potential clues about the killer during your shifts. You only have a couple days to narrow down the suspects, so it’s a race against the clock (and your wallet) to find the perp. This tension is heightened by the police having dirt on your past and knowing your real name. Race plays a huge part in this, the protagonist being an Arabic man after a terrorist attack implied to be caused by Islamic extremists.

While Islamophobia isn’t the focal point of Night Call, it adds ample reason to find the killer. After all, being a fall guy is easier when you’re playing someone already marginalized. It’s not often you see a game be so clear about politics in its world, and that should be praised in an industry very flighty about political content. There’s also an air of satire around the game. Even though you’re trying to find a killer before they strike again, you still have to live paycheck to paycheck as you play detective and taxi driver. If you currently have two jobs (like me), this can hit close to home. 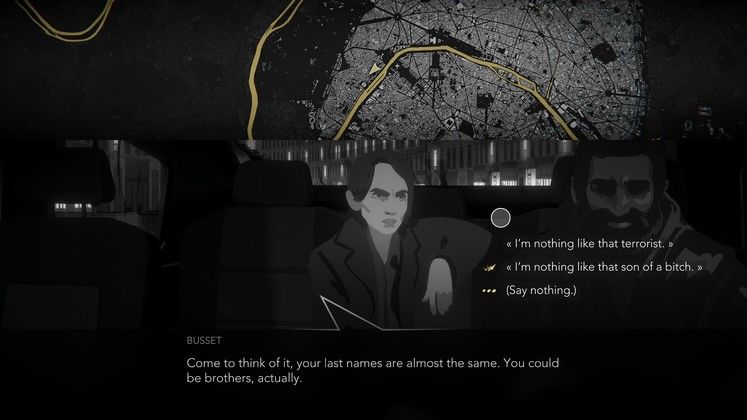 It’s also funnier than I expected. Playing a cab driver means you have to deal with obnoxious passengers and they add a lot of comic relief. If you’ve ever worked in a service industry, some will be very familiar. At one point, you have to help a group of drunks dressed as superheroes find their fifth member. It’s as hilarious and aggravating as it sounds. While the main conflict is interesting and there’s satisfaction to be found in figuring out who attacked you, it’s these smaller stories throughout the game that elevate Night Call to something special. There’s a diverse range of characters you meet on the job and it’s very easy to empathize with them. It makes it one of the few noire stories that’s unafraid to have genuine warmth.

I’m reminded of a ride you share with an autistic woman who asks you to change the radio to static. She talks about why it’s comforting and that lets you share a moment with someone misinterpreted by society. That’s only one story. From tourists who don’t speak the language to cops coming out to their coworkers, there’s tenderness in these fragments. Even in a world that treats the protagonist terribly, even with the darkness of the city, there is still warmth to be found in the people of Paris. Not all of them, but enough to know there are good people in the world. 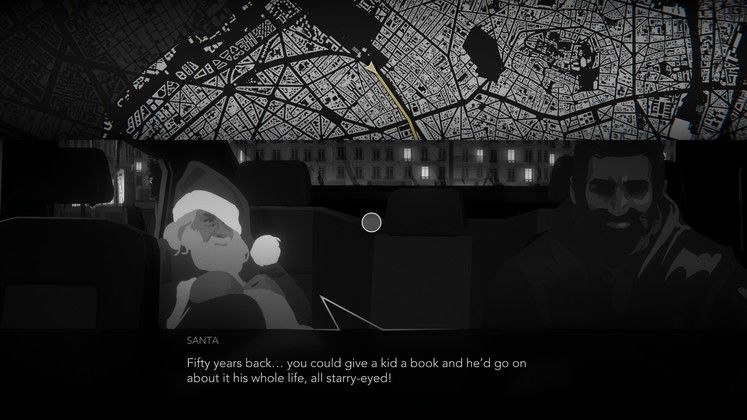 However, immersion breaks in absurd ways. The times it goes over the top is usually funny, like picking up Santa. Othertimes, it involves a holographic message from a dystopian future or the ghost of a boy killed during (probably) the June Rebellion. I can understand the reasoning behind these events, weird stuff happens on a night shift, but those moments never feel as earned as other story beats.

Gameplay is a mix of detective work and talking simulator. Both intertwine, but a greater focus is on talking to passengers around Paris. You have a choice to either check a lead or pick up a fare. Fares give you some much-needed cash and sometimes a rumor regarding the murders. Focusing on the investigation gives substantial clues without income. The investigation gives you five possible suspects on a tackboard when you begin. Narrowing them down will require connecting the dots and finding out which clues matter the most. With three possible serial killers to deal with, you have a chance to deal with increasingly brutal murderers and plenty of red herrings. 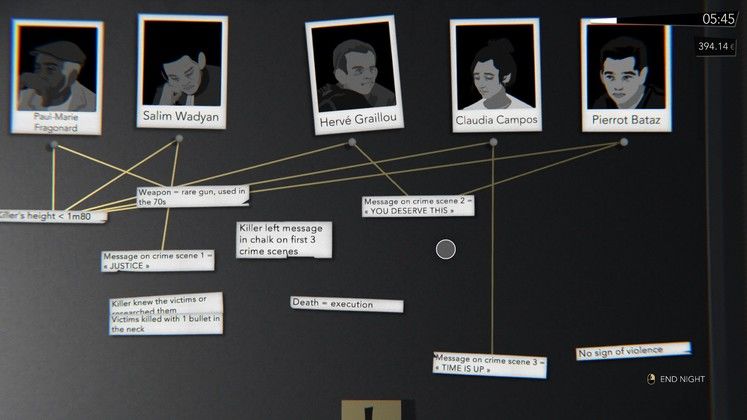 The majority of time in-game is talking to passengers and reacting to what they say, making it more akin to a visual novel. How you decide to talk to them is up to you and it can affect the tip you get. You also learn in time which passengers tip and which can’t pay the fare. The game also tracks the passengers you’ve met across playthroughs, giving you more incentive to replay. That replayability might only appeal to completionists. It’s a repetitive game by design, and its loop can lose its luster near the end of a case. Its writing makes up for its stumbles, but it can make it a hard sell if the premise doesn’t grab you. This is doubly true when you pick up a passenger you’ve already helped, the lack of a “skip text” feature is noticeable in those cases

It’s a difficult balance, especially with the short length of a single playthrough (around one to three hours). The game’s main challenge comes from income, and it perfectly encapsulates the economic anxieties of being poor. Losing money isn’t a minor problem like in other games, it is inevitable. With gas you need to buy, information to bargain for, and the rent of your small apartment, it’s highly unlikely you’ll make a profit. It’s a game of attrition where you scrounge for what you can before you lose it all. Night Call is very reminiscent of This is The Police: another game that has a strategy-esque focus on crime and a distinct art style. Both games have time and money as your greatest enemies and both games are interested in the tension of transportation. The difference is that Night Call knows that crime fiction matters more when you care about the characters. 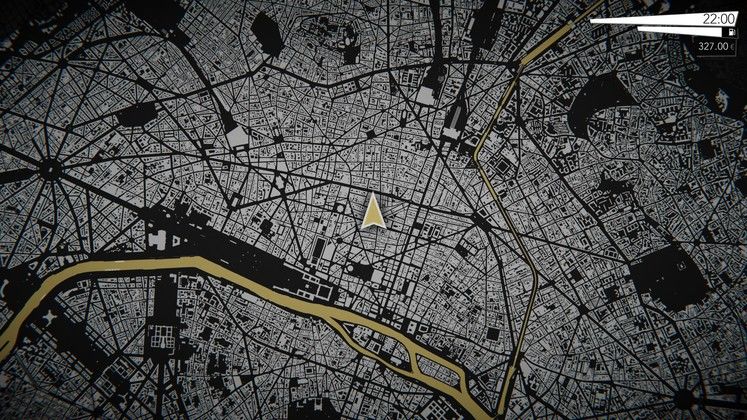 Like every other noire game, Night Call is obsessed with black and white. It uses yellow for your map and red for spent money, but is predominantly monochromatic. It works well, though it is exactly what you would expect from the noir genre. What stands out the most is character animation. Each passenger has unique posture and animation unique. It’s a wonderful way to show character, even with what little time you have with them.

Since it’s a game that can even run on Windows 7, it shouldn’t have any troubles on your computer. It ran smoothly on my rig and there were no stutters or crashes. I did experience two bugs: one that skipped an entire conversation with a passenger and one that didn’t continue after another, but they were infrequent enough to not bother me. 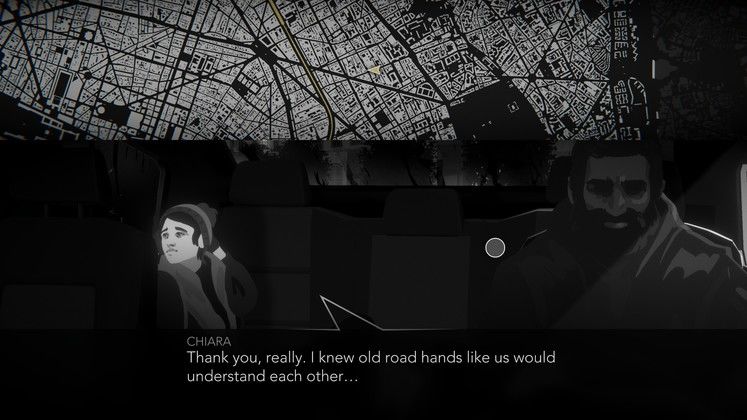 Night Call is interesting in ways most games aren’t. It’s a game that humanizes people that usually get mockery. It’s so good at this that it overshadows the serial killer stuff. It can lose its steam thanks to some repetitive gameplay, but its shorter length prevents it from dragging on. Its design choices will turn away action-oriented players, but it’s a pleasant surprise if you want more compassion in your crime fiction.

Talking with a bearded woman who felt comfortable enough to not shave after a trip abroad. It’s the only time I’ve seen a woman with facial hair not treated with scorn or derision in a game. 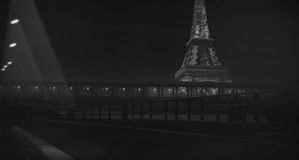