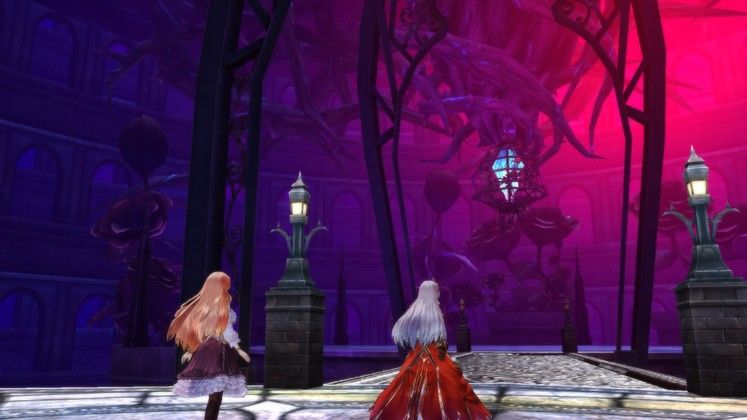 Nights of Azure is a tricky one to place into conventional categories. At first look, it appears to be a JRPG with some fairly non-conventional, but not completely unique, traits. Going into this with the clear notion of you reaching its end in around 12-15 can either save you from a troubling first few or have you high-tailing it out of here already. It’s not a traditional JRPG like you might expect from GUST, but instead, a bursty, average-length action game that feels a little like a 3D take on the Ys series.

In a nutshell, the story of Nights of Azure plays out like many other ‘Doomsday’ RPG scenarios. Across a number of years, the little island of Ruswal has been under the watchful gaze of the Nightlord. Now sealed away in an ever-present moon above the sky, it was once thwarted by The First Saint whereupon its Blue Blood rained from the sky and turned any unlucky person, object or animal into a creature of the night. Arnice, being a rare byproduct of the event, is now a half-human/demon hybrid whom the land’s authority - the Curia - have summoned to deal with the Nightlord as it gets ready to break free from its shackles and cast the land into perpetual night once more - a state which, gruesomely - entails everyone falling to sleep and slowing dying as they slumber.

It’s up to you to travel around the island’s interconnecting landscapes to beat down some demons and either save the world with brute force or escort the newly elected Saint to the doorstep of the Nightlord ready to be offered up as the next seal. You can probably tell where this is going already. Cliche love interests and conspiracy theories!

You’re introduced to the seemingly star-struck lovers of Arnice and Lilysse right from the get-go and will forever play as the crimson haired half-demon for the remainder of the game.

The generalized tutorial wraps up a decent enough pace, but some of the game’s subsystems either take far too long to be introduced, stopping you from getting on with things, or simply needn’t be explained in the first place. Through it, you’ll learn the basics of combat - which boils down to a standard 3-hit ‘Basic’ attack with a different ‘Heavy’ attack being usable by breaking up the stream of X presses during each combination.

Though you’re stuck with a fairly repetitive longsword for a while, a few extra weapons open up as you grind on enemies as use their ‘Blood’ to boost yourself up to the game’s Level 10 cap by way of offering it to your sword in a dream world while wearing significantly less clothes than usual.

But it isn’t just you against the demons. You’re pitting other demons against their comrade by way of your Servans - a team of 4 creatures that will fight by your side whenever summoned and stay there until they’re beaten into oblivion. Specializing in their own specific roles, you’re able to ‘Actualize’ a decent collection of these monsters to switch out across multiple ‘decks’ over the course of the game, but I managed to play through the entire thing with ease without ever having to bother with anything but the five you’re given from the start. 2 aiding in attacks while one chimed in with the occasional heal and another ready to throw down a shield whenever necessary - which was basically never.

Though fighting against the constantly spawning waves of enemies as you dash through zone to zone goes by relatively quickly thanks to the overall stopping power of you and your demon troupe, it feels incredibly repetitive and sluggish in the early stages until you unlock the varied attack patterns of the additional weapons as time goes by. The initial sword acts like a fixed speed limit on a road until things ease up with the daggers offering blade-dancing potential before the hammer comes in to deal with moments where the extra mobility is wasted. There’s a gun, too, but it slots more into a support situation that’s never apparent.

Locking these behind what is essentially a tacked-on progression system feels like just one of its needless shortcomings as the first few hours are spent mindlessly mashing the same 3-step combo over and over rather than having the freedom to switch things up a little from the get-go. Combat, for the most part, feels particularly satisfying once everything is unlocked, but the overall difficulty level feels incredibly unforgiving with my own ‘wall’ only showing up in a 1-hour stint with the final boss. Something that, with a little foresight and patience - a luxury rarely achieved with a review copy - is very much a viable 1-shot scenario.

Across the entire 12 hour playthrough, I was able to reach a character level of 9 while my Servans reach the max of 10. Though there’s a number of side-events to take up within the hub ‘Hotel’ from 3 of the blandest characters I’ve ever come across, they’re rarely necessary to advance the main story nor enticing enough to ever consider finishing in full. Maybe it’s down to how the game throws giant ‘EVENT’ markers at you with every insignificant step you take with many of these simply being one or two lines of dialogue that does nothing for anyone involved, but you just don’t want to entertain their rambles after the first few attempts.

You can see where GUST hoped to go with this one, and maybe why they’re putting out a sequel a little later in the year. Nights of Azure is very much a budget title of which has actually caused my expectations of their beautifully designed Blue Reflection to take a massive hit in the process. Their artists are always on-point when it comes to drafting up eye-catching characters, but the rest of the team seems incapable of putting them to good use. The environments look like they could be whipped up and implemented before the daily lunch break while the character models and animation take a seat on the back-burner, too. Out of the whole soundtrack, there’s only one or two pieces that really stand out, but I’ll put that to a mixture of my own particular musical taste.

The experience isn’t without a few interesting ideas, though. The dozens of available Servans present a strong case for some strategic thought when it comes to difficult encounters - but there’s never any to speak of. Enemies fall within seconds before you’re presented with more, and you carry this one with the same rinse and repeat combo execution until you’ve traversed enough loading screens to reach a boss that falls within the minute. It’s fun for a time, but you’re just constantly pondering when or if the grind will unlock something a little more exciting further down the line. And it does. But by that time, it’s already too late. And without the need to consider other Servans, you never get a chance to see anything other than Arnice’s ‘Demon Forme’ when you’ve bashed enough heads in any one trip outside the hotel.

Nights of Azure is very much a bare-bones PC port, but not one that’s badly optimized. Though the launcher screams the design of something whipped up in 10 minutes, the game itself runs just fine. Sadly, however, it’s seemingly locked to resolutions no higher than 1080p even though anything above would have likely smoothed out the rough edges of the character models far better than the minimal anti-aliasing toggled through the launcher.

There’s nothing more than limited resolution options, Depth of Field and Anti-aliasing here, so don’t expect the definitive PC experience. Saying that, I easily maintained 60FPS with a GTX 770 and FX-8320 combo on 1080p with what we can technically say was ‘maxed out’. No dips. No crashes. It’s solid.

While the opening hours do nothing to rid your mouth of a slowly growing taste of disappointment, Nights of Azure eventually manages to claw you back once some of its more interesting combat mechanics begin to shine through. It’s relatively short length aids the process, but also comes under fire when you consider the bare-bones storytelling. It’s a difficult sell, but one I hope GUST can rehabilitate with the upcoming sequel.

Finally unlocking the daggers and proceeding to run circles around pretty much every boss in the game makes you feel like the worthwhile heroine Arnice is painted to be. Nothing stands in her way - whether that makes for a better game or not.