Fifteen times. That’s exactly how many tries it took me to defuse my first proximity mine in Oddworld: New ‘n’ Tasty. You see, the method for defusing these wretched things is seemingly quite simple; you interact with the mine when it flashes green (safe), not red (unsafe) and then our plucky protagonist can hop on by with all of his limbs stuck together as nature intended. The cause of such failure though, is that the difference between pressing the interact button and the animation kicking in is a fairly substantial amount of time and thus, the reason for my repeated and embarrassing failure soon becomes obvious.

Standing as one example, while such game mechanics seem trite and outdated, they invariably stand as testament to developer Just Add Water’s reticence to alter the design DNA of a nearly eighteen year old classic. Thus, such is the case with Oddworld: New ‘n’ Tasty. A retina-searingly gorgeous remastering of one of the most cult puzzle platformers of yesteryear, the game will assuredly delight those who have already plumbed the depths of its charm, but also might frustrate those who have yet to do so. 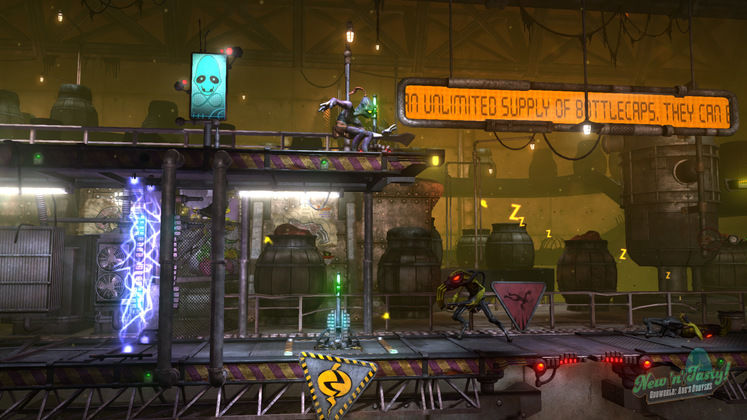 The overhauled visuals are undeniably impressive

Casting players as Abe, a Mukodon slave at the Rupture Farms meat processing facility, our hero soon discovers that his own people will soon be fed to the meat grinder to keep profits up (low cost ingredients and all that), and so he embarks on a journey to free them and force the downfall of their corporate captors.

A loveable, if seemingly hapless protagonist, Abe’s journey through the Rupture Farms factories through to the ancient lands that lay beyond proves to be an engaging one. While the other Mukodons that you free are largely clones of one another without any real individuality to speak of, saving each and every one of them nevertheless proves to be both a compelling and satisfying act as their twee and humble forms dash to the nearest portal with innocent glee.

Between the beginning and end of his odyssey though, our plucky Mukodon has a lot of platforming and puzzling to be done and it’s these dual elements which form the backbone of the Oddworld: New ‘n’ Tasty experience.

As a platformer, New ‘n’ Tasty will feel strange to the uninitiated. Often feeling stiff and unresponsive, Abe’s traversal of the game’s side-scrolling scenes can feel a world away from the more smoothly articulated genre entries of today. From his plodding pace to his unsteady jumping, Abe can often feel lethargic and while this is very much in line with how he controlled back in 1997, it’ll take a fair whack of tolerance from new players to overlook it in the short-term. 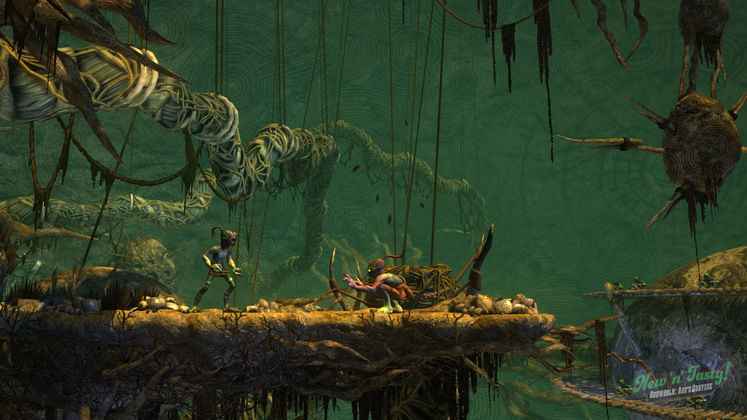 As in the original game, mastering communication with your fellow Mukodon’s is key

In regards to New ‘n’ Tasty’s brain-tickling conundrums, they, like the platforming elements that underpin them, originate from an earlier era of gaming’s pantheon. One of the biggest elements of New ‘N’ Tasty’s puzzle-solving is avoiding the enemy while freeing your fellow enthralled Mukodon brethren. The reason for evading your foes rather than face them head-on as the games of today might encourage, is simple; Abe is both fragile and almost always without a weapon with which to do harm to his captors, so confrontation without a plan tends to end in failure pretty quickly.

Rather, in lieu of employing brawn as a solution, the freedom-seeking Mukodon must instead utilise elements of the environment to stymie his aggressors. From switches that open abyss-concealing trapdoors, to re-purposing proximity mines (those infernal things!) to blow enemies into chunks, Abe usually has a clear way with which to do away with his foes before the business of liberating his brothers and sisters can begin. Our hero can also leverage a variety of psychic powers to possess creatures and enemies to force them to do battle with one another, which, along with the variety of puzzles in the first place, ensures events stay fresh and varied.

The Gamespeak system from the original Abe’s Odyssey also makes a return in New ‘n’ Tasty and through it, Abe can dish out commands to his fellow Mukodons commanding them to follow him, stay or just, you know, fart. Where things get especially tricky is when the player is required to execute a number of jumps or sprints, in addition to triggering these traps, giving out Gamespeak commands and other context-sensitive actions in sequence.

Because of this and like the source material it’s based on, New ‘n’ Tasty is a staunchly challenging affair, yet it can seem especially frustrating at times where the context-sensitive actions, such as hanging on a ledge, or picking up a grenade, stack up onto each other. Put simply, picking up an item off the floor when you should be jumping up onto a ledge to escape a chasing enemy can prove quite frustrating indeed as Abe ends up six-feet under due to no fault of the player.

Compounding these frustrations, are the instant death scenarios liberally sprinkled throughout New ‘n’ Tasty’s duration. From regular kills by prowling foes, to exploding mines, electrocution, natural predators and just about everything in between, its fair to say that if there is a way for Abe to die at the drop of the hat in the game, you’ll ostensibly find each one before the credits start rolling. 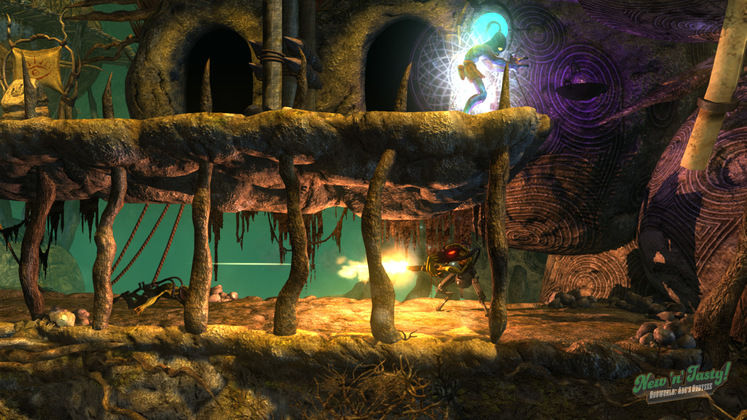 More than just a platformer, New ‘n’ Tasty demands that the player solves puzzles by use of Abe’s unique psychic powers

Luckily, where these situations might have resulted in the sort of scalp-rending anger synonymous with the original game, in Abe’s 2015 tour, a handy quicksave feature allows players to neatly sidestep New ‘n’ Tasty’s otherwise unforgiving checkpoint system.

Clearly though, the biggest evolution that New ‘n’ Tasty boasts over it’s late 90’s inspiration can be seen in its visuals, which are smooth, detailed and brimming with character. With the heightened levels of detail lending the aesthetic an incredibly pleasing, almost claymation look, Abe, his crew and the worlds that they inhabit look resplendent in their 2015 duds and as such, it’s fair to say that New ‘N’ Tasty is positively overflowing with polish.

A game that is comfortable in its own skin and endeavours to toil within its own ambitions is rare, yet that is exactly what Oddworld: New ‘n’ Tasty achieves. Such honesty should be applauded even if it does little to endear new fans to the fold who might be at risk of not properly adjusting to New ‘n’ Tasty’s idiosyncrasies. Still, for those who take the time to persevere, New ‘n’ Tasty proves to be as delectable a treat as Abe’s original Odyssey all those years ago.

Taunting a Slig into giving chase as it clumsily stumbles into a mine that you primed earlier, causing it to explode in a shower of Slig-gibs. 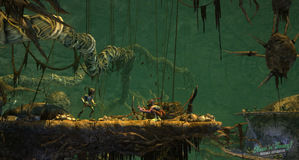 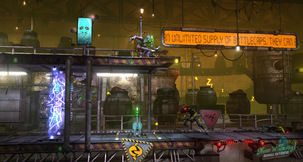