If you’ve ever felt like the DiRT series focussed too much on obscure capitals and not enough on muck, then Off Road Drive is the game for you. Not only is its title grammatically correct, no other racer I have encountered simulates filth quite so well. Be it earth, mud, grit, soil, sand, quicksand, bogs, marshes, sloughs, swamps or quagmires, Off Road Drive has trawled through the thesaurus and ticked them off with its grimy finger.

While the comparison with the formerly Colin-McRae-centric series is apt to some degree, there is one very important difference. While DiRT and its sequels have pretensions of grubbiness, they are still very much centred on speed and style. In Off Road Drive going fast comes second to going at all. The primary objective is simply to get your hulking, petroleum-guzzling 4x4 vehicle to the end of the course.


Other driving games generally allow the player to concentrate on three things; accelerating, steering and braking, usually in that order. If you’re a hardcore racer you might occasionally touch the handbrake, or even brave the dark eldritch realm of manual gear changes. If that’s your idea of a racer, then prepare your exhaust pipe, because Off Road Drive has a surprise for you.

Thinking about it, that last paragraph wasn’t really necessary. I could have summarised the severity of these courses simply by saying “your car has a winch”.

Mastering these driving techniques and learning to alter the set-up of your car on the fly is the only way you’ll ever reach the other end of the course. At the same time, this is still a racer (although the nature of the racing is a bit weird, as I’ll explain later), so knowing when not to use these techniques is equally important.

Say, for example, you come across a long stretch of deep water. This requires four-wheel drive and a low gear ratio. Yet immediately afterward you encounter a series of sharp corners. Now you need to return to two-wheel drive so that the car turns sharper and better navigates the corners. Fail to do this, and while you may complete the course, it may well be in last place.

But why should you care? Well, a higher position earns you more points, and points unlock new courses in the career mode and bigger, better cars to chew them up with.


I say “career mode”, it’s really more of an old-fashioned single-player, in that it doesn’t have that superficial yet undeniably compelling framework of agencies and contracts and career progression that you would find in a Codemasters game. It really is a case of a good race unlocks more cars and more racing environments, which is fine because the racing environments are really quite wonderful.

I already mentioned the racecourses in terms of their construction, but aesthetically they’re also quite something to behold. I’m not talking about graphical fortitude here. It’s how 1C have captured the essence of these places that is so impressive. You can almost feel the cloying heat of the thick green jungles of Malaysia and Thailand, the aridity of the African savannah, and my personal favourite, the cold, crystalline beauty of the American Rockies and the Russian Caucasus. With the sunlight shafting through the icy air and the towering pines on these latter stages, I almost wished I could get out of the car and just bask in the game’s wonderful world-craft.

The cars look decent too I suppose, but as I said earlier, it’s the muck and grime that’s the star of the show. Dirt and dust cake your car at every corner, and deep mud acts as it would in reality, sinking under the weight of the car as the tyres slice great ruts through the soft earth, and water pools in the bottom of these newly created channels. Then you come to a patch of clear water, and all that muck washes off the car, leaving a spreading brownish pool in its wake.

As a driving experience, Off Road Drive is refreshing and well executed. However, as a racing game it’s confusing and underwhelming. For a start, you don’t race against other cars. Instead it’s a sort-of time-trial exercise, including a ghost car that presumably resembles the first-place time. As for the other positions, only the numbers on the top-left of the screen give any indication as to where you are in the field.

To be honest, I’m not entirely sure how the game ranks your performance on track. Often I would finish fourth or fifth just for the final ranking table to place me one or two positions above where I believed myself to be. It isn’t particularly compelling racing against a white outline of another car. I understand why 1C have done this, for the most part the tracks simply aren’t wide enough to accommodate a large number of cars. But a slightly wider track with five or six cars on it would make for a far more interesting race.

Also, the game makes the terrible mistake of putting one of its hardest tracks first. It’s a Thailand track that consists almost entirely of deep mud in which it is extremely easy to get terminally stuck. Luckily the game has a manual respawn button, but it fails to inform you of this in the tutorial, and respawning just to get stuck again is immensely frustrating.


Finally, while the car physics at low speeds is spot-on, at higher speeds the handling starts to feel loose and spongy, and if the car leaves the ground at any point it bears more resemblance to a magic-carpet than an off-road vehicle. The lack of a damage model doesn’t help with this. Come into contact with anything and the car bounces off the obstruction like a giant school rubber.

In the end, Off Road Drive’s novelty and the simple joy of navigating its beautiful and challenging courses outweigh the lacklustre racing component. It’s worth playing just for the heightened challenge the tracks themselves provide. And while it may not have earned the right to DiRT’s crown as king of off-road racers, it has certainly earned the right to DiRT’s name.

In the end, Off Road Drive’s novelty and the simple joy of navigating its beautiful and challenging courses outweigh the lacklustre racing component. It’s worth playing just for the heightened challenge the tracks themselves provide. And while it may not have earned the right to DiRT’s crown as king of off-road racers, it has certainly earned the right to DiRT’s name.

Covering the car in a layer of mud before splashing through a stretch of crystal-clear water. 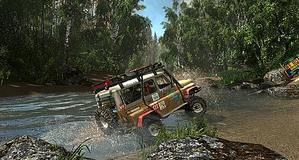