There are things in Russia which are not as they seem 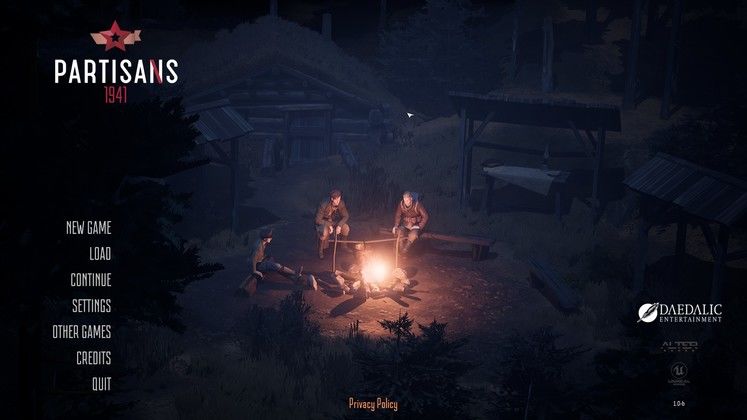 As a fan of Desperados and the surprisingly overlooked Robin Hood: Legend of Sherwood, Partisans 1941’s real time tactics/stealth premise rather attracted me. Here’s a modern game going back to a genre that’s been mostly dead for decades, and broaching a time period untouched since Commandos – a guaranteed way to create a lot of potential, and a lot of reservations.

Partisans 1941 takes place in the early years of World War II, a couple of months after the onset of Operation Barbarossa – the Nazi attack of the Soviet Union and the largest invasion force in the history of warfare so far. As part of their ideological goal to conquer part of Russia and repopulate it with Germans, the Wehrmacht forces took several cities and imprisoned soldiers and civilians alike as their troops advanced eastward. 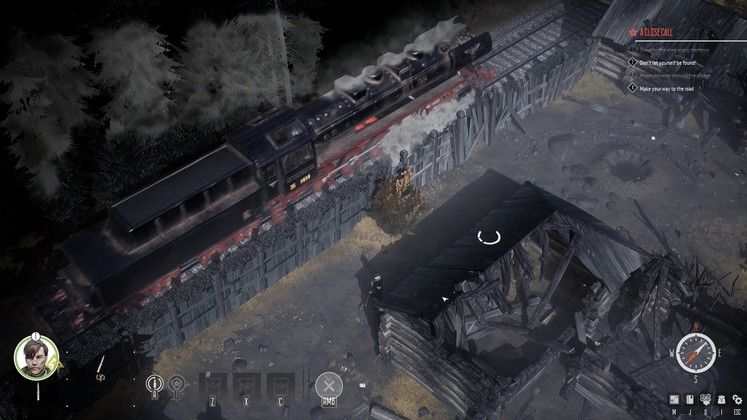 You start the game as one of those prisoners – Commander Zorin, a former captain of the Red Army and current would-be escapee of a Nazi prison camp. Escaping the facility during the tutorial, Zorin quickly finds like minded people nearby and proceeds to build a little camp to take the fight back to the Germans, guerrilla style.

The core gameplay of Partisans 1941 revolves around real time tactical missions played from a top down perspective, very similar to Desperados or Shadow Tactics. Controlling up to three characters – all of which must be individually ordered – you will sneak, stab, and shoot your way through the German occupation. 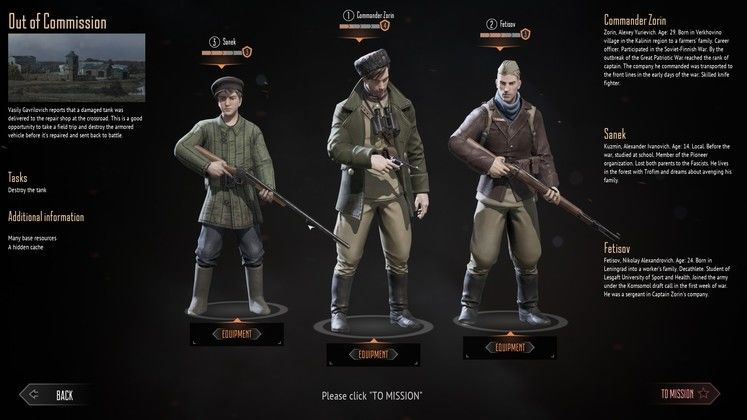 These missions often involve resistance objectives, like killing patrols or destroying supplies, and are built on a mix of stealth and firefights. While you are able to sneakily position soldiers for an ambush and let them fire at will, 99% of the time you will be constantly changing focus between all three partisans and micromanaging their behaviour.

In order to make things more sensible, you can hit Space at any time to freeze the action – or severely slow it down if in combat. This slowdown mode lets you give multiple characters a single order and execute them at the same time, or grant you a bit more time to think or manoeuvre a soldier during intense combat situations. 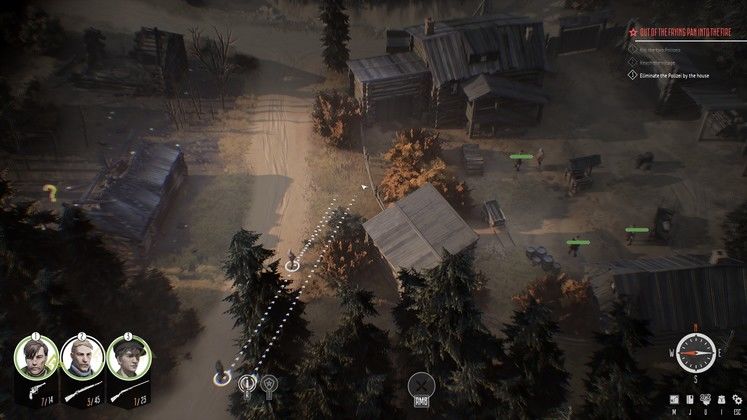 Those combat situations are often tense, mainly due to the scarcity of ammo. Partisans 1941 is rightly pretty big on scavenging, forcing you to loot dead enemies and pry open crates to gather supplies for your camp. Some of those supplies can be used on the mission, like ammo and grenades and traps, but some of them are carried off-mission to help you upgrade your camp.

The camp itself acts as a break for all the real-time action, acting as short spurs of turn-based management. Each day, you assign partisans to build things, run errands like fishing or scavenging, or send them to the medical tent to heal any health lost on missions. You can also send soldiers on assignments – missions that don’t need playing – between actual missions that need playing, including story missions that can’t be skipped or postponed. 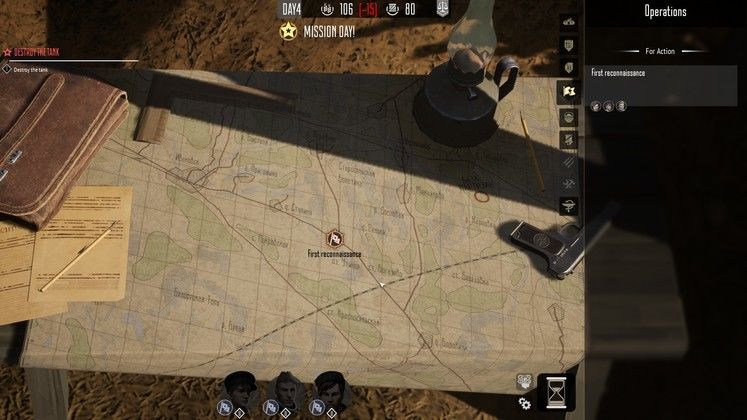 As you complete missions, your characters level up and gain skill points. As all characters are premade, they also possess unique skill trees that naturally streamline them towards certain roles. There is a small amount of wiggle room, like the ability to train a soldier in either pistols or rifles, for example, but if you want them to use whatever gun you want (like a shotgun), you’re out of luck.

While on paper the game sounds fine, the execution unfortunately leaves a lot to be desired. While binary stealth is bad in the worst of times, Partisans 1941’s implementation is especially egregious – being spotted by a single sentry means whole platoons will instantly be alerted of your position with 100% accuracy, often spinning 180° on the spot and firing a shot at your characters like a legendary Wild West gunslinger. Even worse, some actions like stabbing someone with a knife sometimes are almost completely silent and sometimes alert everyone in a 15-meter radius, while sleeping soldiers magically spot you at random if you kill someone in front of them; even if you’re 30 meters and a house away from their slumber spot. 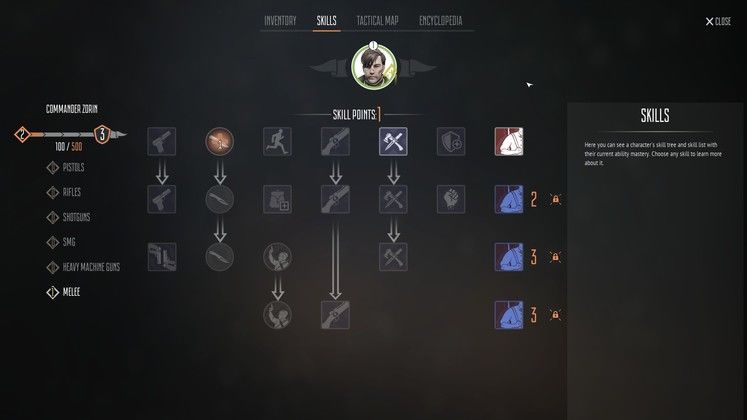 Similarly, a lot of pretty core functionalities are either missing or badly designed. Items in the inventory have no tooltips, requiring you to right-click, browse a list, and then click a description button just to find out their name. The inventory itself is essentially useless, as it requires you to move ammo and items between soldiers but lets you do it instantly even during a firefight – instead of a universal inventory that would let players focus on the engagements and the game itself, it instead acts as an arbitrary mechanic that adds nothing to the game besides busywork and feels shoved in just for the sake of checking a to-do box.

You can’t even see soldier’s view cones by holding a button like in Desperados, and instead must right-click each individual soldier to see their – and only their – cone. As a result, those small and big issues add up to a lot of grievance over time, taking the intrinsic potential frustration of the stealth genre and turning it up to 11 thanks to finicky movement, cumbersome inventory management, and binary detection systems that are way too unforgiving. I came into Partisans 1941 expecting to love it, but came out deeply annoyed by its rough edges and thoroughly tired of having to constantly reload because sleeping soldiers spotted my characters halfway across a village. 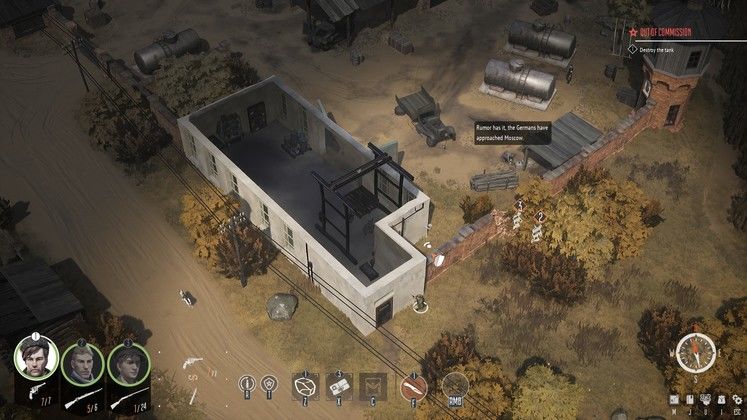 Still, this is a game in a rarely explored genre nowadays, and it does offer the interesting experience of fighting a guerrilla war on the Soviet front – a rare occurrence outside Russian games. If you are a fan of this kind of title and have a lot of patience for rough edges and frustrating stealth, Partisans 1941 might actually be worth a shot.

A capable and interesting stealth game let down by a few too many noticeable issues.

Dispatching a number of sentries with a knife silently before successfully triggering an ambush that took out a whole patrol in one volley. 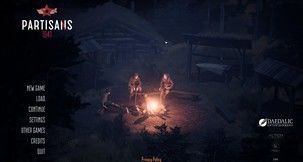