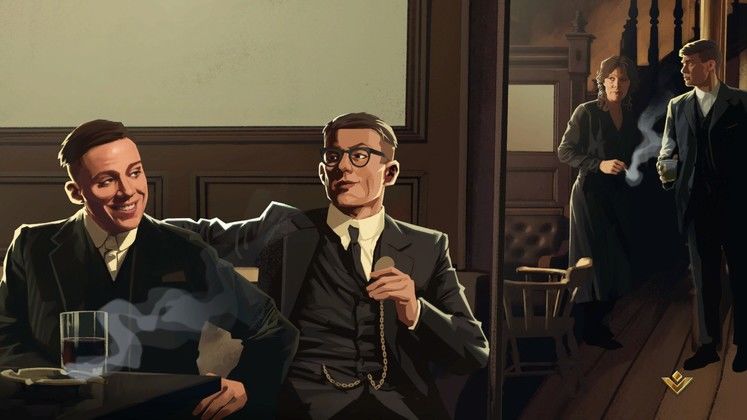 We are in an interesting era of adaptation-based games. Pushing away from the approach of “take a mainstream genre and use the setting as wallpaper” that was common a couple generations ago, developers are a bit more open to explore these settings mechanically. From Terminator: Resistance’s predatory portrayal of their namesake in its introduction to Dragon Ball Z: Kakarot’s episodic open world, we’re seeing developers understand the appeal of both the media they’re adapting and the mechanics that would fit in said media. Obviously, it’s not as cut and dry as that, but there’s more experimentation than previously. When I started Peaky Blinders: Mastermind, it was not on my list of British TV shows that should be made into a game (the top of that list is obviously Garth Marenghi’s Darkplace). Nevertheless, it’s what we got and it’s not the type of game you’d expect.

One Microscopic Cog in his Catastrophic Plan 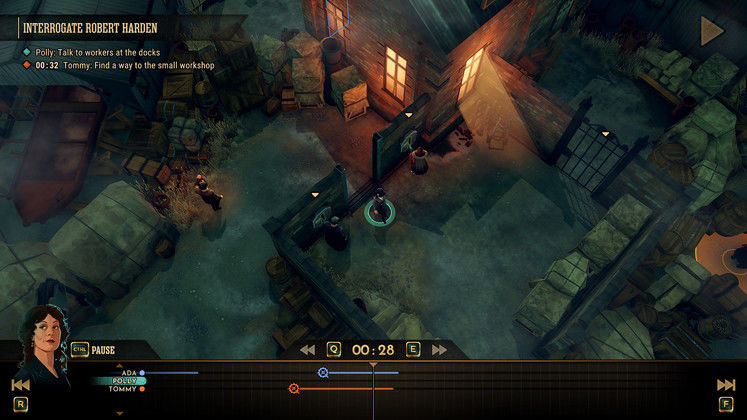 Peaky Blinders: Mastermind tells a story before the show’s first season about the Peaky Blinders dealing with multiple gangs and the police after they stole champagne from the Gilroys. With murder and trechery afoot, it’s up to Tommy and the Peaky Blinders to figure out the truth and prevent a proper gang war from blowing out. Even though this game is a prequel to the show, it’s not a great introduction to these characters. This is made for people who know and love these characters, so make sure you watch a season or two before you dive into Mastermind.

It might use the characters of Peaky Blinders, but it doesn’t use the performers of Peaky Blinders. This isn’t like Telltale’s Game of Thrones, so you won’t be hearing the talents of Cillian Murphy or Helen McCrory. Their likenesses are used, but that’s it. It’s not the biggest problem, but it’s definitely one of the issues of adapting prestige television to gaming. Even if they got everyone to act in the (static) cutscenes, it probably wouldn’t help that much. The story, while functional, is forgettable. Even with how short this game, I couldn’t tell you a moment that stood out narratively. Adding to that is the game’s bizarre choice in music. Even as this game takes place after the Great War, there’s a lot more electric guitar and hard rock beats than you’d expect. At points, it sounds like an advertisement for the new sports game rather than a stealthy crime puzzler. So while it fits with the show’s soundtrack, it can be a bit disorienting if you know nothing about Peaky Blinders. 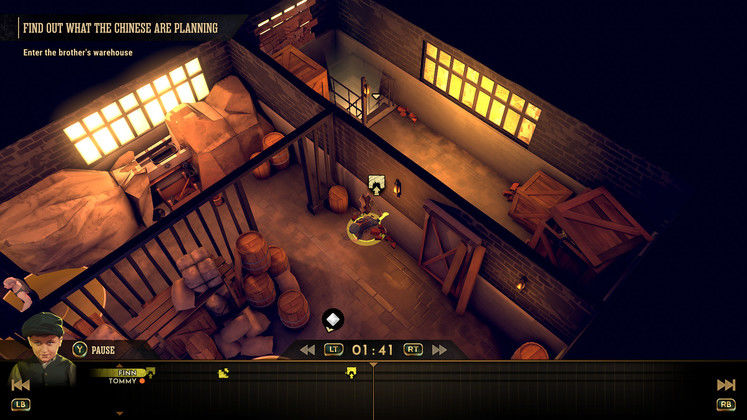 Mastermind is a little hard to explain mechanically, but I’ll try. As a game, it’s a stealth adventure/puzzler where each level has you complete a certain set of tasks in an allotted amount of time. This is done by directing everyone in your crew. But this isn’t a real-time tactics game. Instead, you rewind time so you can play each character individually and have them all function at the same time. Each possible family member has their own skill set, from bribery to straight-up fisticuffs. For instance, you can use Ada to distract a police officer whilst Finn can steal his keys to unlock a gate. It’s surprisingly unique, and it’s UI makes it clear what everyone is doing. It’s like you’re using editing software, seeing what each crew member is doing and how long it can take.

If someone is caught by an opposing gang member or the cops, you can rewind time and fix your mistakes. While this might sound like there’s a bunch of possibilities, there’s a single solution to most problems as Mastermind leans more towards puzzler. Instead, the focus is on finishing a level as fast as possible. That might sound weird for a game where you can rewind your mistakes, but it’s not easy to be as efficient as possible. It’s not hard to finish a level, as many solutions are straightforward. But finishing a level as fast as possible whilst never getting caught and finding every collectible is what gets you a perfect score. 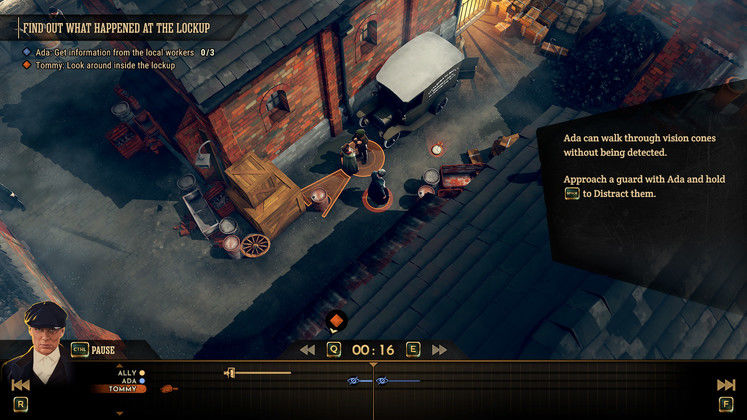 This is basically a game about micromanaging. You will need to play every character in your party to solve puzzles with skills only they have and they all need to be perfectly timed. In practice, this feels more like you’re playing the same level multiple times. The problem with this system is that it’s not satisfying. It runs smoothly enough and it makes sense after you understand what you’re doing. You’ll be rewinding time constantly just to shave a couple seconds off your run, and it never feels worthwhile. There’s neither tension nor challenge, just trial-and-error of an unpleasant kind. You’ll feel like a meticulous planner, but you’ll never feel like a full-on mastermind.

I almost finished Peaky Blinders: Mastermind. However, my progress was wiped at the last level, and I’m not sure why. Maybe it was the type of patching that comes from preparing a game for release, but it’s as frustrating as that sounds. However, it only took me 4-5 hours to get to the last level, so it’s not the longest game out there. I won’t try to finish that last level. The gameplay bogs itself down too much to be worth replaying nor did I care about this game’s story enough to see how everything gets solved. That’s the great tragedy of Peaky Blinders: Mastermind. Even with its novel way of doing a puzzle game, actually playing it felt unnecessary. Thus, my time ended with Peaky Blinders: Mastermind there. Not with a bang, but with an awkward loss of progress.

While Peaky Blinders: Mastermind has some style and a novel approach to puzzling, it’s not enough to properly engage. It definitely clicks at times, and there are moments where solving a problem makes you feel like a meticulous planner. However, there aren’t the eureka moments you’d expect from better puzzles nor mechanics worth mastering in replays. It’s hard to recommend and it’s only for a niche of Peaky Blinders fans who want an average puzzler with a lot of dull micromanaging (if they even exist).

You are, at one point, allowed to pet a dog. 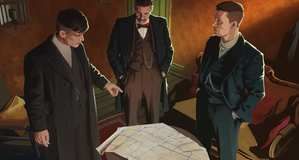