In Ascaron/Encore's latest offering, "Pirate Hunter," players can relive the golden age of piracy in the Caribbean as sailing men from the nations of the four great powers of the period, Spain, Britain, France or Holland 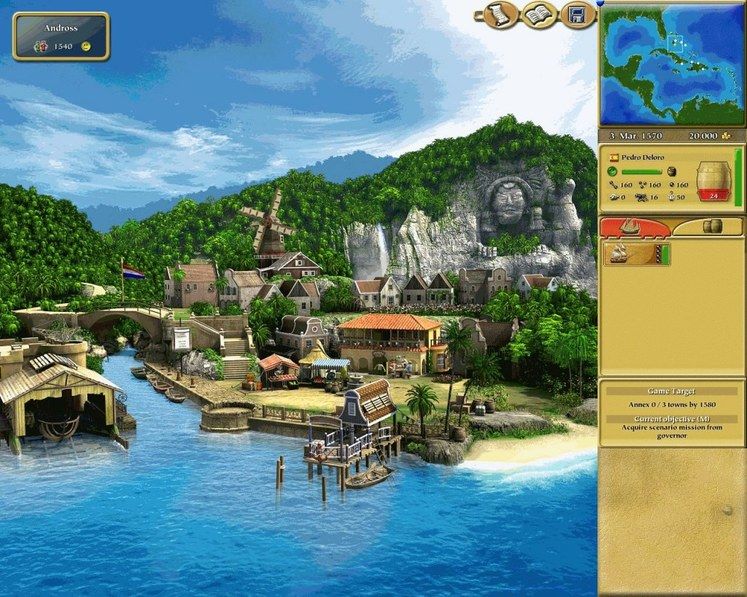 There was once a time when pirates and buccaneers sailed the Caribbean, preying on the Spanish treasure fleets and wealth of the new world for the glory and wealth of their nations. Powerful sailing ships manned by desperate men struck out in search of wealth and glory, and were renowned for their daring and ruthlessness. In Ascaron/Encore's latest offering, "Pirate Hunter," players can relive the golden age of piracy in the Caribbean as sailing men from the nations of the four great powers of the period, Spain, Britain, France or Holland. You begin your quest for greatness as a lowly sailor with a single ship, with instructions to see the governor to find out his bidding.

Pirate Hunter is built around missions that increase your wealth, glory, and fame in the world. The path to completion of your mission will vary depending on your game playing style, and the choices you make regarding relations with other nations. Each of the five scenarios opens with an overall objective for you to accomplish, this being the taking of a certain number of ports by a specified time. But you can't just sail to these ports and take them, you must first build your reputation, and only when a Governor of your nation asks you, can you take a port, and it must be the port he so orders. 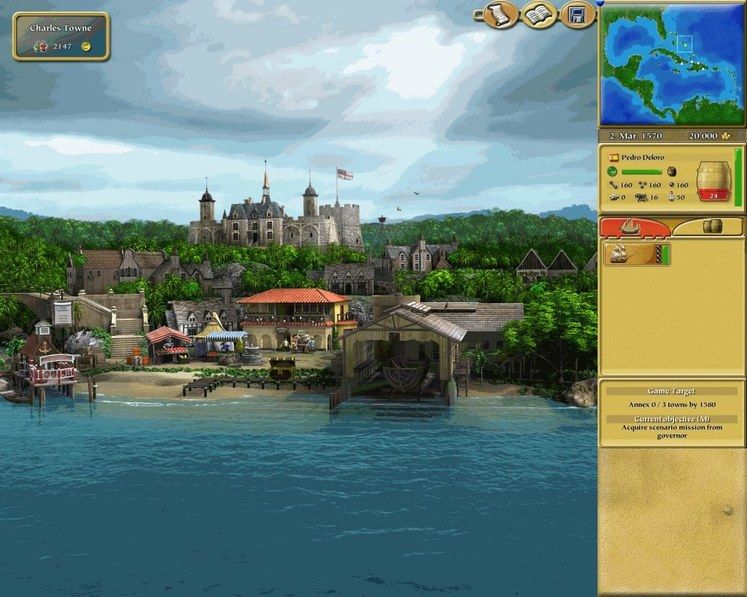 Your ship at start is usually a smaller fighting ship, good at maneuver and poor in gun power and usually low in total number of sailors. There are twelve types of ships, ranging in size from small ships to mighty ships of the line. Unlike many other naval games of this period, the smaller ships are nearly helpless against the larger warships, which are faster, better armed and have more crew. It is too your advantage to capture larger ships, and since you can usually take a ship slightly larger than your initial ship, you can work your way up, so to speak, through the ship classes. The ships, in size from small to large can be considered in four groups. The small maneuver group includes Pinnaces, Sloops, Brigs and Barques. You start most scenarios with a barque. The next group are transports that can carry many guns and men, but maneuver poorly, these include Flutes, Trade Flutes and Carracks. The next class are medium cruiser class ships, the Frigate, Military Frigate and Caravel. The final class, and you will usually need a few of these to take ports, include Galleons and Ships of the Line.

Sea combat in Pirate Hunter is easy to learn and difficult to master. Like the sailors of the period, you have a huge advantage with the weather gage, that is, sailing with the wind. You will encounter fleets of ships of between one and four ships in each battle encounter. You, however, can only use one ship in battle, so you will almost always be fighting two or more ships, and usually they are larger than you. You have a choice of three types of ammunition, which is depleted with usage and can be purchased in ports, these being standard round shot, which your guns are always loaded with, Chain shot and Grape shot. Round shot reduces your enemy's hull, and kills his crew members. Chain knocks down his rigging and kills fewer crew, but ships without rigging are helpless, since your ship's guns can only fire broadsides, if you can't turn, your dead. The third type, Grape shot, reduces the number of enemy crew units, which make boarding more successful. You can only capture a ship by boarding, and to do this, you must sail next to the target, grapple it, and then your crew and it's crew will have a melee, and the larger crew will always win, so make sure you have more men then the target. While locked in melee however, other enemy ships can still fire on you, and you might find your ship wrecked or unable to defeat the remaining ships even after a successful melee. You can flee from any sea battle by sailing for the fixed boarder of the battle area, and then you will return to the strategic map, and you can intercept the same convoy over and over, reducing them so that your ship can overwhelm them. If you have several ships, you can use a fresh ship in each engagement, wear as your target will be unable to repair the damage and replace his losses, so it is possible to defeat larger fleets. After you capture an enemy ship by boarding, you have the option of sinking the ship, capturing it, or simply looting it and sending it on it's way. Captured ships can be sold as prizes at any port, or repaired can be added to your battle fleet. This is the only way to increase the number of ships you control. 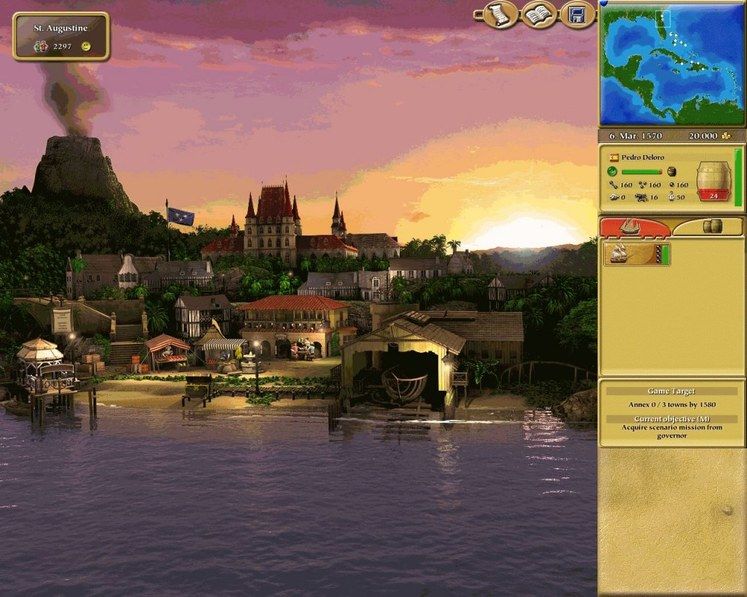 You will spend a lot of time in Pirate Hunter fighting such battles, and sometimes, the target of your attacks will be famous Pirates of the period. These are not consistent with the time period however, so Black Beard and Bartholemew Roberts can and will show up in the 16th century, but this doesn't hurt game play. In each port a sign post lists Pirates whom are wanted, and the money you can receive for defeating them and bringing them to a governor. The strategic map shows the entire Caribbean, Gulf of Mexico and Spanish main, and all ports can be found by running the curser over in game maps. However, the ownership and status of ports is mostly unknown till you visit each port.

Besides port capture and pirate hunting, you may receive other missions from the governor, or people may ask you to perform tasks for them. Such tasks include taking medicine to a distant port in a specified time, transporting a person in a given time period, and so forth. The Governor may ask you to take supplies of rum to a friendly port, and you will have to find a port to buy the rum, and then take it to the selected port in within the time limit. Different ports have different things for sale, and some ports are struggling and have few goods for sale, while others have many items to sell. You can make money trading goods this way, but watch out, you have a crew moral scale, and the more you sail about the seas, the more unhappy the lot becomes, to the point they may rebel and steal gold, ships, and they may even set you adrift! Other in game things to do include finding treasure, shipwrecked sailors, and the governor may ask you to find items he lost, and defeat his personal enemies. Another kind of mission is recon, the governor may ask you to sail to a list of enemy ports, where you must make landfall, and then sail back and report your findings to a friendly governor. 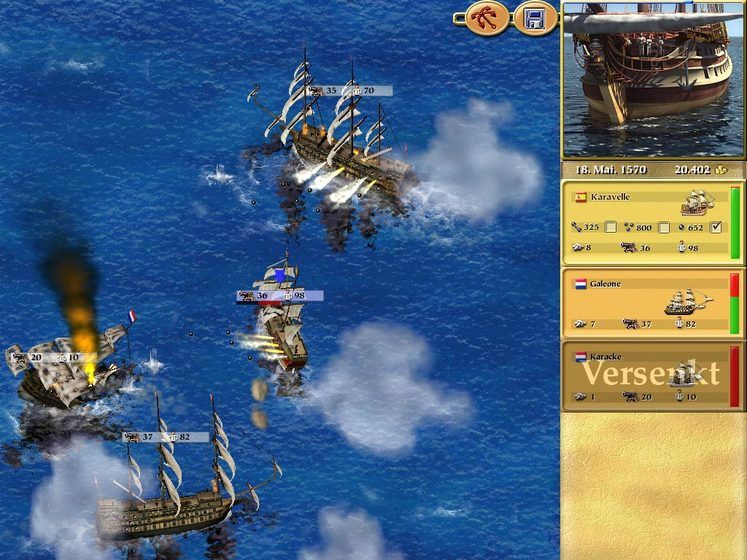 The access to ports depends upon your reputation. All nations are indifferent to you at start, and if you only hunt pirates, you will be welcome at any port of any nation, whether they are at war or not. You can perform missions for any nation's governors, and not all ports have governors. As you complete missions, a running tally is kept of your success and failures, and if your impressive, a friendly governor may offer you the hand of his daughter in marriage. This will add another source of information for you, as she will gather information of enemy movement, port status, and other rumors that may prove useful. In all ports, if your so inclined, you can also spend time gambling.

The ultimate goal is to seize enemy ports. To accomplish this, when your ordered, you sail to the port, and you must engage it's cannons and destroy all gun positions without getting sunk. This isn't to difficult if you have a large fleet, as you can sail off the map and get a fresh ship if your current one is heavily damaged, and continue the fight until you win. All damaged ships can be repaired in any port if you have the funds, but you can't repair ships in ports when your a hunted man, as the enemy is looking for your blood. 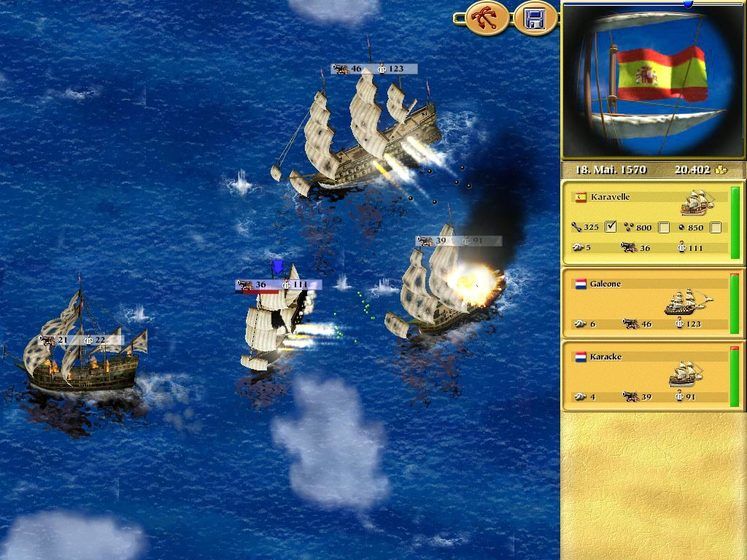 The graphics of this game are excellent, your ships in battle move easily, and the combat is vibrant and deadly. All the ports include excellent visuals, and the people and governors are animated when you speak with them. The strategic map is colorful and accurate, and shows the prevailing wind conditions quite well. Also, the AI in this game is very aggressive, and if your weak and have damaged ships, pirates and enemies will swarm after you, stealing your ships and eventually setting you adrift. The control interface is simplicity itself, and you can be playing this game within 15 minutes of loading the CD, yet it has endless hours of excellent game play that will keep you interested for many fights.

Overall, this is an outstanding effort from Ascaron/Encore, and if you love a good little game that plays well and is fun, get Pirate Hunter as soon as you can. Older game players may recognize parts of the classic Sid Meier’s “Pirates” of some 15 years ago, but updated and refined using state of the art visuals and smooth game play. I highly recommend this game. 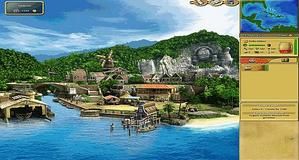