I don’t know about you, but I long ago lost track of the number of times I’ve asked myself, 'When on earth will we finally get a decent post office management simulation game on PC?' Wait a minute, no I didn’t. In fact, I’ve never wondered such a thing or anything vaguely similar to it and most probably neither has almost anyone else. Apart from, evidently, the think tanks at Excalibur Publishing.

You know you’re on to a real classic when your first thoughts about a game are that it seems like a piece of educational software from the early 90s; something which has tried to ape the appearance of a popular city building videogame in order to bolster its appeal to disinterested adolescents. In this way, such a game would hope to provide a somewhat engaging experience, all the while stealth-teaching to unsuspecting youths the inner workings of mail delivery services. If this bizarre fantasy of mine were half-true, it would probably double or triple Post Master in my current estimations; you have to give a bit of credit to educational software because it’s genuinely a tough job making something fun to play that actually teaches something worthwhile on the school sylabus. As it happens, Post Master is not such a thing at all. It’s a PC management simulator game released in 2014. That’s right, not iOS or mobile, but PC.


It looks like a slightly reworked version of SimCity 2000; a game which was released in 1994; 20 years ago. In other words, it's a top-down isometric view of a group of cities. The core gameplay consists in buying vehicles and setting the buildings you want those vehicles to visit. That’s it; is your mind blown yet? Of course, the idea is expanded in superficial ways. You can buy new central offices, improve them aesthetically, unlock new vehicles, build post boxes to collect mail from, advertise, and so on. However, none of this stuff adds anything new for the player to be concerned with. It’s a combination of pure fluff and mirroring of a base game mechanic, vehicle purchasing and path-setting, which is utterly uninteresting and quickly becomes horrendously repetitive.

By appearances it would seem as if the game features three speed options which allow the player to quickly fast forward through the dull moments, as if we were to forget for a second that there’s no other kind of moment to be found here. As it turns out, even the fastest game speed is a painful grind. Now bear in mind that you start the game with an amount of money which is almost 50 times what you can make in a gaming day to begin with, then consider that an in-game day takes about 4 minutes to process on the fastest speed setting. Finally, as they say on the other side of the pond, do the math. If this is supposed to be a realistic caution to any budding entrepreneurs that the postal service may not be the get-rich-quick investment they’ve been looking for then the point has certainly not been lost on me.

As you can see for yourself, the graphics are rather uninspired to say the least. There’s no ability to turn for other view points. This is not a 3D world with a 2D style, it’s a fixed isometric map with three levels of zoom and some of the worst looking trees I’ve ever seen in a videogame. There’s no mini-map either by the way. If you want to go somewhere on the city overview you better get dragging that mouse because you have to get there the old-fashioned way; by which I must mean, in an age before brains were invented.

Most of the time you, as the player, are left doing almost nothing but sitting and waiting for your income to slowly trickle in. The in-game analytics, if you can call them that, are more lifeless than real corporate finance charts. In addition, the useful ones which you might actually want to see, such as exactly how much profit and loss each individual mail delivery vehicle is making, are nowhere to be found. Vehicles themselves require almost no micromanagement. Once you’ve bought them, set their task, and hit go, they do their thing and you wait. If you want, later down the line you can sell them and replace them with something bigger which can carry more letters or parcels, but there really is nothing more to it and I already feel like I'm making the game sound better than it actually is.

All this sitting on your hands is made all the worse by the fact that you can't even just let the game run on its own for a few hours and come back to it later because at every new day the game pauses at midnight and waits for you to click a popup which says, ‘Jump to the beginning of the day.’ You might expect this to mean that you can fast-forward to 9am, which is when your vehicles start working and you actually start making money. But actually it’s anybody’s guess what this message is supposed to mean because when you click OK nothing else happens except that the game unpauses and you have another 9 in-game hours of nothing to wait through until your trucks leave the depot. Not that it's at all interesting to watch your trucks buzzing about the city, but it's something at least.

Even if you could skip through the game quicker the question remains, why would you even want to? To gradually become the richest mail business owner there ever was? There’s no campaign mode, the supposed missions in the game are nothing more than achievements of accumulation like ‘purchase three new vehicles’, the AI is almost unnoticeable and completely without personality, and the aformentioned gameplay is so shallow that it has very little appeal as a challenge for challenge’s sake. Despite the occasional cheap gags, I’m not saying it’s not possible to make a good game based on the idea of running a postal service, as it happens I love good tycoon games to death. But, please, this is a game which has so little depth I feel it’s genuinely an insult to my intelligence.

If there’s one good thing I can say about Post Master it’s that it actually works. It’s not buggy, it doesn’t crash, and there is actually a game, of sorts, there to be played. I suppose the music's alright too. But all in all, it’s a sorry excuse for a game. In a world in which we’ve been able to get a game like OpenTTD for free since 2004, the bar for tycoon games has to be higher than this; astronomically higher. This game is terrible. It’s a horrible excuse for a management sim which doesn’t deserve attention from anyone, and don’t think that it’s so bad it’ll be fun to play, because it won’t. Read this next bit slowly and carefully; avoid this game like the plague.

If there’s one good thing I can say about Post Master it’s that it actually works. It’s not buggy, it doesn’t crash, and there is actually a game, of sorts, there to be played. I suppose the music’s alright too. But all in all, it’s a sorry excuse for a game. In a world in which we’ve been able to get a game like OpenTTD for free since 2004, the bar for tycoon games has to be higher than this; astronomically higher. This game is terrible. It’s a horrible excuse for a management sim which doesn’t deserve attention from anyone, and don’t think that it’s so bad it’ll be fun to play, because it won’t. Read this next bit slowly and carefully; avoid this game like the plague.

The menu screen, a moment when whatever you imagine happens after you click New Game is probably better than what actually does. 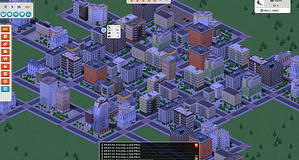