A beautiful and in-depth racing simulator. Shame about the name though eh?

Project CARS has to be THE worst name for anything, since… well ever. As far as consumable media goes, video games have some pretty crappy names, Demon’s Souls and Medal of Honor: Warfighter for example, but Project CARS has to be the worst of the bunch. It is such a flaccid moniker that does nothing to stir the hype muscles whatsover. Luckily for all involved Project CARS is bloody brilliant, both in terms of its adrenaline pumping gameplay and its eye gouging beautiful graphics.

A beautiful and in-depth racing simulator. Shame about the name though eh?

Naturally, weather will play a major part in your racing experience; rain, fog and high temperatures will affect your car and the track in different ways and the weather will change during the course of a race dynamically changing the event entirely, not only on a gameplay level but as a spectacle. The glaring sun will obscure your vision, and the merciless lashing of rain hampers your car’s performance and treats you to an impressive array of lighting effects and reflections. The already impressive car models look particularly great in the rain.

Enough about the fluff, the meat of the game is the cut and thrust of racing. There is an extensive career mode, a fully user defined free race weekend and customisable online lobbies each with a wide variety of options. Unfortunately, pre-release the online servers were completely dead so I was unable to assess the stability and quality of the online components of Project CARS. 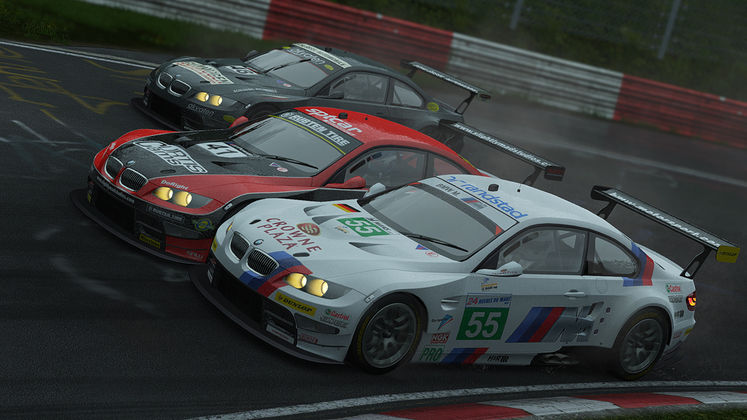 The career mode is massive, you can choose to start your career in one of several racing disciplines across 8 tiers of competitive racing. You’ll be taking control of many of the eighty plus vehicles available ranging from karts, to F1 cars and my personal favourite Grand Touring Cars. You will do battle across over one hundred tracks, many of which are licensed including Silverstone, Donington and even American highways.

Throughout your career you’ll receive messages from your team, invitations to one off competitions and contract offers for your services at the end of the season. There’s even a social media feed giving you fan reactions to your exploits. Ultimately though, this is paper thin and feels entirely tacked on. These characters you are introduced to never develop and the messages become repetitive after three races resulting in you never feeling a part of a team. There’s no illusion of camaraderie there and conversely no feeling of rivalry with the faceless AI drivers you compete against.

Annoyingly there is little to no information included with the contract offers, meaning that you have no way of knowing what discipline or vehicle class you’ll be signing up for or how long the championship will be or even what format it is. It’s disappointing that despite the amount of tracks and cars available, so little apparent thought has gone in to how the player can obtain information about the competition they’re about to sign up for.

There is an impressive amount of gameplay and realism options available. The AI, which can be a dick at times, can be altered before each race and you can implement differing levels of damage, tyre wear, fuel consumption and also add graphical and gameply aids such as turn indicators, braking assist and steering assist. One warning though if you intend on using the steering assist, it will not let you drive into the pit lane without a serious fight, you’re better off learning to get to grips with the game without it as it can shaft you completely on races with mandatory pit stops. Irritatingly, there is no way of accessing these menus during a race, so if you want to fine tune the gameplay and UI options to find that perfect fit for you, you’ll have to restart several times which is not only inconvenient but strange given that player choice seems to be one of the pillars that Project CARS was built upon. 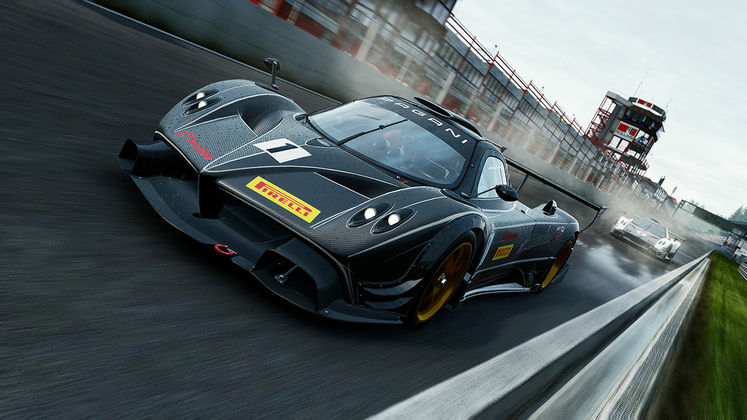 Aside from racing there are exhaustive options in the My Garage section. You can create various set ups for each car depending on the track and weather and there is as much depth here as you want, you can ignore it or plunge headlong in if you can actually make heads or tails of it. Another failing of Project CARS is that there needed to be a tutorial of some sort to help those of us who are unfamiliar with the inner workings of automobile engineering, and the fact that there isn’t even a test track to test out your set ups before you race is just baffling.

But enough of the niggles, the beating heart of Project CARS is how good it feels to fly around a track in the dozens of cars available. Slightly Mad Studios have crafted a game that you can race what you want, where you want and how you want. Even if what you want to do is race karts around the California coast in a thunderstorm.

Bearing in mind that it was impossible for me to assess the quality and stability of the online components of the game, but it was still clear to see that Project CARS is a bloody good racing simulator. Those of you looking for more of an arcade racer may be better off looking elsewhere, especially at launch price, but if you’re looking for a beautiful and in depth racing experience then shelling out £40 on Project CARS will be money well spent.

Discovering that I could go karting across the California coast in a thunderstorm!