It's difficult being a fanatical football fan sometimes. The inevitable hype and then early exit of your national team is disappointing, not to mention a Wembley thrashing that knocks your club team out of the playoff final, and hell, simply witnessing Wayne Rooney's face or John Terry's ego with any degree of frequency should require a licence for mental fortitude. But you know what's worse? Being a fanatical football videogame fan. It's what lead me to play delights such as Ronaldo V-Football, Fifa Street, and Chris Kamara's Street Soccer in an obsessive never-ending search for something, anything, they did better than the others, and to repeatedly experience that hollow feeling when you realise you just sank ten hours of your life into something almost completely without merit. That's an analogy that stretches to lower-league fandom quite nicely of course, and in some perverse mirroring of real life, terrible football videogames are strangely comforting to me now. And good lord, do I ever feel relaxed at the moment.

At its core, Pure Football is a 5-a-side arcade kickabout with simplistic passing, shooting and all the stylistic graphical finesse one would expect from a Mario Strikers or a Red Card. You don't just score goals on Ubi's courts, you score the type of bending, untouchable efforts that would make Ronaldo soil his sheets and Messi mainline those growth hormones for breakfast. Crafting an uber-goal is as simple as finding a player in space, timing your shot to hit the green zone in the power meter, and making sure you've aimed to a side of the 'keeper with daylight. What's more, you can do the same thing whether the ball is in the air or on the ground, so spectacular volleys and overhead kicks are accessible to even the most inappropriately gifted players.


And it's not all for show either. Pure's career mode puts the emphasis on the unreal with a series of bitesize challenges that task you not only with winning an encounter, but doing it in style. Score with every member of your team to unlock Miroslav Klose, concede less than four shots on goal to win the opportunity to play with John Terry, that sort of thing. As you make your way around a fictional series of tournaments taking on the worlds finest (and France), the idea is to unlock the players you want and form your own personal dream team with which to compete in the final stages or take online. Online matchups between two successful career-built squads are probably the most entertaining of the lot, although the network code leaves a fair amount to be desired, with sessions frequently descending into the sort of lag festivals associated with the previous decade.

So the structure isn't too much of a problem then. As sparse as it is, the career mode shows an appreciation that arcade football should be broken into short and sharp chunks that people can delve into with a few moments to spare, and the threadbare customisation and create-a-player options at least attempt to tie your team to a sense of personal progression. It's everything else that ultimately fails.

To begin with, the employed art style can only be described as 'bold' on the most sympathetic terms. Standing on the same turf as FIFA Street's stylised cartoon approximations, Pure's players have seemingly grazed on a diet of beef and granite for most of their lives (before rubbing their faces in both, repeatedly), exhibiting a sort of unnatractive square-shouldered, pot-bellied gait with stilted and repetitious animation bringing out their worst side. The arenas in which they ply their trade are naturally a little more colourful and exotic, but also completely devoid of any supporters or even piped crowd noise (vuvuzela's are suddenly rendered appealing), and sparsely animated beyond the sideline. That lonely focus, combined with a continuous faux action-movie music loop that becomes stale after a single listen, creates an atmosphere that is at best unattractive and at worst downright annoying.


Had the on-pitch action been anything to write home about then such misgivings could easily have been nullified, but unfortunately almost every facet of the gameplay is a misfire in some respect. Basic movement is sluggish with even the most responsive of players, with a good half-second of lag between input and eventual action. That factor is magnified when starting out with lower-tier squad members, and it's a wonder if many players will make it through their first few career tournaments as they turn with the grace of a tanker before sliding the ball straight to the opposition for the 50th time. Passing is functional, shooting feels robotic and inorganic, and it's entirely possible to score from the same angles or with the same manoeuvre every time once you figure out the limitations of the goalkeeper animation.

The most telling problem though, is that even when playing with the very best squad of footballers that Pure can muster, it just isn’t engaging and fluid enough to be of interest for more than a couple of matches. The very best arcade games give you simplistic controls but create depth with subtle gameplay, encouraging skill development with practice on both human and AI opposition. Pure does neither of these things, and you’ll have picked up everything there is to know within a single session. There is a little joy to be found in local multiplayer and it might be worth a punt if you can find it cheap and have nothing better to do, but it’s a quick and half-hearted burn that’ll leave you wanting to cleanse your palate with something a little more engaging. For me, it’s back to Virtua Striker on the Dreamcast. Awful, but in a good way. 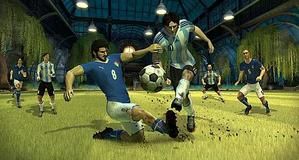