I know what you're thinking - "Oh noes, not ANOTHER World War 2 Strategy game!?" The industry's love affair with that particular time period will probably never go away, not soon anyway. There's just something about it, it's one of the last wars that doesn't involve modern warfare and that isn't a touchy subject for the Americans. If done well, it can also provide amazing and intense gameplay experiences. Provided it keeps getting (re)visited in new and interesting ways, we can forgive all who stray there. Although, I'm still waiting for a AAA studio title based around the first World War.

Anyway, enter R.U.S.E., a real-time WW2-based strategy game that centres on very much the strategic (as opposed to the tactical) nature of the conflict. The maps are wide and sweeping, and can encompass everything from the entire Normandy peninsular, to Italy and even the deserts of Tunisia. One of my personal bug-bears actually is that, more often than not, developers tend to forget that the Second World War did rage for a good four or five years BEFORE the invasion of Normandy, so it's nice to see places like Africa and Italy get some love as well.

Oddly enough, this game encompasses base-building as one of its core elements, which I personally thought the genre was beginning to move away from. Company of Heroes was really the last great base-building RTS (at least for WW2), and honestly we think the genre can go past that now. It's forgivable here though as bases are worked into the core strategy of the game - that of deception and out-stepping your opponent.

R.U.S.E. comprises of several modes, the first being single-player. You can't help but feel you've seen this movie already. The spy who you can see coming a mile off, the incompetent superior who's a pseudo-rival... there's even a token British guy. Engaging stories has never really been the Strategy genre's forte, so we're not really surprised. What is surprising though, and rather annoying is the way the single-player is a bit start-stop in the way it guides you through the game. Objectives are broken up, there's often in-game cutscenes explaining what you need to do ... for a game that's supposed to really challenge you mentally, the single-player campaign does seem to hold your hand a lot.

The core concept is of course the Ruses, which the game is named after. These are a list of special abilities that allow you to alter the conditions on the battlefield in subtle ways, and mainly revolve and espionage and subversion. You can hide all of your units in any given area, or switch their profiles around so that they appear more powerful than they already are. You can launch fake offensives, or build decoy bases, you can even inspire terror in your enemy, courage in your allies, or even just get them to move a little bit faster. They're simple tricks that make sense within the context of the game (most of them, anyway), but they require such thought and planning that they add a whole new dimension.

It's quite easy to forget they are there though, or just stick to a handful of the easier to use Ruses, as the strategy of the game can be pretty involving as it is anyway. We're actually reminded of Starcraft 2 at times, but only in a sense that you have to manage several things at once, and that a high click-per-minute ratio helps. The action is definitely faced paced when either taken online or on the harder difficulty settings. It's even possible to 'rush' in this game, either by sending ground troops steaming up the frontlines early, or spamming bombers or paratroopers to take the enemy from behind. Eugen however have always said that they believe these to be legitimate strategies, and so have not done anything to counter that. Just make sure you have a lot of AA with you.

R.U.S.E. is also a multi-platform title, which did raise some eye-brows when first announced - the strategy genre has never truly been at ease on the home console, mainly due to interface issues. Although you could also argue that the emerging 'COD' generation are the type of gamers who aren't that in interested in a genre whose roots go back to the early days of hardcore PC games as well. Never-the-less, Ubisoft have tried to bring the strategy genre into the console space in ways that make more sense. They came awfully close with EndWar, and they don't do that bad of a job in R.U.S.E.

The main innovation with R.U.S.E. on the console comes from its integration with the PlayStation Move. Sadly, we weren't able to test that out for review purposes, but from what little we saw during the preview stage, it goes some way to overcome the consoles shortcomings just as well as voice-control did for EndWar. We did however get extensive hands on time with the 360 version, and it's not as bad as you would think. Handy 'snap-to' features and some inherent game design points mean that the lack of accuracy isn't always missed, and button mapping is also very streamlined and easy to use. There were some issues with over-snapping and sensitive controls when navigating the menu, but we're not sure if that was the controller or not. It had been dropped a couple of times.

The key to any strategy game has to be its multi-player element however, and usually this equates to diverse game modes and options, but curiously enough, R.U.S.E.'s multiplayer component is a simple affair. Apart from choosing what technological era to fight in, how many teams you want, and a time limit, there's really not much else to it. This is off-set by the multitude of maps available, but the aspects that make the single player and skirmish mode so engaging carry over into multiplayer, and rather well at that. Tactics, subversion, misinformation... everything that gets you to use your higher functions in this game can now be pitted against another real flesh and blood opponent.

There are strategy games that push the envelope more than R.U.S.E. does, there’s no denying that, but Ubisoft’s latest offering is still an enjoyable game. We think ultimately there’s going to be less ‘subterfuge’ and out-manoeuvring then the developers hope for, given this titles pre-disposition towards blitzkrieg tactics, but there’s enough here to make it unique. If you can stand the time period, then this serves as a perfectly adequate medium between Hearts of Iron’s grand strategy, and Men of War’s more tactical focus.

Watching a plan come to together as your enemies cower before your might. 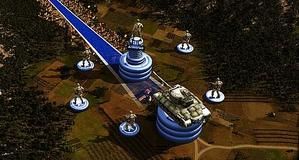