Just another manic Monday... over and over again

Ahhh Daedalic, a name that brings equal parts joy and terror into the life of this adventure game fan. For every wonderful Night of the Rabbit or Memoria there’s a, excruciating Deponia or Journey of a Roach. After the Deponia series showed that Daedalic had about as much grasp of comedy as I do of nuclear physics, with a hateful main character, ridiculous puzzles and the occasional bout of racism, sexism or paedophilia, I was in no hurry to play their next attempt. Fortunately Randal’s Monday is not only just published by them (it’s developed by Nexus Game Studios) but it’s also actually funny. Hooray.

After a Sunday of celebrating the engagement of his two best friends, Matt and Sally, general loser and kleptomaniac Randal picks up the ring Matt was going to give Sally and dropped while being sick in an alley. Upon waking up on Monday to find that Matt has committed suicide, Randal sells the ring for a lot of money… then discovers it had a curse placed upon it. He now has to relive that same Monday over and over again Groundhog Day-style, except that the consequences of Randal’s actions will carry over to the next day but everyone will remember it differently. Now living in a world where his best friend is dead, koala bears infest the streets and Trek Wars is the biggest sci-fi franchise in the world, Randal must find the ring, undo all the damage he’s done and make it to Tuesday alive. 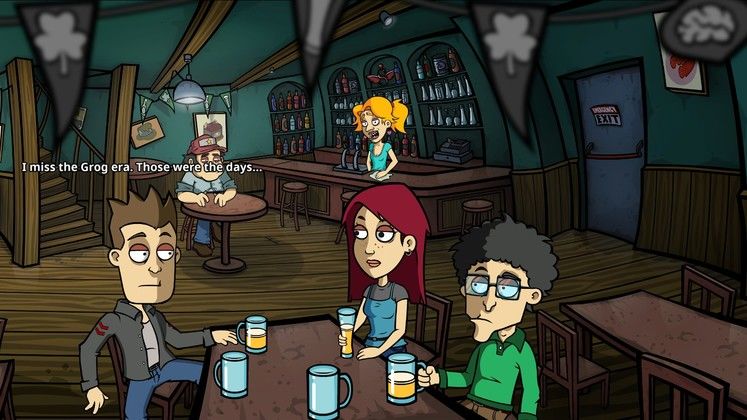 You and me both, buddy.

The thing that impressed me most about Randal’s Monday was the writing and voice acting, which is great news since that’s half the reason people play adventure games and something the Deponia series screwed the pooch on utterly. The story gets more intriguing as you go through, despite everything being so silly, and I love the time travel-style setup of being able to change things one day that affects the next cycle. The dialogue is genuinely funny and, as mentioned, is superbly acted with perfect comic timing. Playing Randal is Jeff Anderson (from Clerks, where he not coincidentally also played a character called Randal) and he does a particularly fantastic job. Randal is a loser and a bit of a dick but is genuinely likeable, simply because he doesn’t do anything with any malice or hate and seems unfazed by absolutely everything.

The one thing I didn’t really like about the writing side was the references. I don’t mind a poster featuring Max from Sam & Max showing up in a men’s washroom, a few nods to Futurama, or Randal’s alarm clock playing “I Got You Babe”, but in Randal’s Monday every other line is a movie/TV/game reference and every single background contains either several familiar items or straight-up copyrighted materials. It’s one thing having a parody poster for Bioshock, it’s another to just copy and paste movie posters or comic covers into a game. The constant referencing gets ridiculous really fast and stops being amusing or endearing even faster. Luckily the rest of the humour is funny, because the irrelevant movie quoting isn’t. And why would a psychiatrist have an office wallpaper of Maniac Mansion and the Quake symbol on his bookshelf?

While not exceptionally gorgeous the cartoony artwork is detailed and lovely even when crammed with screenshots from NES games, and keeps everything light-hearted and cheerful. It’s also got a nice Steve Purcell Sam & Max feeling of griminess and realism to it. The music never threatens to become LucasArts-level awesome but sets the mood nicely and keeps the laid-back atmosphere. And if we’re talking mechanics I’m relieved to see that Nexus have provided all the modern adventure gaming luxuries - pressing the Spacebar to highlight all interactive objects, two control methods (Classic and Modern), and an excellent hint system that will give you a full walkthrough if you need it. Well done Nexus, you’ve got adventure gaming right. 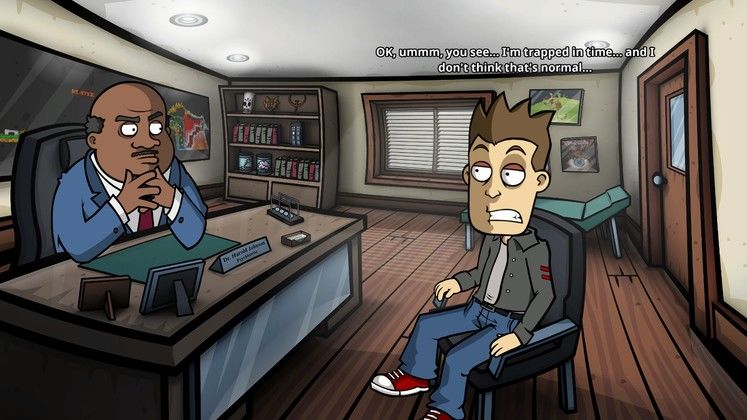 Seriously, why has a psychiatrist got Manny Calavera's skull, the amulet of Nur-Ab-Sal, and a Quake symbol on his shelf opposite a poster of The Neverhood??

Well… almost. You may have noticed that I’ve not mentioned the other half of the reason people play adventure games: the puzzles. Unfortunately, and it really upsets me to say this as for a good while I was all set to give Randal’s Monday a very high score, Nexus have screwed them up utterly. For the first two hours everything was fine and sensible and an 8+ score was looming, then everything went bats**t crazy. There is a fine, fine line in adventure games between “difficult” and “obtuse” and Randal’s Monday didn’t even realised that line existed. Far too many puzzles are illogical, reliant on you being clairvoyant, need you to visit a totally random location, or require too many steps to get items you don’t even know you needed. I’ll give a big example, but DON’T READ THE NEXT TWO PARAGRAPHS IF YOU DON’T WANT PUZZLE SPOILERS.

You need to peek in an accounts ledger in a Pawn Shop, so must distract the owner. A cuckoo clock with a cannon in it looks viable, but needs to shoot something. You head across town to a bar with a pool table, but you can’t take the cue ball because the player won’t let you. You have to buy him a drink and “spice it up” with three totally random items which I won’t go into how I got. If you haven’t done so steal a bowl of corn and matches from two separate locations, back to the Pawn Shop, use the matches on a gas cylinder (you can waste that apparently), “pop” the corn (can’t use it as ammo), poison it (with poison found elsewhere), go back to your apartment building, and kill some pigeons on the roof that you’ve never been to before with the poison popcorn because they’re guarding a beer bong (seriously). Use the beer bong on the cuckoo clock (because of course you’d know that), take a glass jug and fill it with water (from across town), return, put the filled jug on the still alight gas cylinder, it boils, plug in the other end of the beer bong, put the cue ball in the cuckoo clock, it explodes out (because boiling water is explosive?) and destroys a display that it wasn’t actually pointing at. All for a brief distraction. 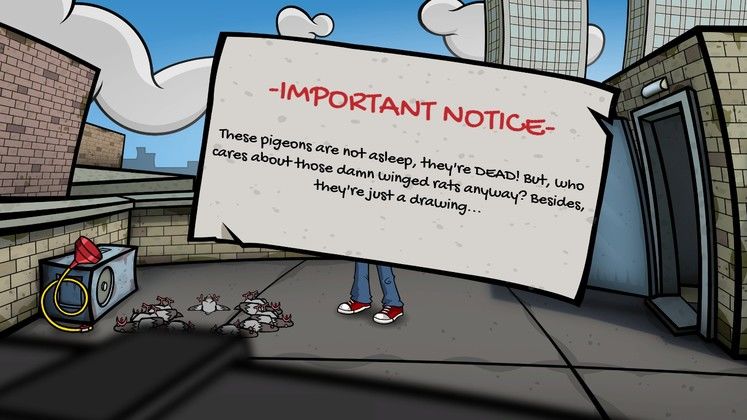 Now where have I heard that before...

I missed out a dozen different steps there and it’s staggering how much of that was impossible to work out without randomly trying everything in the environment. How about a background mug being filled with alcohol that repairs marker pens? Or choosing and consuming 12 drinks one at a time in order to sneeze in a woman’s face so you can tell her to use the men’s bathroom to put makeup on because she’ll leave her face powder in there and you need that to steal a comic book? Or spending ten minutes framing a guy with multiple personalities in order to get ahead of him at a psychiatrist’s then another ten doing an inescapable Rorschach test exclusively so you can swipe a free business card which is only used to jimmy the lock to your roommate’s room? Or spending ages trying random illogical ways to get a “diamond-like” icicle to cut a hole in a window when you have a hammer in your inventory?

To the layman most hardcore adventure games must seem like just random nonsense, but it’s actually a fine art. The objective needs to be obvious, the path can take you many places but you don’t just place loads of elaborate puzzles and actions in the way of getting an item you’re not even sure you need. Finally the payoff needs to be equal to the work you put in - if the goal is just “get a cup of coffee” or “look at a notepad” and it takes you half an hour to do these even when you’ve used the walkthrough it’s not fun, it’s frustrating. In Monkey Island 2 you may need to use a banana on the metronome to pick up the monkey to “monkey wrench” a water pipe, but that’s the entire puzzle and it gains you access to a whole new area! You don’t need another twenty puzzles just to pick up the banana, and another twenty for the metronome! Randal’s Monday frustrates time and time again. It quickly became a chore to play and deeply upset me how much I had to lean on the walkthrough.

Randal’s Monday gets so much right it’s depressing that it gets the crucial gameplay part wrong. The voice acting, story, dialogue, graphics, music, humour, modern adventure game mechanics, that’s all impressive and lovely. Then a couple of hours in it’s like Nexus Game Studios lost their book titled “How To Create Good Adventure Game Puzzles”. The puzzles are illogical, obtuse, require far too many steps to get even basic items, expect the player to just magically know that things will happen or objects will be somewhere, and often don’t have any sort of satisfying payoff. Quickly the joy of Randal’s Monday became a chore and all the good characterisation in the world couldn’t hide that. Plus the constant fourth-wall-breaking and unsubtle referencing got overbearing fast. You’re great at everything else Nexus, just get the gameplay right next time please? Your homework assignment: play all the LucasArts adventures again and take notes on puzzle construction. A+ for effort, F- for paying attention. 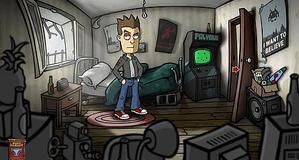