Magnet Gun. That's all you really need to know

Red Faction: Armageddon represents the fourth game in the Red Faction series, and it's interesting to see how far things have come. From first person, to third person. From destruction/manipulation of the environment to destruction/manipulation of objects and structures, from Parker to Mason. Now, we've gone from fighting for freedom from an oppressive earth government, to fighting for survival against a strange and ancient enemy.

When details of Armageddon first came out, especially regarding who the primary antagonists were, there were instant comparisons to the Dead Space franchise. This is understandable, and quite frankly we'd be surprised if Volition didn't see that coming, but it's honestly not as bad as you'd think. Apart from the first encounter with the aliens, Armageddon doesn't have any of that 'fear' factor that the Dead Space games thrive on, so apart from the obvious similarities you are getting two very different game.

But to quote a learned colleague of mine, "FUCKING MAGNET GUN". It's honestly ridiculous how much fun it can be to just fling bits of scenery at the enemy, and it's a testament to the technology behind the game that keeps the destructible environments from seeming tacky, or gimmicky. The NanoForge is really the key to this, as the ability to repair everything allows you to destroy everything, preventing that necessary evil of making mission critical objects strangely indestructible. Levels have the outer 'shell' which is unchangeable, but anything within that shell is free to be destroyed and regenerated at will.

Still, if it wasn't for the destruction engine, we suspect Armageddon would be little more than an alright third person shooter, as this game is a bit of a departure from the open-world nature of the previous game. The levels may be quite big and have several elements to them, but essentially you're playing through a linear game, fighting your way from A to B, and sometimes back to A again. Credit should go to the design of the game for keeping that fact more or less hidden (as sometimes it doesn't always feel like a linear game), but it's there, lurking in the background.

There is a sense that something is lacking from Armageddon though, but we're simply talking in terms of it being 'good' instead of being 'amazing' - this is in no way a bad game. As we've said, the single-player campaign is competent, and does keep you engaged for most of it. However it doesn peak a bit too soon, and it actually gets rather tedious towards the end. Once you've experienced all of the weapons at least, and found your 'perfect four', you sometimes settle into repetition. Once you complete it, you can go into a "new game plus" version of the game if you want to replay it, which allows you to keep your weapons and upgrades from before. Aside from the single-player, there's two other modes to get to grips with as well - Ruin, and Infestation.

Ruin Mode is a simple high-score set-up where you're presented with a map that's a snippet of one from the main game. Your objective is to cause as much damage as possible within 1 minute, using any of the explosive-type guns you want. There's a 'par' score for each of the handful of maps available, and you have to hit this score in order to progress to the next one. It's fun enough, and expertly taps into that hidden desire all gamers have to obtain the highest number possible, ever, for all time, but games like Bulletstorm handle the concept better. There aren't many maps, to start out with, for one thing, and finding the pattern is hard as not everything behaves in the exact same way each time. Luck can factor into a run through more often than not, which hardly makes for an enjoyable experience.

Infestation mode - this games equivalent to Hoard - by far has the most potential and is the only true multiplayer mode the game has. This is a co-operative mode where you can play with up to four people online, and essentially you have to survive against wave upon wave of aliens. There's 30 waves total, per map, but things get pretty insane as they are by the time you reach wave 7 or 8. On top of that, some maps are pure survival, whilst others have you actually defending a structure. Aside from the fun bits in the campaign, this mode has the highest fun-factor and can easily suck you in for more. It's challenging, hectic, and the differing modes help mix things up a bit.

As games go though, this is a surprisingly high-quality experience. You can tell a lot of effort has been put into the GeoMod technology, and making sure everything is as polished as it can be. This has to be one of the most technically sound releases we've played in a long while, and it's draw backs mainly come from the content itself, and not the design. With all the changes that have been made to the franchise recently however, it's hard to say how long term fans will react to this latest outing. Red Faction I and II still hold a special place in people's hearts, we understand, but we're long gone from those days. This isn't even that similar to Guerrilla, although not everyone liked that game.

What you really want to know though is - is it worth buying? We’d say yes. The campaign is a decent length, and there’s stuff in place to encourage re-plays. Ruin needs some work done to it, but Infestation has plenty to offer as well. In terms of value, this is actually pretty good, which is not something you can say for all games. How much you feel the content of the game is a bit lack-lustre really depends on your point of view but there is a solid, entertaining game here for newcomers and fans alike.

Causing an entire building to crash down on top of someone. Priceless. 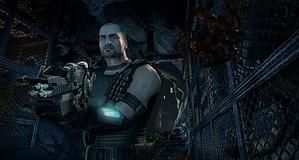