Grinding Greatness Out of the Random 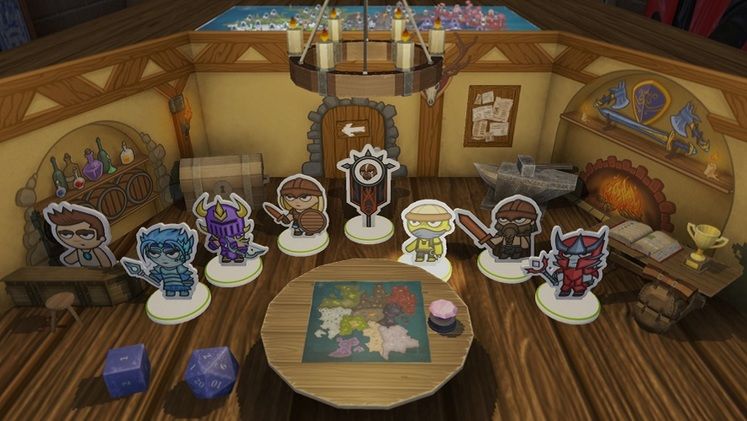 Anyone who has sat down to a full and quality session of Dungeons & Dragons can appreciate the nostalgia of taking up a character of your choosing and challenging a Dungeon Master that may or may not be sadistic on a Saturday afternoon. That kind of random adventure, scheming, and questing is the kind of feeling that Soaphog and Kasedo Games surely sought to capture with Rezrog. It’s got many of the fixings of such an event, right down to a certain charming tabletop aesthetic with game markers for players, monsters, and everything.

Rezrog does a lot of the little things well. It captures the romp for treasure, the diversity of character classes, and the thrill of survival in ever-changing dungeons featuring a wide array of threats. Unfortunately, Rezrog hits a few missteps trying to capture that feeling. The lonely grind through a dungeon, too often devoid of story and detail, is an unfortunately frequent reminder that your AI Dungeon Master does little to engage your imagination. 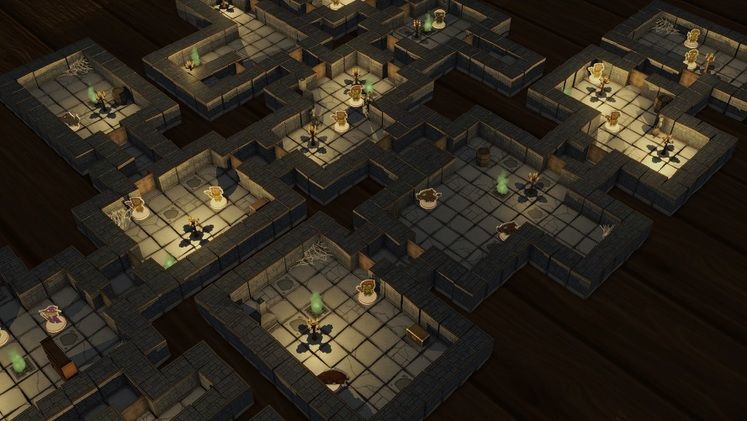 Rezrog starts off modestly enough. Seven characters of different classes are traveling the countryside of the titular Rezrog region when an ambush sees them fighting back to back. Following the skirmish, they join together at a nearby inn to revel and relax, but find it devoid of life. It’s as if everyone suddenly left. Looking to at least repay the inn keeper for the food, drink, and warmth they enjoyed, the impromptu party resolves to search the nearby dungeons, find the inn keeper, and solve the mystery of the inn. Immediately, Rezrog sets up a charming little story, but don’t get too used to it. It’s mostly just to set the context of the ensuing adventure.

You’ll start in the inn, picking one of your characters before each engagement. There’s a warrior, paladin, rogue, mage, warlock, summoner, and archer, each with their own strengths, weaknesses, and inventory to adventure with, outside of a shared inventory stash and eventual shop keep to trade with. You’re never committed to one party member if you don’t want to be and you can swap gear and items between them easily via the game’s relatively easy systems. Moreover, as you gain skills, you can level them up and power your characters further for the trials ahead. Rezrog offers a lot of variety in its characters and inventory systems and it’s fairly enjoyable to explore what you can do as each character grows. 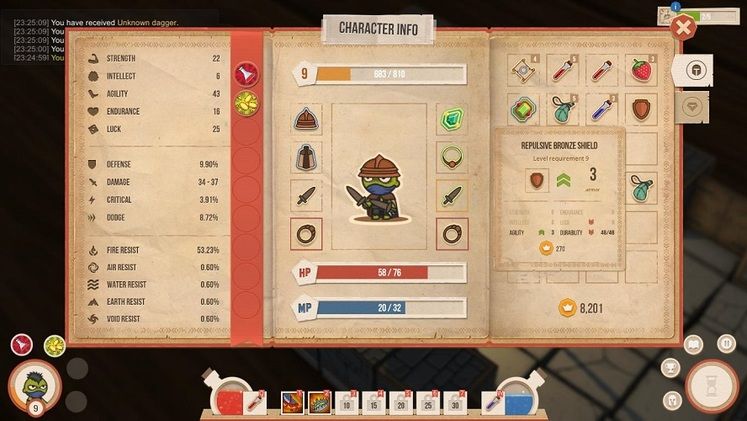 Once you’ve prepared your gear and skills and selected your character, you’re ready to go to the World Map and take on a challenge. The world map is full of various increasingly difficult regions containing an assortment of dungeons. In order to advance out of one region and into another, you select a dungeon, complete its challenge, and eventually come to a boss of the region that you must defeat to unlock the next.

Starting a dungeon has your character entering one room of the table-top inspired end of the game. A random event announces a buff for you or your enemies and you’re off to the races. The dungeons start simple, but each door you open drops down a building block assortment of room, décor, traps, lootable objects, and monsters. Every time you enter a dungeon, the layout, starting event, challenge to complete the dungeon, and routes through it are randomized. Sometimes, you’ll be killing enemies to gather weapon parts to assemble a sword and sometimes you’ll have to attack monster spawning crystals. Whatever the case, you must do complete the challenge to leave the dungeon and unlock the next dungeon. 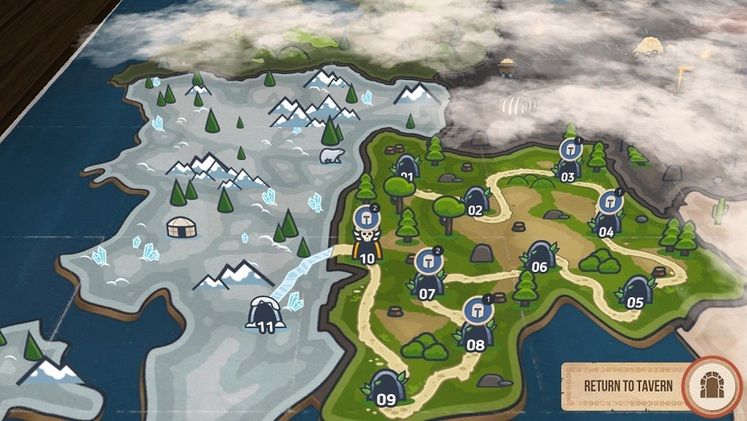 The randomness of Rezrog starts out pretty cheeky. A dungeon can let you off easy with a good amounts of loot, fairly easy enemies, an easy challenge, and a fast way to the exit. Other times, it can pummel you with difficult mobs of foes, sparse rewards, a tough challenge, and traps that you have to walk over to get to the goal. If your character dies, they get captured and your task for that dungeon then turns into a quest to save them with your other party members and escape the dungeon. The only way to really lose is to lose all of your heroes, which can come sooner than you might think if the shuffle of the dungeons doesn’t play in your favor. It can happen even sooner if game bugs come up. One annoying bug happened during combat and would render certain tiles impassable. Unfortunately, if that tile ends up at a crucial through point to a tunnel or objective, it can make the dungeon impossible to complete. Unfortunately, this happened enough to note and Rezrog is hard enough without level-breaking quirks that make you have to exit back to the map and try again.

Combat is an affair that plays out in rudimentary D&D fashion. Every move you make out of combat is a move enemies are allowed to make. That means you can strategize and reposition near them up until you engage. Once in, your character can move so many tiles and end their turn, attack, or use a skill or item. Then all enemies take a turn. It becomes a back and forth of syncing your skills properly, maximizing your damage, killing a single enemy before others join in, and running away from combat when you need to so you don’t get overwhelmed. Some enemies are easy, others will challenge or be a breeze for a certain class, and others can be downright unfair without proper planning, but with enough might and thinking around Rezrog’s systems, they all fall down. 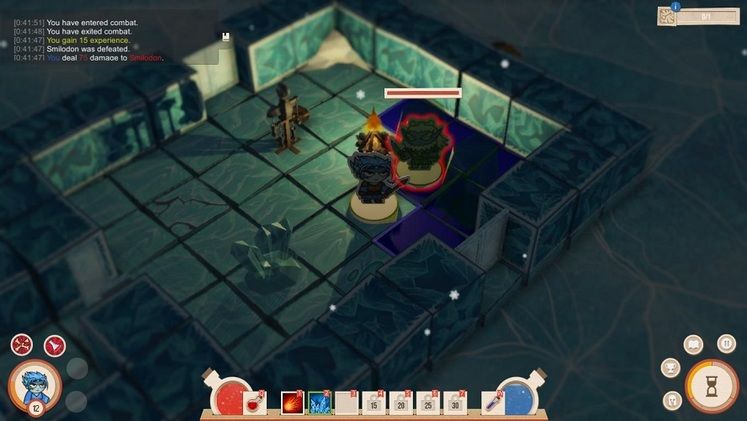 That brings us to an inevitable part of the game. The best way to overcome is to build your characters up by exploring early dungeons thoroughly and that’s where a bit of a grind comes in. If you want the best for your characters, you’ll need to search every room, open every chest, and kill every enemy to garner money and experience bonuses at the end of the level. At worst, this can be frustrating when the game thwarts you with a hard dungeon and leaves you constantly trying to save your companions. At best, it means you’ll be doing a lot of the same searching, scrapping, skill casting, rinse, and repeat, over and over again as you power your character up and find a strategy that works for any given monster. Though Rezrog changes its monster variety up at nearly every new dungeon, the long early game is a slog of repetition. Even on late region critters, it only takes a couple engagements and a modicum of consideration to figure out how to quickly dispatch foes in the fewest turns.

The sounds and music don’t really help the case in Rezrog. There are a number of short jingles that play as you’re in or out of combat and dungeons and a one hour trek through the game will introduce you to the all of the constant grunts, groans, and musical segments that mark a noticeably repetitive soundtrack. One would think as you pass through regions, you would get some change in the sounds and story, but we were only introduced to a new region with a brief, wordless, glimpse of a dungeon door in the region. Once inside, you’re treated to the exact same musical riffs and grunts that marked the last region, just with a different skin and some new monsters to kill. The lack of engaging story to go along with any of it punctuates a somewhat hollow roguelike that relies a little too much on randomness and grinding to the next level to overcome the repetition. 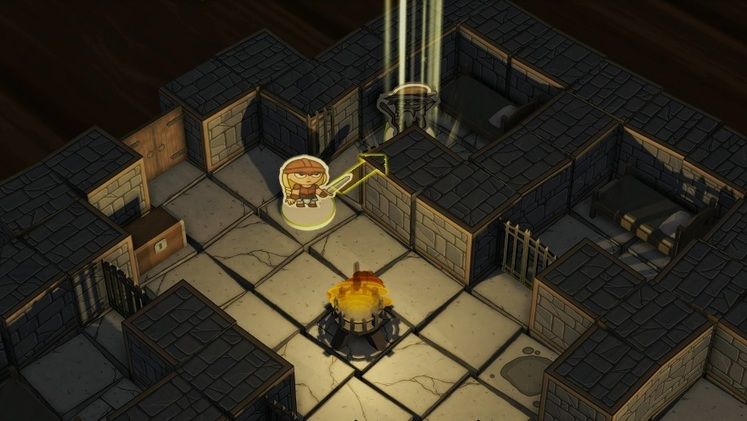 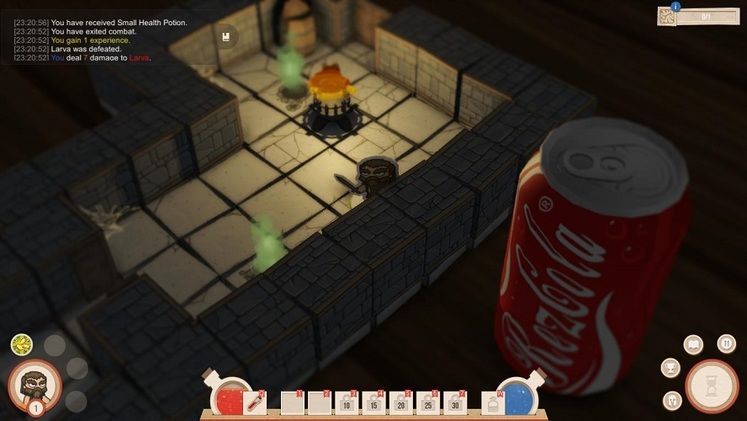 Rezrog really isn’t a game that should challenge many rigs. It’s got a modest and somewhat charming look about it. Character and monsters are represented by game markers, rooms are mostly a random assortment of tiles, traps, and objects, and spells are probably the most challenging graphical affair in the game. Rezrog doesn’t really go out of its way to be flashy with its aesthetic. Instead, it relies on the charm of the game board aesthetic, which both helps and hinders it at times. 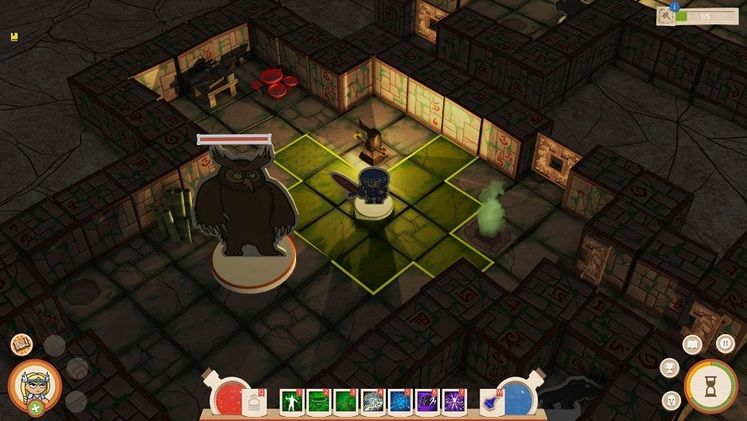 Rezrog has a lot of amusing things going on in it. Building up the characters and discovering their abilities is cool. For their sake alone, the grind is bearable, if only so you get to see them armed to the teeth and ready to overcome the variety of challenges that lie before you with their interesting and unique game styles. The roguelike array of dungeons presents a new and unique level each time and it can be enjoyable to figure out your strategy as Rezrog throws everything it has at you in any given scenario. Despite all tedium, running into new creatures and casting new spells for the first time are amusing little circumstances to come across in the game.

Unfortunately, Rezrog doesn’t change it up enough to keep the challenge increasingly interesting or constant. The music loops, the same tactics work over and over, the same threats are dispatched, and you either win or have your heart broken by narrow defeat or unlucky encounters. Rezrog could do for an infusion of story, variety, and life to keep things interesting. Instead, it feels like a Dungeon Master using the same tricks over and over again for long stretches of time before they come up with anything new or interesting to match the interesting starting context on which it kicks off.

Rezrog is a give and take of fairly enjoyable character building and somewhat tedious and repetitive dungeon crawling.

Building my mage up into a magic freight train of fireballs and ice walls paid off nicely when I wrecked a region boss with her.