It's totally a pirate game

Two years ago Risen 2: Dark Waters came out and I slated it. While I loved the fact that it was a pirate-themed fantasy RPG the whole experience was spoiled by drab environments, lack of actual piracy (like sailing), a boring and badly designed world, and combat so bad it made the whole game painful to play. Now developer Piranha Bytes is having another go with Risen 3: Titan Lords. Is the third time a charm? Read on!

Not long after the events of the last game, your unnamed hero and his sister Patty follow a treasure map to an ancient temple and encounter a Shadow Lord, a creature of the Underworld. You get your soul ripped out and sent to the Underworld, but a doctor versed in the arts of Voodoo Magic brings your body back to life. You have to get back your ship, your crew, and your soul, stop the Shadow Lords, seal the Crystal Portals that are now allowing their forces to pour out of the Underworld and ransack the world, and to top it all off the guy you killed in the last game is back as a ghost leading a fleet of ghost pirate ships. No pressure then.


First off, I want to address a misnomer. I don't know if Piranha Bytes, Deep Silver, or the general media is to blame, but the marketing for Risen 3 suggested that it wasn't a pirate game anymore and was back to being full medieval fantasy again. This is complete and utter bollocks. While there are a few more traditional fantasy creatures returning from Risen, like the fun Gnomes and Goblin sods, as well as the Mages and Demon Hunter factions, Risen 3 is totally and utterly a pirate fantasy game. You're dressed as a pirate (particularly if you get the pre-order bonus in which case you'll never change clothes), you hang around with pirates, you sail in a pirate ship, and you have a parrot. Hell, you're going after a dreaded Ghost Pirate with an attractive British-voiced girl by your side, can learn from a voodoo priestess, and you can hold a monkey in your pocket - it's not just piratey, it's f**king Monkey Island. Oh, and the subtitle should actually be "Shadow Lords" since the Titan Lords were defeated in the last one and have nothing to do with this story. Another lie.

I've checked - all the previews and news for the game clearly state that it's not a pirate RPG, which is like Activision saying the next Call of Duty doesn't involve guns. It's possible to avoid a lot of the pirate stuff, but frankly this is very good news to me for two reasons. First, we've got too many straight fantasy RPGs and there's no way Piranha Bytes can compete with Bioware, CD Projekt, Obsidian or even Larian, and the pirate thing helps them stand out. Second, all they had to do was make it more piratey (like adding sailing, ship battles, crew recruiting, that sort of thing) and just fun to play and then they'd be doing a really good idea justice at last. Well guess what - they have. It's still not perfect, but it'll do.

First off, combat. In Risen 2 it was balls. If I hadn't been reviewing it I would've given up in the first two hours because it was so painful. You could pathetically swing your sword and do a block that crucially only worked on sword attacks (not creatures) and that was it, and you had to spend a lot of Gold and XP/Glory in order to make the combat even remotely less tedious. Thankfully Piranha Bytes have listened, and while it still could be better it's at least playable. Right from the beginning you can charge a Power Attack, Blocking blocks everything but more powerful (and well indicated) attacks, double-tapping a direction dodge-rolls that way, and you always have a "dirty trick" handy which at the start is a pistol. While fights are still tricky and remain so over the game (even a basic enemy can always kill you if you're not careful or skilful) they are at least fair from the start, and once you've got a bit of practice in and start recognising when an attack's coming you're pretty much set for the entire game. The combat's never massively exciting, never quite smooth-flowing enough as it should be, and the auto-locking is terrible (my character once chose to hit a harmless duck instead of the massive undead horror charging at me) but unlike the previous game it at least never gets in the way of you playing it.


This is also partly due to you having the option of a companion with you at all times, offering at least a distraction in fights. While it's annoying that you can't have more than one and they frequently get stuck on the landscape, the game's much more fun with them there. Piranha Bytes has done a good job fleshing out the characters too and have taken a few pages from Bioware or Obsidian. Companions comment on areas being visited or talk to you regularly, they all have their own unique quest paths and stories, in fact Risen 3 eventually goes all Mass Effect when you suddenly find you have your own ship and crew and you talk to your friends between missions. Your character's pirate sister Patty (from the last game) was my companion of choice simply because of her anecdotes, although occasionally I went with Shakespeare-voiced voodoo doctor Bones for his comments and handy healing powers.

Risen 3 does continue with exactly the same odd character system as previous games, which deserves a bit of explanation especially as none is forthcoming in the game itself. First off, there is no character customisation whatsoever. What's the point of having a deliberately unnamed character if the player can't name them? And considering the game starts with a man and woman exploring a temple together I don't see why we couldn't play as Patty instead. As for upgrading, there is no "levelling up" like most RPGs. You gain Glory points by doing various actions which can then be spent at any time to upgrade various attributes, like Melee, Dexterity, Toughness, those kinds of things. These increase appropriate character traits like Intimidate or Swords, and these can be further boosted by buying lessons from Trainers scattered around the various islands along with getting brand new skills such as Potion Making or the incredibly useful Parry (which gets you an automatic attack on a perfect block). It all connects together well, and while there will undoubtedly be chests you can't Lockpick or conversation paths you can't choose because your skills are too low it gives you more drive to unlock them. At least with all the key combat skills unlocked at the start now I actually felt I was upgrading the areas I wanted rather than feeling forced to spend all my cash on a dodge roll.

The world is the most important part of course, which was one of the big downfalls of Risen 2 since it all felt drab. With massive relief I can say that this not the case here. The game takes place over several different islands of varying sizes, from fairly small to huge, which you can travel between at any time although you're at risk of being attacked. Yes, despite being told that Risen 3 wasn't piratey it's actually even more so because you can now sail your ship into battle against vessels and giant sea monsters, which are a fun interlude between islands. Not that the islands aren't brimming with personality. Unique castles, ruins, temples, jungles, and Shadow-ruined wastelands are there to explore, every corner has secrets to uncover, and thanks to the better map system and general design it's hard to get lost this time. Fast Travel has to be unlocked by finding unique Teleporter stones and attaching them to appropriate structures, which I don't really like as Fast Travel is supposed to make things easier (especially as you're never told what the Stones look like - large spherical gourd-like things incidentally) but the islands are still fine to just run across. Most importantly it's fun to explore the world as you'll always find things to keep you interested, and you'll have quests pouring out of your arse if you talk to every character and read every book - and they're very rarely the "collect 12 crisp packets" or "slay 20 rabbit-pelicans" type.


The one big shock: this is not a next-gen game. It's PC as usual (not that you'd know by looking on Amazon) but it's 360 and PS3 on consoles with no XB1 or PS4 versions. Ergo, it's blatantly not going to look much better than Risen 2 and nowhere near as good as Dragon Age: Inquisition let alone The Witcher 3. Nevertheless on PC it still looks pretty good, with interesting and believable design taking the place of actual graphics power, and at least people with less powerful computers should be able to run it easily and still have an attractive RPG. Nevertheless character animation remains pretty wooden, there are still only a few models for NPCs that continually get reused, and as for the redesign of Patty... well, she's a big-breasted pirate girl wearing a ridiculously revealing top whose special ability is "charming" men in bars. At least she's fun to be around and the voice acting is generally good, and compared to an RPG I'm reviewing later this week Risen 3 seems about as sexist as The Vagina Monologues so I'll let it slide.

Despite still having a few issues Risen 3: Titan Lords is a vast improvement on Risen 2. The combat could be better but doesn’t cripple the game this time, the world is more interesting and easier to get around, and there’s tons of stuff to do. The story’s a bit too straightforward with not many surprises, Fast Travel is a bit of a pain when it’s supposed to make things easier, a number of things could be explained better, character customisation is nil, and despite the islands being better designed we’re still dealing with a nicer-looking Xbox 360 game here. I can live with all that though, because while Risen 2 was physically painful for me to play (I had more fun with the Game of Thrones RPG, and that’s saying something) I really enjoyed Risen 3 and can heartily recommend it. It’s still totally a pirate RPG though despite the various marketing lies, but it’s also actually a good one this time. Hooray.

Meeting a little bastard called Mud who followed me around everywhere, stayed out of fights, and did nothing but criticise me. There was a big payoff at the end for not killing him, I can tell you. 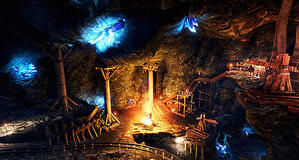