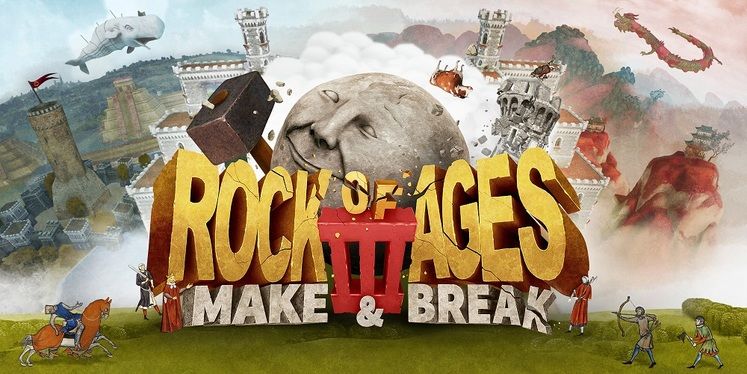 Rock of Ages 3 is the newest entry in a series of games that mixes comedy with one part destruction derby or obstacle course (depending on your style) and another part, tower defense. Yes, it’s just as strange and whacky as it sounds and it embraces the gameplay absurdity with Monty-Python-esque humor throughout, which makes for an all-together ridiculous and fun time.

Players take turns, whether they be human or AI, in an attempt to take out the other player’s door and subsequently cause as much havoc as possible. When you’re on the offense, you’ll be rolling down a large variety of different obstacle courses, taking out trees, buildings, people, and more on your way towards that door. When roles reverse, you’ll be setting the course with a variety of traps, obstacles, and more to make the opposing team’s journey more difficult and hopefully preventing them from an opportunity to build up enough momentum to cause you harm.

New to the third iteration is a map-building tool that the developers have said that they’ve even used in-house to build the maps that are already in-game. The tools are extensive and could easily provide the creator types out there with hours upon hours of content and creativity opportunities.

A combination of the humor and gameplay had me laughing out loud during my time with Rock of Ages 3. The absurdity of it all, mixed with the unexpected reactions to your best attempts to successfully navigate each challenge, left me smiling ear to ear often. It’s clear that the developers were laser-focused on making Rock of Ages, above all else, fun.

Though I wasn’t able to play it in multiplayer, I can imagine that facing off against friends here would be a great deal of fun, too. The potential for absolute shenanigans is high, as watching your friends attempt to steer their way through your gauntlet could prove disastrous. Even a “good” run will leave delicious and hysterical havoc in your wake.

It’s rare that a game elicits frequent chuckling from me, but Rock of Ages 3 did so more than I ever expected. I can’t wait to play with a buddy or two and see what happens.

An Avalanche of Options

Beyond the map editor, there is also plenty of game modes that can keep you occupied. Become a bomb in the time trial mode and make sure you complete the trial before your fuse gets burned up and you’ll do what bombs do and explode. The Avalanche mode is a bit like Rock of Ages 3 version of horde mode, as you’ll sharpen your tower-defense skills as waves of boulders attempt to crush your castle. Then there’s Skee Ball which has you finishing each course in fashion as you attempt to land those big scores with your best skee ball placement. Not to mention the Obstacle Course mode, where you’re dodging all sorts of set pieces, trebuchets, wheels o’ pain, and even cows as you race down to the finish line.

Each of these modes provides a twist or two on the normal gameplay and each one is fun in its own right.

Whether it was in an Aztez-like course, an Ancient Chinese gauntlet, or a Greek-like backdrop, I really enjoyed my time with Rock of Ages 3. Sure, the AI makes some silly mistakes and isn’t quite the challenge that I want it to be most of the time, but it didn’t take away from my ability to smile, laugh, and keep playing. The absurdity of all of it, mixed with the fun and inventive gameplay, left me with a perpetual smile on my face.

It’s a weird, weird game, but it’s all the better for it. If you’re interested in playing something unique, in a variety of distinctive settings, and with a diverse group of gameplay modes, then Rock of Ages 3 is something I can easily recommend. Even if the premise seems a bit over the top, it’s still a game that I’d easily advocate for as I’ve really enjoyed my time with it, despite being someone that’s not easily impressed with strange games like this normally.

Part racing game, part destruction derby, and even part tower defense, Rock of Ages 3 is all ridiculous fun. With a variety of gameplay modes and a map editor, there’s a lot of life to this game, too. Rock of Ages 3 is a game that focuses on just being plain ol’ fun and you know something? It really is.

Each time something went off the rails, both literally and figuratively. 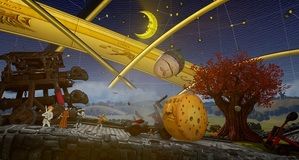