There's not too much to say about this title which even a moderately enthusiastic videogames consumer wouldn't assume for themselves just from reading a genre descriptor. Rush for Glory is a tower defence in the core and classic sense of the term. In other words, there's basically nothing here which hasn't been seen before. However, neither are there any glaring faults with what there is.

Wave after wave of enemy troops march down a fixed path and you have to build and upgrade a variety of defensive towers at the side of the path to try to destroy them before they reach the end. For all the troops who reach the end you lose health, in the form of 'population'. For all the troops you kill you get money, to spend on more towers and upgrade the ones you have. For upping the difficulty level you are awarded stars which you can use to unlock more upgrades for the different towers. You also have to repair your towers after they get attacked by certain enemies, a mechanic I've never particularly enjoyed in these types of games.


There's no making your own maze, and no heroes, although there are some fairly potent special abilities. The five which become available are the ability to quickly heal all your towers, a temporary freezing of all the enemies on the map, a type of land mind, a temporary attack boost for all towers, and a powerful concentrated airstrike. They all cost some gold, but compared to the cost of towers they are all very economical and are limited more by a cool down time.

The towers themselves are all more or less nothing which hasn't been seen before. There's the standard minigun tower which can attack everything, there's a tower which has a slow down effect when it hits enemies, there's a mortar tower which causes area of effect damage, there's a heavy machine gun tower which can only attack land units but has a very fast firing rate, and there's a ground-to-air attack tower used for taking out flying enemies. In addition, each tower has a special unique ability which triggers randomly and either increases damage, causes negative effects on enemies, or changes in some way the firing rate of the tower. Towers can only be upgraded after they have gained enough XP which is determined exactly by kill count, so it's not only gold which limits how much you can upgrade your defences.


The game has an unobtrusive rolling tutorial which quickly and simply explains how to play as you progress through the levels. It also features a wealth of useful hotkeys and important features such as the ability to change the game speed dynamically and to call in the next wave of enemies prematurely - something which earns you a little bonus cash too. The 3D game engine does its job and the in-game camera is fairly flexible in how you can change the angles and zoom in and out, in addition there's a cinematic camera which shows you a close up third person perspective from a tower of its current target. The enemy design and variety is also pretty cool, but that's a basic necessity for a decent tower defence game. Most things have been well put together and there really is nothing particularly lacking in this game other than a bit of innovation.

On the hardest difficulty setting the game is fairly hectic. At any one time most of your special abilities will be used and on cool down you'll be speeding over the map repairing, upgrading and building new towers. Although due to the relative simplicity of the game, after all there's not really that many towers to speak of, the challenge isn't very intellectually taxing. It's more of a test of reflexes, concentration, and hotkey usage. Personally, I'm not sure that's what I'd want to be my major focus for this kind of game. Tower placement and strategy really doesn't seem to come into it that much, you just do the obvious things like placing powerful towers at junctions, playing air only towers in the path of flying units where ground attack towers wouldn't be able to hit anything anyway, and so on.


In an already saturated genre the discerning gamer has to wonder how you separate the wheat from the chaff and should probably come to the conclusion that the only titles worth looking at are either those of exceptionally high quality, excellent value for money, or the ones which innovate in a novel and enjoyable way. I had a bit of fun with Rush for Glory, but I couldn't help continually wondering why exactly it should be chosen for purchase over anything else, and that was a quandary I think the game never provided me an answer for. The launch cost of the title is in the budget range, but it's at the higher end of it, and it does nothing particularly outstanding and certainly nothing new.

If you’re gagging for a tower defence game, then why not? It’s well balanced, it runs well, the graphics are alright, the level backdrops are interesting and well designed and it’s, well, a tower defence game. But there’s no special reason to go nuts for this one, maybe it’ll look a little more attractive when it drops under the $5 price point. 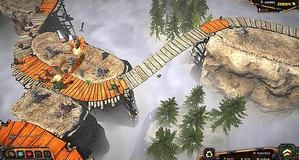