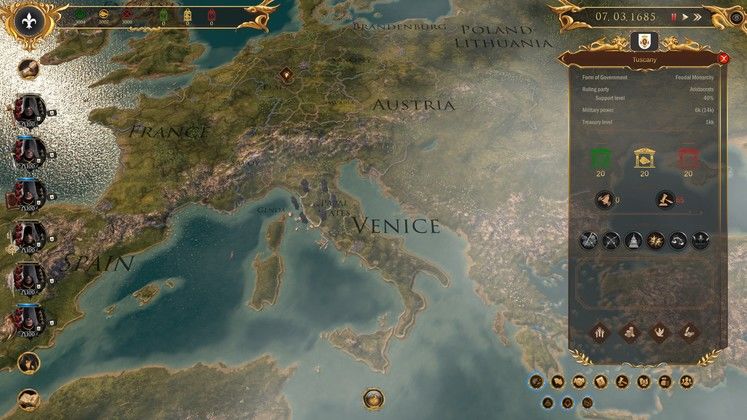 Grand strategy games are hard. Aside from the sheer scale and variables at play, there’s not that many time periods one can set them in; Ancient Times, Medieval Times, Renaissance, Age of Sailing, World Wars, sci-fi – aside from the modern contemporary world, it’s all been done and dusted several times over. Therefore, grand strategy titles need a unique angle rather than a year to stand apart from the crowd, and that’s exactly what Secret Government goes for: instead of controlling countries and empires, this game is all about controlling secret societies.

While a grand strategy, Secret Government is not really a 4X – instead of building units and facilities and guiding the course of a country/empire/civilization, you recruit members for a secret Illuminati-like society in order to influence the world from the shadows. By building lodges and infiltrating the governmental, economic, and military institutions of various countries throughout Europe, you get to slowly direct the course of humanity’s affairs. 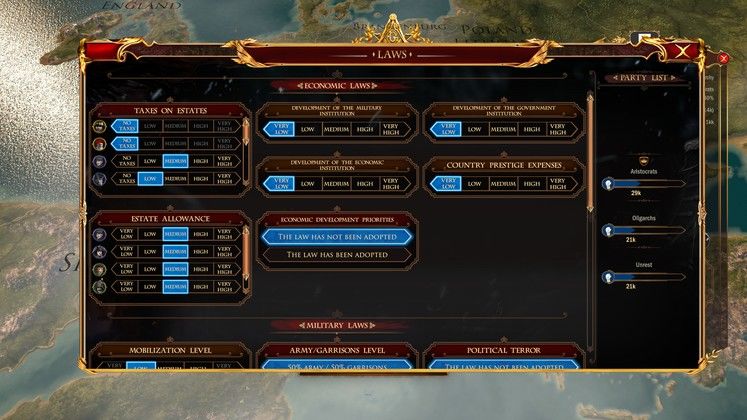 The game starts in the 1680s, as you start recruiting citizens of countries to rebuild the now fallen nameless Brotherhood and send them around Europe to infiltrate countries, recruit neophytes and acolytes, and build grand lodges around the continent in order to generate influence, money, and military support for the Order.

The actual gameplay involves sending one of six masters on errands, which include an astonishing number of options divided in over a dozen categories. You can recruit neophytes, cover the Brotherhood tracks, found lodges, fake attack/defense/move army orders, infiltrate governments, exploit treasuries and contacts, foment revolutions, spy on enemy societies, influence diplomatic and trade deals, and much, much more. 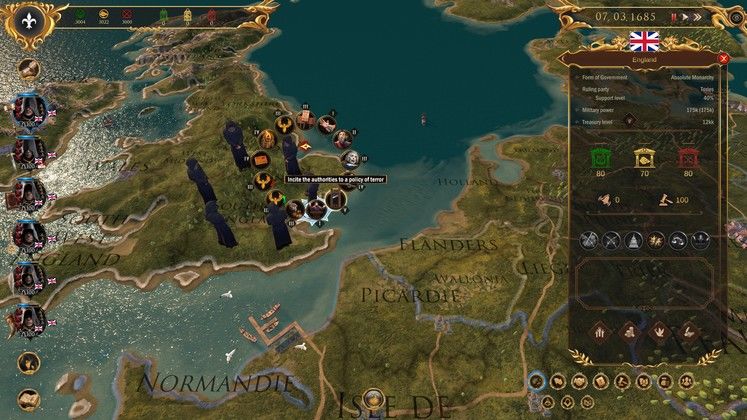 In order to do those things, you need to manage each Brother’s secrecy and the country’s awareness of the order, as well as use up resources acquired by infiltrating a country’s institutions. Each of the three institutions have three levels of infiltration for a total of nine, and once 3 infiltrations have occured in a single nation, a grand lodge can be established there. This grand lodge generates daily resources without need to do errands and without raising the country’s awareness of the Brotherhood, as well as making any undertakings in that region easier and cheaper.

While the game’s angle, complexity, and breadth of errands are all very interesting, the actual gameplay loop of Secret Government is exceedingly boring. While you can recruit a dozen neophytes and acolytes, you only actually control the 6 masters. In fact, after more than 15 hours with the game, I’m still not sure what’s the purpose of recruits besides replacing masters, as I can find no way to interact with any of the dozen of initiates I recruited over time. 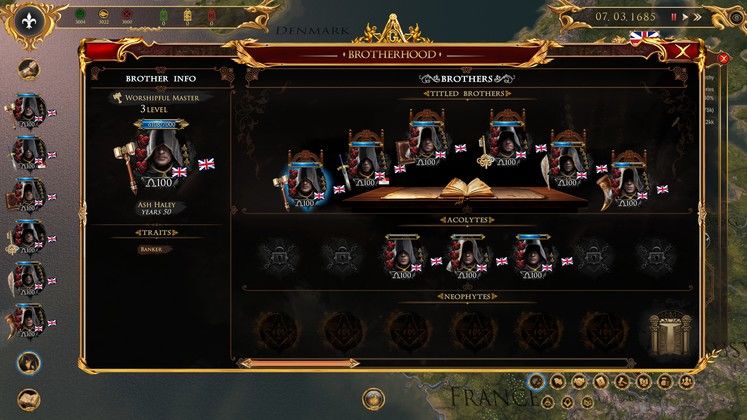 It also doesn’t help that funding lodges is mainly a number’s game and that the Brotherhood’s hierarchy is universal – instead of founding an initial master lodge followed by grand lodges in each country, each with their own unique members busy infiltrating each nation’s culture and furthering the order’s goals, you get a meaningless dozen people shared across the world, and three-quarters of them are useless – the game actually has you micromanaging 6 units instead of overseeing a big secret society.

That is extremely important both for immersion and balance – the game constantly throws number modifiers to actions, with things like foreign citizenship making it harder to infiltrate institutions or perform errands. That means you must recruit people of a certain country to infiltrate it, but since you only control 6 people at any given time, you are forced to constantly demote people to replace them with recruits in order to efficiently infiltrate new nations, which causes loss of loyalty (Something the game actually never explains how to increase). 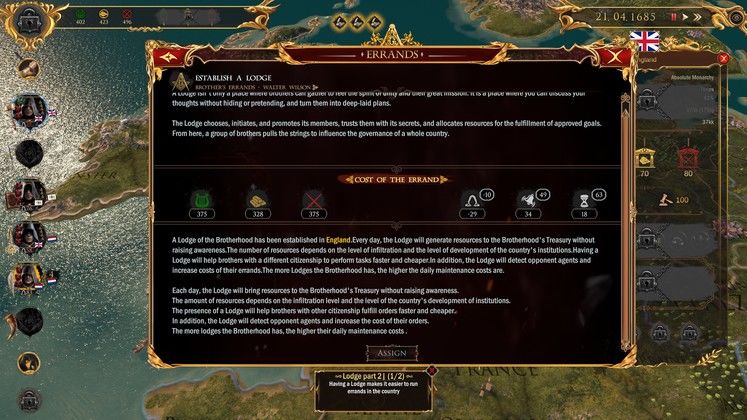 Besides that, the actual gameplay feels like it was made by an engineer. Money, influence, and military support are just numbers on the screen, highly abstract and without intrinsic meaning. Moving a brother between countries can cost as much as founding a grand lodge building in new territory – a ridiculous proposition given the tens of millions of pounds that acquiring a building in Paris and securing it would cost. Similarly, the game never explains why things like recruiting someone requires the expenditure of military support – basically, every single action has a random resource cost with no rationale behind it.

In the same way, the whole secrecy thing with Brothers is extremely aggravating. Every action takes days to complete and reduces your secrecy by varying degrees, and you usually recover a single point of secrecy out of a 100 every day/second. If a brother’s secrecy reaches 0 (or a random RNG event pops up), the character becomes exposed and its errand is cancelled without refunding ANY of the resources spent. Besides turning most of the game into a hands-off waiting where you give a single order and wait several seconds for it to complete followed by waiting more seconds for the secrecy to recharge, it is also an extremely boring concept whose only purpose is to limit what little player agency the game offers to begin with. 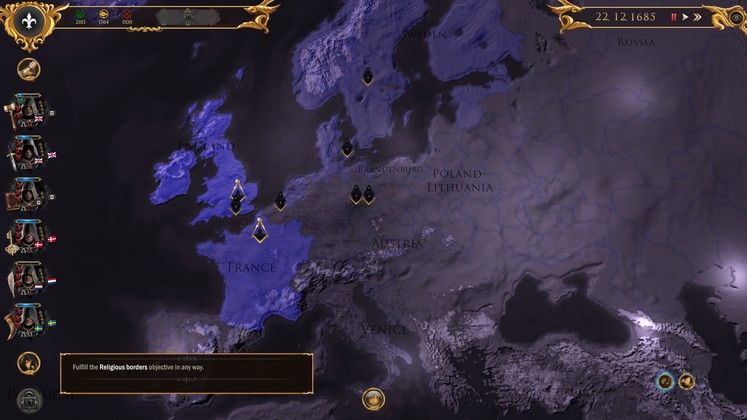 Another big issue is UI and readability – while graphics and sound are surprisingly competent, some parts of the UI could use a lot of work. The biggest one was the actual selection of agents – all six Brothers on the map wear matching cloaked hoodies, and their icons have just rank illustrations with no names or colour-coding. As a result, I had a decidedly harder time keeping track of each individual than it should be sensible. The game needs to add names under them on both the map and the UI portraits, as well as a colour coded ring at their base – I understand matching coloured robes are part of the setting, but the UI selection ring being confusing to the point of uselessness sure isn’t.

To be completely honest, Secret Government has good ideas and a lot of potential, but it could do with a complete overhaul of its gameplay mechanics in a similar way Paradox’ Imperator went through last year. That game was also plagued by meaningless number porn that ruined player actions and presented very few actually fun gameplay choices, and Secret Government is no different. Member hierarchy needs to be at the crux of the gameplay, with the masters being figureheads that rarely travel, with a more granular roster of characters capable of working in countries, performing errands, and travelling around to fulfill the needs of the order – the same way secret societies have been said to operate historically. In the same manner, the resource numbers need to mean something, and have a better way of being acquired than “send a Master to exploit the government for 15 days” – it needs to be an investment mechanic similarly to the underlying lodge and infiltration system, where the most you spend, the more you solidify your underground network of power.

As it stands, Secret Government is an interesting concept let down by a very boring gameplay loop. As a fan of grand strategy games, I look forward to seeing what is done with the secret society concept as the game develops in Early Access. If the game stays as it is or the flaws pinpointed here are not addressed, however, I can’t honestly recommend it to anyone.

An interesting concept let down by an exceedingly boring gameplay loop

Stopping a war between France and its neighbours through careful manoeuvring and infiltration. 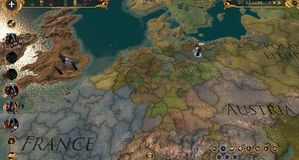 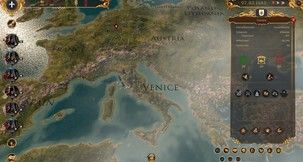