Innovative sidescroller Sideway: New York makes its way onto PSN with a bunch of tricks up its sleeve

The Playstation Network has fast become a hive of innovation, with games like Flower and Journey breaking free of the 'indie' label many downloadable titles can suffer from. Experiences that would never make it onto a retail disc, whether that's because they are too short, or too risky, PSN is an exciting market. Sideway: New York falls into the first category, with just a few hours of gameplay required to complete. This is no bad thing, as while the game may lack longevity, this is a game that's unlike anything you've ever played.

When you boot up Sideway: New York for the first time, the graphical style of the game is the first thing you'll see. It's slick, the graffiti aesthetic giving the first few menus a distinctive look. Once you start a new game however and realise exactly what the gameplay involves, you get a genuine wow moment. Sideway: New York takes it's graffiti stylings as literally as it can; this is a 2D platformer played along the walls of a city. You use spray cans to attack painted enemies, create new platforms and progress further. Though the novelty of this original concept does run dry eventually, the early moments you have with the game are magnificent.


Describing Sideway as a 2D platformer is probably inaccurate, as while all the jumping and exploring you do is on one plane, you move between surfaces with ease. Gravity is relative in this world too, so if you end up on the top of a building, the direction you come from will effect the orientation of the world. This makes for levels that are much more diverse than they appear, and you will often revisit sections from other angles. Used in conjunction with a load of collectables to find in each stage adds variety to what could become a stale experience. These neat touches make Sideway unlike any other platformer on the console, the mix of 3D and 2D pushing it into territory never before seen.


As I mentioned above, the styling of Sideway: New York is key to its appeal, and while graphically the game may seem basic, this adds to the charm. The 3D environments are solid, with the visual focus being placed on your character and the things he interacts with. Everything looks like it could have been sprayed onto the walls, from the platforms you jump between or the tags you use to travel from stage to stage. It's an eclectic game visually, which goes a long way to making this a must have on the Playstation Network.

Sideway: New York is unlike anything you’ll have ever played. For this fact alone, it’s worth a look. Even if the platforming itself is floaty, and later levels fail to inspire the same ‘wow’ reaction that early ones do, this is an interesting addition to the PSN. The graffiti aspect is more than simply a gimmick, and with such a distinctive art style platformer fans should definitely give Sideway: New York a try.

The moment you realise exactly what Sideway: New York is is a true ‘wow’ moment. 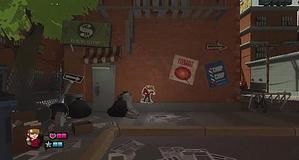