It’s not what you know, it’s who

Sol Trader is an indie strategy/simulation game that brings in a variety of features from all kinds of genres. Taking strong inspiration from games like 1984’s Elite and 2006’s Dwarf Fortress, Sol trader incorporates a completely randomly generated universe each and every time you play. The game was a solo effort on the part of the developer Chris Parsons, which given the scope of the title, is pretty impressive.

Sol Trader takes the ideas of nepotism and information brokering and places them into its core design. Information is king and is traded just as much as money in the game universe. Learning secrets, blackmail and building influence with people is as important as flying around shooting pirates.

The focus on relationship building and using information to gain influence is a nice change from the more traditional fight and expand simulation games. The game randomly populates an entire universe of characters each with their own personalities and back stories. These mechanics mixed with Asteroids style space combat makes for a unique tone. 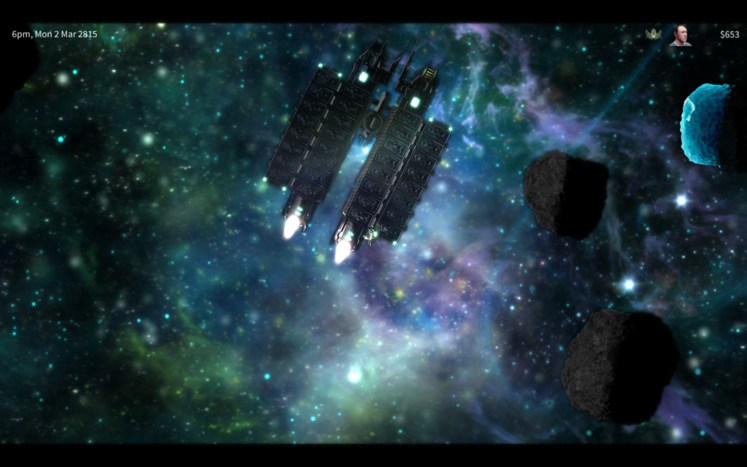 The game starts off with you choosing what parents you’ll have and certain events that will happen in your childhood, the choices form the basis of your starting character including family contacts, personality traits and reputation. You can also select several different end game objectives for your play through from becoming famous to more industrious objectives such as mining every asteroid. Once this is over you start on a planet with a message from your father serving as a tutorial.

Sol Trader doesn’t hold you by the hand and give you a linear path to follow. It’s down to you to get what you want. You start off with a small sum of money in the bank, some friends and family and that’s it. Yes, you don’t even have your own ship at the start and you must either take out a bank loan to hire one or invest in some friends and family to borrow one. This very much sets the tone for the game, nothing in life comes free.

One you managed to get a ship, it’s time to set some goals to make some money especially if you hired a ship and have a bank loan to pay. There’s such a variety of progression in Sol Trader that gives the experience a sense of daunting freedom. You can mine, trade, work a job, take on contracts and more. It’s important to choose a path however that fits your end game goal. 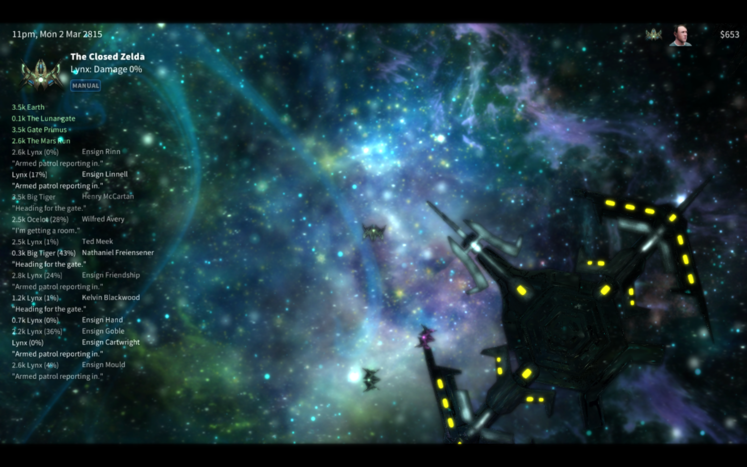 Upon leaving the menu filed user interface of a planet, the game transforms into a 2D top down space shooter. The combat has some satisfying skill based fights in there mixed with a ship component system that’s easy to use and upgrade. There’s a variety of ships in the game to choose from, all of which are good for various roles. After all, you can’t be trading good with a fighter that has no cargo hold.

The space combat is probably the most satisfying part of the game. However, travel times can be long and boring especially early game when you don’t have a fast ship. Even worse is that there’s no galactic map meaning should you get a mission off world, you have no idea where you’re supposed to go, a glaring oversight.

Information brokering is all well and good but the lack of clear direction from the tutorial and messy menu system can leave planet side experiences at best confusing and at worst outright frustrating. The core design ideas behind the game are solid in foundation but the execution of some elements is poor and obscure. 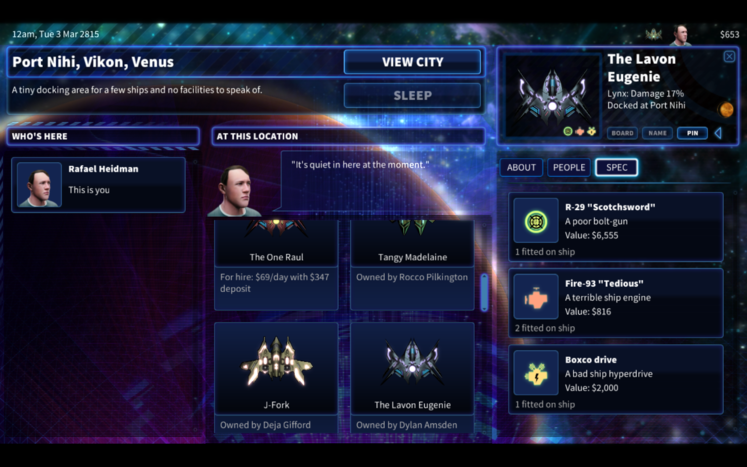 The user interface is probably the biggest issue the game faces with walls of text, unintuitive browsing and lack of flow. Getting used to how the games information system works can take a lot of trial and error and it is certainly not something you can pick up and play.

When the game runs, it runs well. The space side has a nice art style because of the low system requirements, never really runs into any framerate issues. The game does have a few bugs however including the fact that it can and did crash on several occasions. In a game that you have to invest serious time and thought into, regular crashes can be annoying.

Other than the crashes and like I have already mentioned; the UI is a problem. It has been much improved in the course of the beta tests. The endless menus and walls of text you must scroll through can be overwhelming. The biggest issue in the UI is that if you don’t pin a person of importance to the top menu and click off, you have to laboriously trail back through screen after screen. 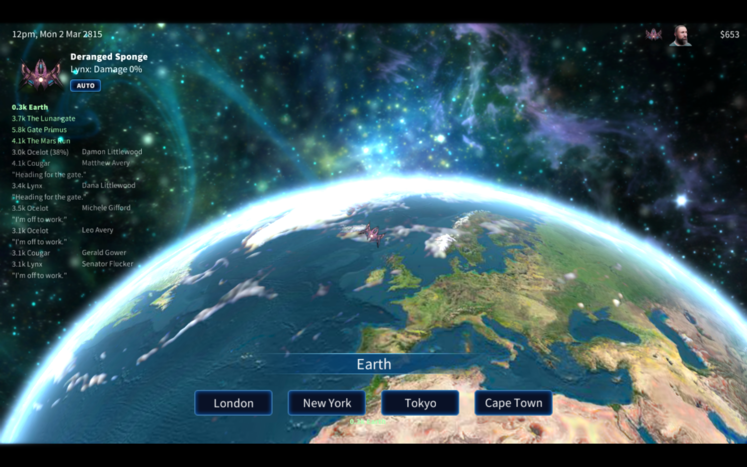 Sadly, there isn’t much to write home about from the audible side of the game. The musical score and sound effects do the job but don’t have the polish or depth of a full professionally scored game. Most of the time it’s difficult to tell there’s music when there’s some quiet ambient noise in the background. It’s a shame because a great musical score could have made menu diving a more pleasurable experience.

When a game procedurally generates 200 years of history every time you start anew. What you end up looking at is your very own little pocket universe that is completely unique to you. This is a rare quality of a game that allows you to experience something completely different than other players. There is no best way that can be found on forums, only your way.

The random nature of the game coupled with non-linear progression and a unique information system creates a game of unbelievable scope, especially given that it was created by one man. Sol Trader literally bends genres taking a little out of several to create something that’s feels very old and very new all at once. 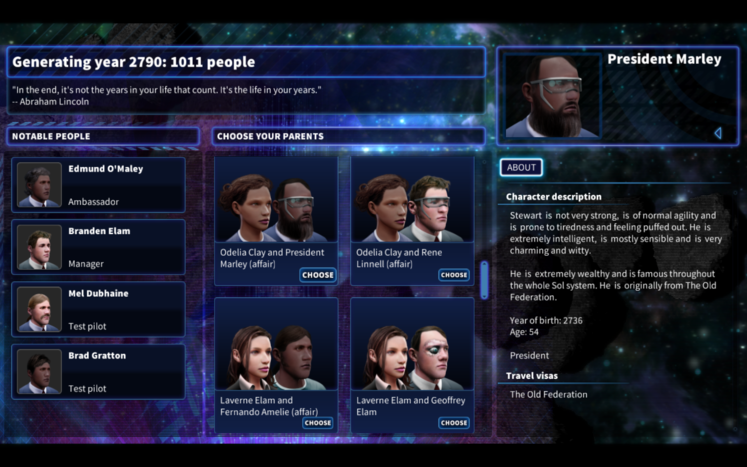 It does have several pressing issues however that cannot be overlooked and affect gameplay severely. The lack of navigation tools such as a galactic map making travelling for time sensitive missions near impossible. There’s just some odd design choices and glaring oversights that make the games slow paced nature, troublesome.

The focus on building contacts and relationships in a genre that frankly has never been particularly inventive nor good with diplomacy is a breath of fresh air. Considering the game is competing with some heavy hitters this year with the likes of Master of Orion and No Mans Sky, it has managed to stand out from the crowd in this respect alone.

Sol trader has some issues that’s for sure, yet under is rough visage contains a game of surprising freedom and depth. It’s a strategy simulation that has enough in it to appeal to many different playstyles and thus players. The focus on information and relationships has set this apart from the pack and created something that is well worth playing.

Getting into your first hunk of junk is an achievement in and of itself. Particularly if you put in lots of time with your relations to get it for no monetary loss. 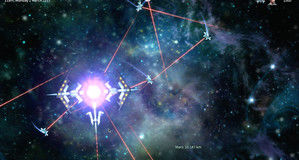