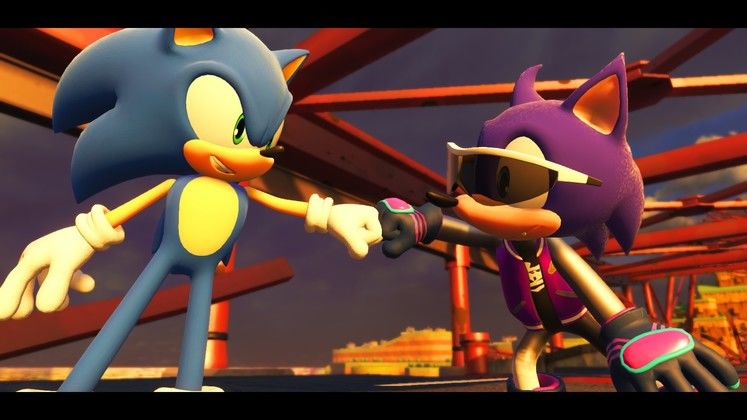 In an unusual set of events, Sonic Forces is the second Sonic game this year. Imagine if we’d got two Wolfenstein games in 2017, one being the advanced 3D experience and other being an improved throwback to Wolfenstein 3D? Actually, that’d be awesome, get on that Bethesda. Sonic got the astonishing Mega Drive/Genesis-style Mania just a couple of months ago, now Forces is here for the modern 3D fans. Some might call that an uphill struggle.

Read all Issues of the Sonic Forces Prequel Comic Here! Sonic Forces - How To Stop Cutscenes From Stuttering, and Mid-Range PC Performance Test For Sonic’s next 3D outing, in a year that had already seen him achieve perfection in Mania, Sonic Team felt that the best approach would be to throw everything from every 3D Sonic game into Forces and see if it worked. It doesn’t. Sonic Forces boasts 3D and 2D stages, it has Wispons from Sonic Colours, Classic Sonic from Generations, team-ups from Heroes, classic levels, classic villains, and a new antagonist who’s clearly just a palette swap of Shadow in Sonic Adventure 2. As a result, none of these things feel special or are utilized in anything more than a half-hearted fashion. 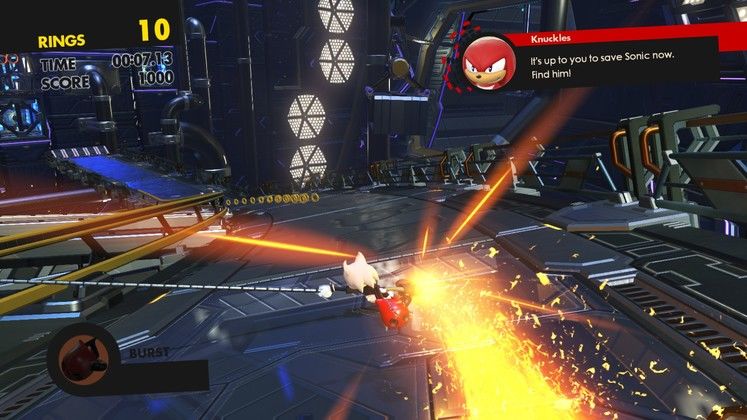 I have always theorized that Sonic games can work in 3D, all it needs is someone other than Sonic Team to do it. Sonic Team seem incapable of learning from their mistakes, so they follow what they think fans want without addressing any of the actual faults the 3D Sonic series has had since Sonic Adventure. Badly acted and written cutscenes, a terrible camera, bugs, perils that you couldn’t possibly have known about without hitting them first, levels that require you to play exactly as the developer intended and if you don’t you die – probably by flying off the course at high speed? Sonic Forces boasts all of these.

And the 2D sections are worse, frankly. I honestly wish Sonic Team had ditched them. Not only do the levels look dull this way, there’s no cleverness or skill in them like there was in Mania. And most importantly, they control completely wrong. The physics are off, sometimes Sonic won’t jump when you tell him to, it’s hard to tell how high Sonic can jump, and they just feel wrong in a way Sonic Mania felt right. 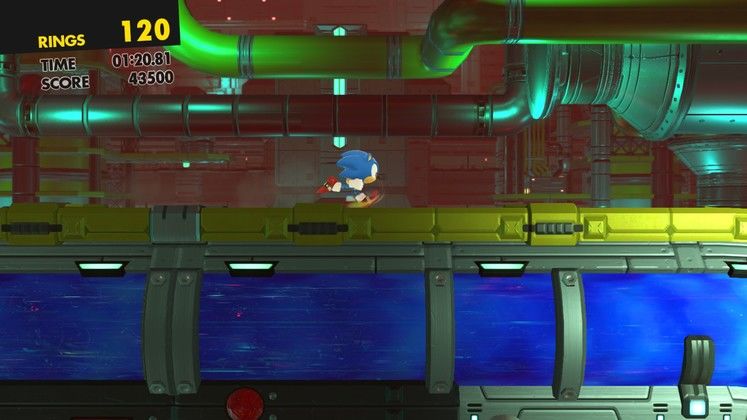 The 3D sections, at least when they’re not killing you in glitchy unfair ways, are fun. They’re a rollercoaster ride of action, thrills, and occasionally even imagination. When they focus on being mad visual extravaganzas the 3D levels can be great, and provided I wasn’t flying out of the world because I pressed ‘jump’ at the wrong moment I had fun with Sonic Forces all the time.

Then it was over. I have played almost all, and completed most, of every mainline Sonic game ever made. And I can tell you that Sonic Forces boasts the shortest play time, and the shortest levels, in the series’ history. Level 14, a big 3D level later on in the game, took me a grand total of 1:26 to complete. A secret level I played straight after that took me far less. The story can be completed in around 4 hours. There’s replay value, in collecting all the Red Rings or optional “SOS” missions that pop up, but that’s your lot. 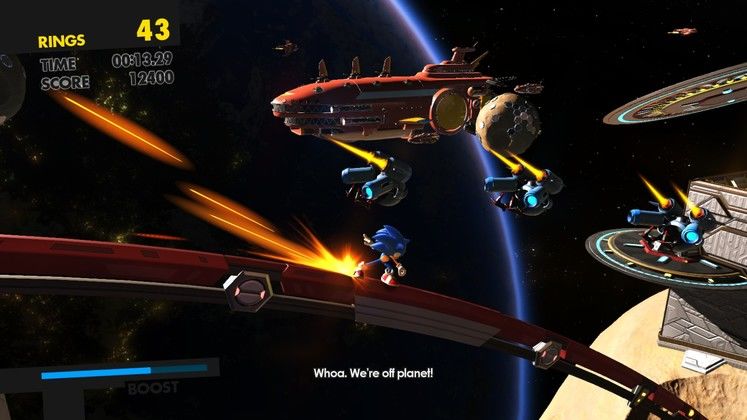 Our test system was an AMD FX-6300 Six-Core Processor, 16 Gb RAM, Nvidia GTX 1050 Ti 4Gb, and Windows 10 64-Bit, and Sonic Forces ran pretty much flawlessly. It doesn’t look amazing, at least not much better than a last-gen 3D Sonic game, but levels have a lot of detail especially in the earlier parts of the game. However the one oddity is that, currently, cutscenes ran utterly awfully, in fact they were unwatchable because they stuttered so bad. Check out here on how to fix this, at least before a patch sorts it out. Hopefully. 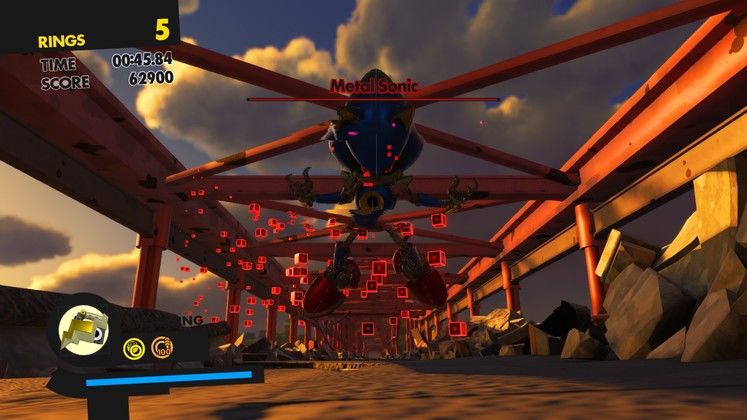 Special mention has to be given to the game’s music. Normally I’d be all over praising a Sonic soundtrack as even the bad games usually have great tunes, but Forces has one of the worst soundtracks since Sonic 4 Episode 2. The best tracks are just riffs on older songs, and the new stuff is uniformly bland. In particular we have to point out the Classic Sonic stages with their tuneless, boring attempts at 16-Bit music. For example, compare the remixed Chemical Plant Zone Act 2 from Sonic Mania to the Chemical Plant Zone Classic in Sonic Forces. 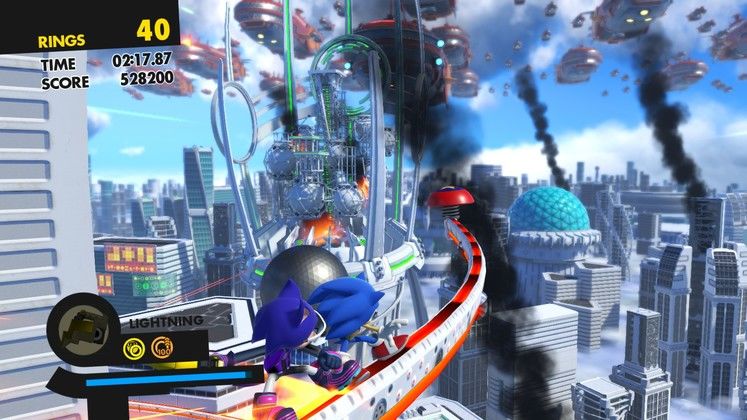 Finally, we have to note that Sonic Forces feels cheap. We’ve mentioned how levels are shorter than usual and the game’s over with quickly, but this cheapness extends to the cutscenes. Most of them last a few seconds, and then cut to either text or the characters explaining things to each other on the Map screen. The Episode Shadow DLC consists of reused levels and doesn’t even have a boss. One unimportant character shows up dramatically in the final battle but Sonic Team never bothered to introduce him or explain how he got there. Chaos, the main villain of Sonic Adventure, gets introduced in the opening and then never appears again Most of the boss battles are just the same battle with Infinite over and over again… and then he just disappears! He’s the main villain and they didn't show what happened to him! 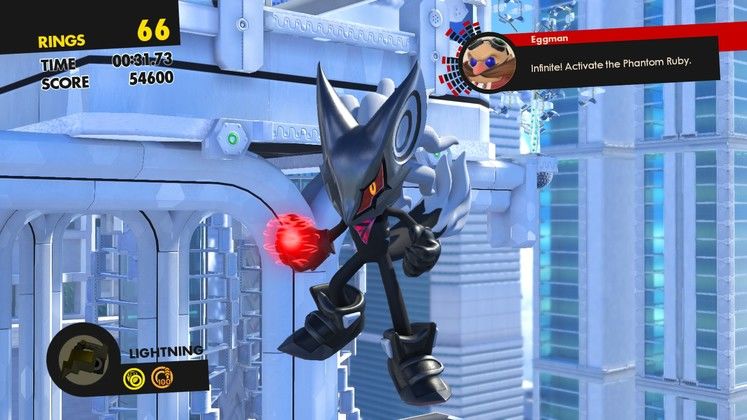 The one bright spark in all this, that makes Sonic Forces feel at least a little worthwhile, is the Avatar creator. It starts off quite simply, with 6 species, gender, expression, colour, and a few basic clothing options, and once you’ve unlocked more options you’ll have made a truly unique character. And we can’t deny, seeing our own player character do a fist-bump with Sonic gave a happy little thrill.

We get the impression that Sonic Team wanted Forces to be the Best Sonic Game Ever, with a Greatest Hits package of everything good in the series, but they didn’t have the time, money or talent to accomplish this. The 2D sections control poorly, and the 3D sections sport the same problems that the series has had since Sonic Adventure – such as dying if you don’t play the level exactly as the designer intended. There’s fun to be had, but even then Forces feels so cheap and abrupt that you’ll be finished with it entirely in 4 hours. It’s not the worst 3D Sonic game, but in trying to do everything Sonic Team didn’t really accomplish anything.

Next time, stick to just Generations 2 or Colours 2. Or even better – give Sonic entirely to other developers.

Having your Avatar character get a fist-bump from Sonic.