Sorcerer King: Rivals is the standalone adaptation of the original Sorcerer King 4X strategy game by Stardock. The updated game contains all of the original’s content with additional features such as two new factions, balance fixes and various minor content additions. 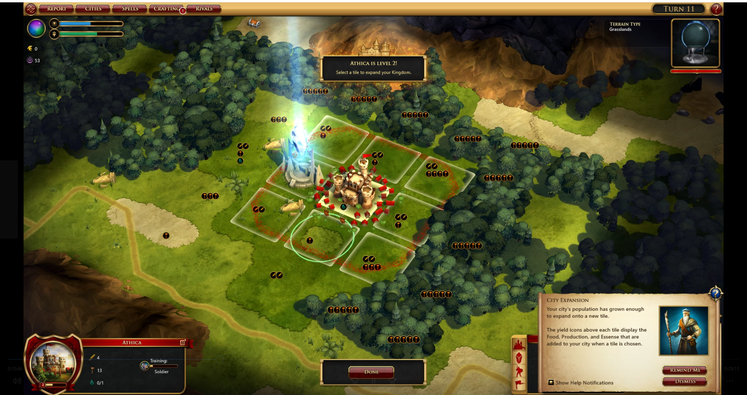 Most fantasy games have you lead your people to defend your land or save the world. Sorcerer King flips the traditional story on its head by having the game begin after the evil bad guy already won. The sorcerer King controls the land and has handed down power to leaders of the factions to control the populace while he continues his world ending schemes.

At the start of the game you choose a faction and sovereign to play as. Your choice of sovereign and faction can have multiple affects to how you play. Each sovereign has access to several spell books, abilities and also a starting group of units. While there are differences in terms of spell books (which are basically technology trees) and other faction units, any difference beyond that is purely an aesthetical one. 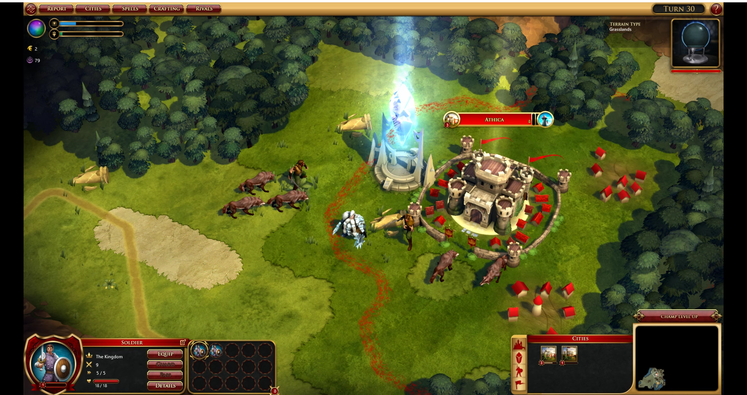 Once upon a time there was a dwarf and three wolves

The main goal of sorcerer king is to build up your forces and overthrow the sorcerer king before he can ascend to godhood. A task easier said than done, given he has already conquered the world with a giant army and you have naught but a city. The fact is, from the start, the sorcerer king is much more powerful than anyone. If you openly defy him by disobeying his orders or attacking his armies, he’ll come put you down.

To succeed in Sorcerer King Rivals, you must strive for a balance of expansion and submission. You must know when rebelling is right and when its best to knuckle under. The evil madman himself will regularly talk to you as you technically are one of his vassals and give you instructions or provide resources for you.

This whole idea combines into the ascension points mechanic where by your actions will decrease points the sorcerer king has which is a good thing or he will gain them becoming closer to judgment day. Should he evil wizard gain enough points to ascend the game is over and the world torn asunder. 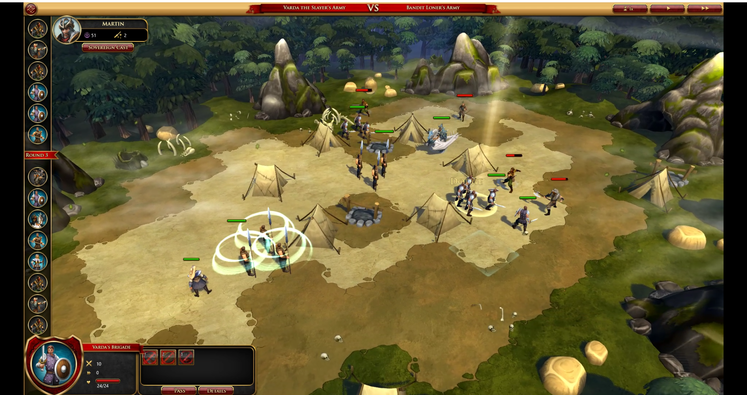 Similar in many ways to the Heroes of Might and Magic series, Sorcerer King focuses on both normal units and champions. These heroic individuals can be leveled up to increase their stats and learn new skills. Champions are a force to be reckoned with on the battlefield which can be intensified with equipping them with various weapons and armor.

Sorcerer King boats a large loot system including drops from battle, quests and world events. In addition to the normal equipment, you can also loot crafting materials that can be used to craft powerful gear for you champions and units. Equipping items as you level units and improve their skills is essential to survival.

Quests are a major part of the game’s experience and can be picked up anywhere from inns to random encounters. Quests often involve a choice system that depending on what you choose, decides the reward and outcome. The humor imbued in the writing is also a large positive and it’s certainly a game that doesn’t take itself too seriously.

It’s hard not to love the various champions and units that Sorcerer King offers especially given the fact that many uniquely named units can be gain from quests, like the stable boys who formed a unit in my army. These aren’t unique units by any means in fact statistically and graphically they are the same as a normal troop of soldiers. However, the fact that the unit is called stable boys, adds a sense of personalization as I remembered the quest and circumstance that led them to me. 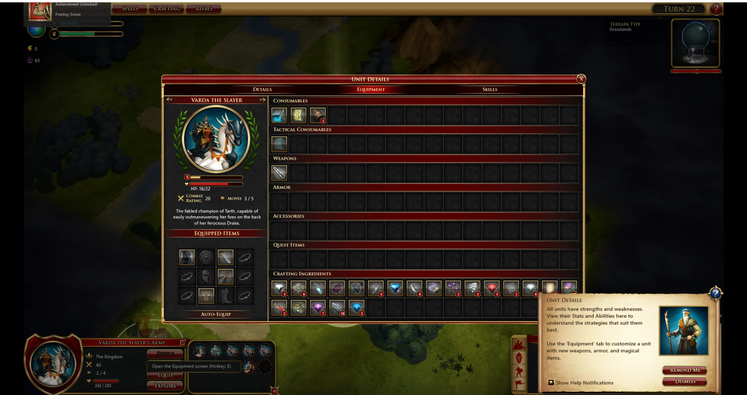 This helps the game feel like yours, instead of thousands of others having the exact same experience. The different army make up depending on what choices you made in certain quests is a nice touch that goes a long way to make army building satisfying.

Combat is something this game does well as it tries to imitate the turn based combat of the Might and Magic Heroes series. It’s a fairly simple system with a tile based grid as the battleground. Units and champions can use items and their own given abilities. It’s a solid system that provides players the chance to defeat an opponent based on tactical skill and not on pure numbers.

Sorcerer King Rivals has all the basic 4X components down to a good standard. The major problem in the game falls into its most unique mechanic, the sorcerer king’s ascension. Playing this game like any other 4X would have a quick negative impact. Expanding quickly early game as is a good idea in most 4X games would in fact put the sorcerer king on your tail too early. The games doomsday mechanic while certainly fun can break apart the traditional fun factor of a 4X game at times by constraining what you can do within the boundaries of not getting attacked too early. 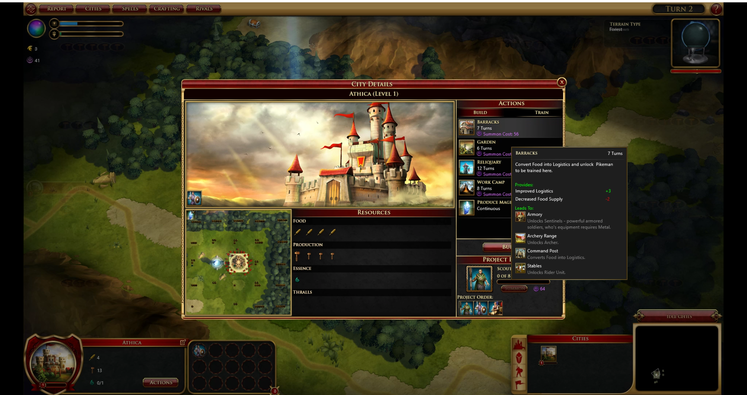 The game has a nice vibrant graphical style that lacks an attention to detail. While similar games like the Might and Magic series contain stellar visuals, Sorcerer King: Rivals looks like an old Warcraft game and not something that was developed recently.

The game does run smoothly and with a lot less technical problems that the original, the lack of detail in character animation as well as the texture issues are still laid too bare. It is by no means a bad looking game but when as a game you try to put a focus on personalization of units and heroes, it’s better to have them not look like colorful blobs close up.

Pompous trumpets, mystical synths and ominous dark tones are all present in this fantasy escapade. The game’s soundtrack does a good job of being present but doesn’t provide a real atmospheric feel. The lack of voice acting is also a disappointment as some good and humor filled narration could have really tipped the scales. 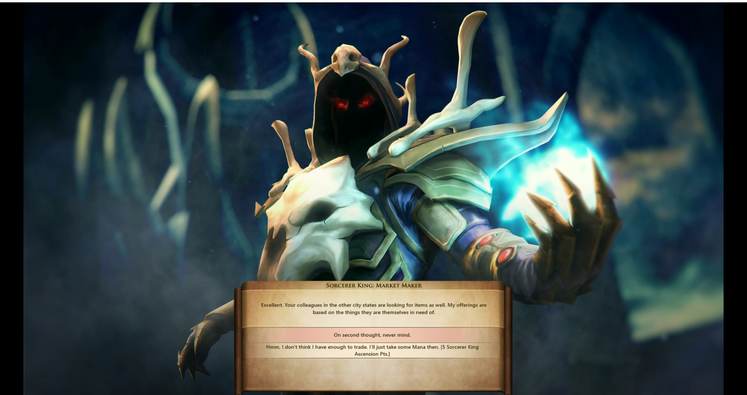 The Sorcerer King greets you

Newcomers to the series will find value in this version over the original however. Its story premise alone means it’s worth a look. It’s a good solid fantasy 4X that holds a good amount of content and value but also contains a specific set of problems that hold it back from being a truly great game.

The saddest part is that the elements that ultimately hold the game back were also present in the original version. The game needs more customization options and less early game stifling. The theme is so good and the ideas for a stellar game are all here, it just needs better execution.

In all Sorcerer Kings Rivals remains exactly what the original was, a decent game. It lacks the customization and in depth options of its competitors’ but it’s theme and unique qualities make it a fun experience, at least for a while.

Running around completing quests with a champion that adds the most random people to your army is a blast, can’t beat the travelling knife salesmen unit. A slight improvement on the original in terms of score but not by much. 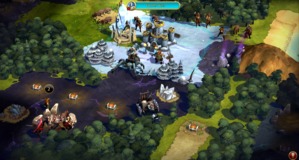