Hotly anticipated as one of the PC games to look out for in 2008, Space Siege is the latest action-RPG from Gas Powered Games

Hotly anticipated as one of the PC games to look out for in 2008, Space Siege is the latest action-RPG from Gas Powered Games - spearheaded by Chris 'Supreme Commander' Taylor and the designers of Dungeon Siege 1 and 2. Taking shape as an epic click-fest along the lines of Diablo or Titan Quest, this sci-fi looter attempts to distil the genre to some fundamental gameplay roots, but unfortunately jettisons the majority of interesting mechanics along the way. Simplifying an already uncomplicated genre perhaps wasn't the greatest idea.

To set the scene, Space Siege sports the same battle-weary and cliché heavy plotline as so many other science fiction stalwarts. Taking control of the last survivors on a human spacecraft overrun with an alien lifeform hell-bent on making it to earth (after some ill-advised military prompting from our own species), it's down to you and your band of allies to tread through repetitive corridors and destroy scuttling enemies to collect loot for weapon upgrades – what little there are to choose from.


Initially, Space Siege shows itself as a highly-competent if distinctly generic action title. You left-click to move your character or interact with the environment, right click to fire on any given target, or hold shift and right-click to free-fire in any direction you choose. Movement speed is quick, with each location sporting an uncompleted layout and a narrative arc that clips along at a pleasing pace. Evasive manoeuvres can be activated, grenades can be thrown, and it's all very stoically based on existing dungeon-crawling design stereotypes.

Augmenting the basic combat is an MMO-inspired hotbar containing various skills that gradually whittle away at an action meter, whilst your health needs to be constantly topped up with medpacks salvaged from the surroundings or crafted at a workbench location. Combat is swift and gratifying, with a pleasant mix of old-school top-down fixed-perspective camera movement and distinctly new-school physics integration. Barrels explode and affect the surrounding environment and corpses, lending a somewhat chaotic and compelling sense of unpredictability to each firefight. Fun, while it lasts...


...which isn't very long. The decision to strip RPG elements leaves a roughly 10-hour experience devoid of any depth or replay value – with basic action gameplay that can't hold up on its own. There is no levelling system in place, only basic looting and upgrades for weapons, and a paltry selection of interchangeable combat skills to experiment with. After the initial rush in the first hour of play, Space Siege quickly plumbs the depths to deliver an experience characterised by repetitive trudging through endless grey corridors - precisely the antithesis of varied environmental design that made the likes of Titan Quest so well received.

On top of this, the pre-release hype surrounding the overreaching question of morality found in the cybernetic upgrade system turns out to be little more than a gimmick. Choosing whether or not to fit that final metallic augmentation and throw away your last vestige of humanity really doesn't make for a hard decision – whatever varies the gameplay most will prevail every time. It's a shame for a title with such lofty narrative ambitions to boil down to a 'humanity' meter that slowly chips away with each bolt-on, and a far cry from the deep experience we were promised.

That said, if you’ve really nothing better to do on a weekend then Space Siege will undoubtedly please the less-demanding action gamers amongst you. Combat is solid, and 4-player co-op support gleans some enhanced entertainment – but nowhere near enough to raise the execution above anything approaching average. If you’ve not given Titan Quest or Diablo a try, there really isn’t anything contained within Space Siege to make it worth your while. 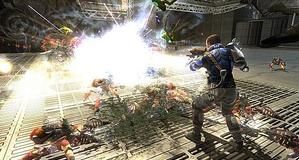