Stained is an odd little thing. A platformer set in a ruined fantasy castle filled with puzzles and bizarre creatures, I suppose it's got most in common with the Trine series. Whereas those games had a fairy-tale world so lush and detailed you could almost breathe it in, Stained immediately feels sort of cheap by comparison, with the game world feeling oddly dull and lifeless. Which is fitting I suppose, since you play as a man who looks like Death. For no good reason I can fathom, even after completing the game.

The plot, such as it is, attempts to explain why you're making your way through the castle. A pre-game cutscene tells the story of a King who once owned the property you're currently vandalising. He built the fortress and filled it with magical guardians who resided in those stained glass windows. What originally seemed like a sound tactical move went somewhat awry when an evil force known only as 'the Scourge' infiltrated his home, corrupted all his servants, soldiers and family members and stole away the kingdom. Escaping with his only child, the King managed to protect his offspring by hiding him in a lifeguard. An object called a lifeguard, obviously, not one of those chaps who do such a fine job protecting our holidaymakers. Honestly, I don't have the faintest idea what was going on – levels are bookended by impenetrably dull journal entries that tell what could generously be described as a story, but I defy anyone to care a jot about whatever the hell's going on.


Almost every puzzle in the game revolves around the ornate stained glass windows placed throughout the castle. Stand in the right place and you can thump your staff into the ground, shattering the glass and usually progressing the level in some way; either by releasing an enemy that holds a key you need to progress, summoning a crystal ball that you can use to smash through previously impassable doors, or collecting shards used in jigsaw-like puzzles. Breaking things is sort of fun. It's a nice, satisfying quirk that works well with the fairy-tale fantasy aesthetic and provides some satisfying visual and audible feedback to all your jumping about.

It doesn't do much to improve combat, however. Enemies seem to lack both a sense of aim and the ability to avoid your attacks, which leaves battles as something of a clumsy mess. Most are won by standing in place and swinging like a madman with your scythe. Only the brief sound of tinkling glass as your enemies shatter into pieces provides any sense of satisfying impact for your undignified flailing. Enemies either miss you completely despite basically standing on your feet, or stun-lock you into insensibility with a few well-placed blows. Basic monsters don't really do all that much damage, so things never get infuriatingly frustrating, but it's still a bit of a shambles.


Every other level or so you'll stumble into one of the game's boss battles, which set you up against various towering crystalline monstrosities. Some are so easy they barely earn the name; a clockwork golem early on can be slain by jumping up on a chandelier and then dropping it on his head a few times. Others, like an odd contraption that slings cogs at you, are a little trickier to work out, but generally fall with little fanfare after you work out the particular strategy needed to defeat them. They're fun enough but feel a little too dully mechanical, with simple repetition enough to win the day once you get what you're meant to do. Boss encounters aren't free from bugs, either. More than once I had to restart a level (which thankfully doesn't take too long, as levels don't tend to last more than a few minutes) because I couldn't tempt a boss from his perch, or because my key items weren't working properly.

Platforming, the second major portion of the game, doesn't convince either. Jumping varies between pointlessly easy to frustratingly imprecise, with the main character hurling himself from side to side with every slight tap of the directional keys. For example; early on you're traversing a set of crystal disks suspended over a pit of spikes. They're spaced out just enough that you need to adjust your position mid-air, but the controls are so sensitive that I spent roughly forty-five minutes over-egging it and impaling my avatar on various pointy objects.


The rough feel stretches to the animations, which feel stilted and in places incomplete. One of your moves, a sort of scythe-aided wall climb, looks particularly strange as you glitch your way awkwardly up flat surfaces by hacking away with your scythe. When a major form of movement looks like a bug, there's something wrong. Graphics are acceptable, but despite all the shards of stained glass flying around there's a strange lack of colour and life to proceedings. The castle feels like an empty box with a few bits and pieces thrown in rather than a vibrant and intriguing place to explore.

With more time and more polish Stained could be a perfectly decent little platformer. As it is, though, it’s hard to recommend even at a stripped-down price. There’s some heart and inventiveness on display here, but not enough to mask some very rough edges- animations are janky, the world is muted and unappealing and key features like combat and jumping feel imprecise and unfinished. If I was playing this in an early alpha build I’d advise you to give the developers time to polish and refine, but for a final release it falls some way short of the mark.

Crushing a giant crystal statue into shards by working out his attack pattern and swiping at him with your scythe, accompanied by the sound of tinkling glass. 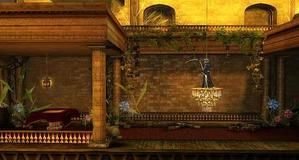