Steel and Steam is an RPG that aims to respect past. While a noble quest, the result proves that more was bitten off than could be chewed

Game maker tools can be an extremely useful advantage for the practicing independent developer. Though basic these tools make videogames a lot more of a palatable medium to contribute to. Suffice to say a lot of prominent indie devs have come from these types of tools, with a couple of them still using them to this day. Now while this may seem irrelevant or even flippant, the following review of Steel and Steam hinges on this fact. Not because of engine snobbery but because RPG maker just so happens to be at the core of this games numerous problems.

At its heart Steel and Steam is essentially an old school RPG. Taking into account its style, gameplay, and design philosophies the obvious inspirations stem from games such as the Dragon Quest series, or even the retro Phantasy Star titles. The gameplay can then be tracked down to the components of those classics. You roam around in a birds eye view of the world, taking your tiny sprites to various villages and mines, then receiving your next quests. The battles take the form of turn-based duels viewed from behind your character, and these will be bought upon by random encounters. If it sounds like you've done this before, it's because you probably have.

However this isn't inherently bad. Game mechanics are reused all the time, and it's often in this way that they're improved. But unfortunately Steel and Steam does nothing to make these old RPG systems work. The battles are quite boring and involve very little planning on your actions, the overworld is practically useless, and the random encounters are nothing but aggravating. It's like the designer knew the conventional mechanics of the retro RPG, but didn't know what made them work. Instead it feels like these systems are only in place because an older game used them, not because they were good systems. This is for example, one of the only reasons why I think random encounters are such an important aspect in Steel and Steam. This makes traversing the world an annoying experience, and more so for any dungeons you might come in contact with. The only challenge Steel and Steam executes is to throw random encounters at you while you explore empty areas. I rarely found anything else preventing my progress too- it was all just random encounters to get to the mcguffin that would forward the story. This isn't to say that this system can't be good, it just doesn't feel like it was made to fit into this game, just put it because the inspirations did it.

Gameplay wise- there isn't much to write about. Even in the sides quests, the game seemed to revolve around getting to point A to point B with little to no flair in between. It's clear that the developers love the genre, but ironically in trying to emulate retro RPG gameplay, they just made a worse version of it. There's just nothing to compliment these systems.


Unfortunately in regards to the story, there still isn't much to say. The game just kind of begins suddenly, and with no motivation you're trusted with two characters to start an adventure. In fact it seems like the player has only just started the adventure, with your party knowing and caring much more about the world than you ever will. You're just thrown into this world and given an objective without any real reason to be invested in it or your party. Steel and Steam basically skips its entire first act, and suffers because there really isn't much pushing you along when you start out. It's like the game begins with the lull instead of an opening. Granted the story shows itself along the way, but it really isn't worth it as the writing is just not good enough- or at all. Characters have little to no personality, text is mainly plain conversation to get you to the next quest, and NPC's say nearly nothing of value or fun. For any game writing is crucial but for an RPG having such poor quality in this area is even worse.

The same could be said for the art, which really gives away Steel and Steams RPG maker origins. All the overworld sprites look like generic chibi designs, and remind me strongly of the placeholder sprites used for many RPG maker projects. The art for the battle screens is slightly better, and the character portraits have a lot of detail in them. But for most of the game you will be staring at sprites which have become synonymous with default game maker styles.


Though style in general is a big problem for Steel and Steam too. In every aspect the game looks like the very definition of a 'generic' RPG. I had a feeling from the villains lair that the game would encompass a steampunk feel to it, but apart from that room and the games title, there isn't much steampunk in the world. Instead it just looks like a boring 'default' universe. A bland creation that offers nothing of interest to look at, which is a real shame because the very same could be said about its music. I do not think I've heard something as bland as the soundtrack to Steel and Steam. There is not one noticeable tune in the entire experience, and when it isn't boring you, the music is instead frustrating you with the same few tones repeatedly used too close to each other. Both looking at the game, and hearing it offers nothing to you but bland RPG cliches done badly.

And that almost summarizes the whole game. By playing Steel and Steam I get a genuine feeling of love for old school RPG’s, but it’s just not made well enough to truly honor that love. A word I would use to describe the game would be ‘amateur’. The story, music, gameplay, and art scream that this is just another RPG maker project. I would like to note that there is nothing wrong with RPG maker, but Steel and Steam simply does not transcend the criticisms that those tools for early developers receive.

The influences shine through, and it’s nice to see homage in a retro based RPG like this. 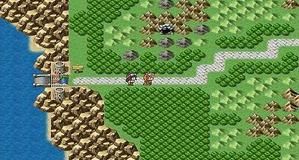