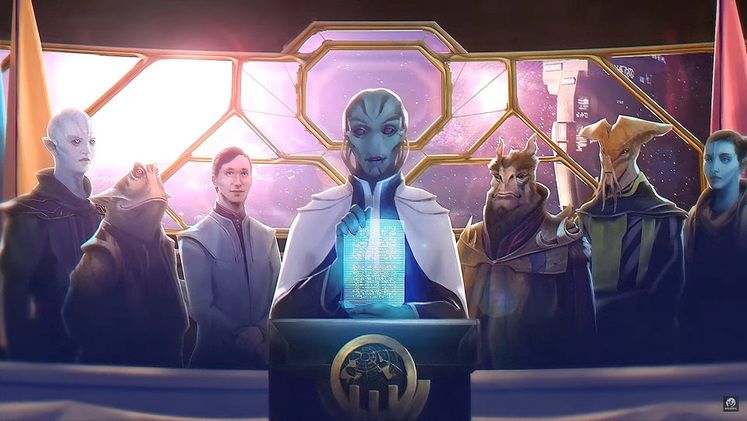 Four years in, and we’re finally here: Stellaris’ first expansion focused on diplomacy. Fleshing out one of the most important aspects of the game, which went unloved for nearly half a decade, Stellaris: Federations is all about the eponymous diplomatic bodies and the addition of a proper United Nations in Space™.

Let’s get one thing out of the way first - this isn’t a diplomacy fix. It doesn’t address the insensible fact that AIs still only accept trade deals if they’re screwing you over, nor does it add things like espionage and behind the scenes negotiations, but it does add more interaction options and a bit more nuance to what was a seriously lacking facet of the game. 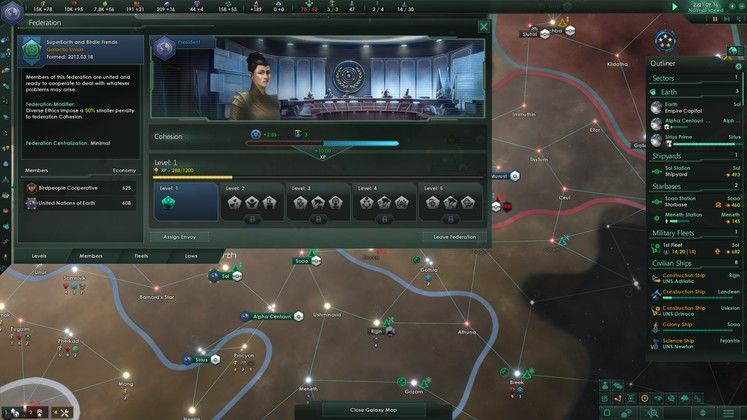 As the name suggests, Federations is very much focused on federations – intergovernmental bodies that unite two or more empires towards a common cause. The game launched (and had for 4 years) a single federation option, which included massive upkeep, little functionality, and a whole lot of headache. Aside from slowing your progress in detracting from the game, your AI “partners” would often take charge of the group and ruin everything you spent several in-game years through disastrous unilateral decision-making.

No longer; from now on, Federations are multimodal interfaces, full of laws, experience bars, and tooltips. It starts with the type of Federation – Galactic Union for the peace lovers, trade federation for the capitalists, and hegemony for those that, like Putin, pretend democracy is a choice while they crush freedom under a boot. Alongside research and military unions, these options give you a broad range of backgrounds to base your new alliance upon. 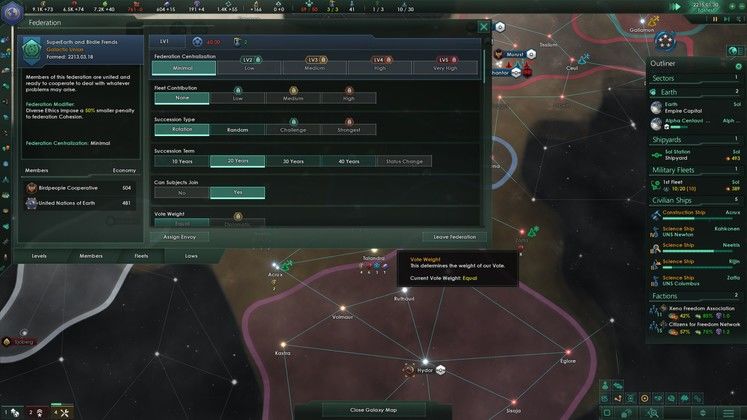 Once you pick a Federation type and some new Federation friends, it’s off to the actual politics – everything from succession laws to deal independence can be voted on, and an internal Federation cohesion grants you experience to level up the group with perks and bonuses. In a glaring and rather bad omission, you are unable to set the law charter when creating the Federation, and are instead burdened with a cookie-cutter group that requires you to put effort (and deal with your partners) to change any setting past the default – a consistently problematic proposition when playing with AI.

See, Stellaris still has a skeleton of a diplomacy, but now there’s a tiny bit of meat in those bones. The AI is as intractable as ever, but the ability to send envoys to improve or harm relations is a major boon – gone are the days of pure player passivity; we now get a tiny bit of agency when dealing with computer empires. Interestingly, these envoys can not only be deployed in foreign governments, but can also be sent to your Federation to improve internal cohesion. Given every Federation always starts with negative cohesion and must build it up, the ability of every member to send envoys directly impacts how quickly the monthly experience cap can be reached. 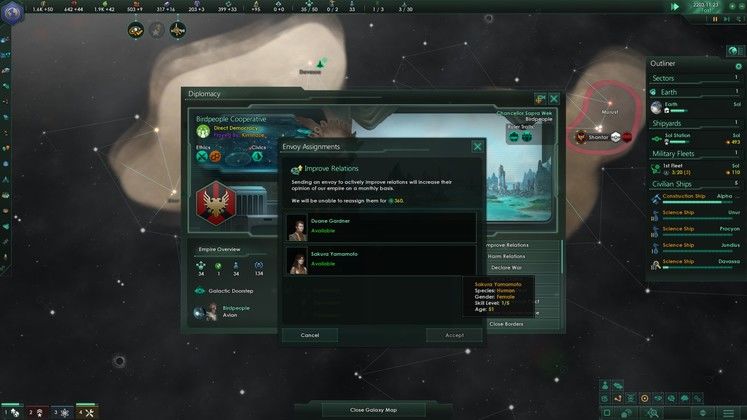 Unfortunately, the same AI rules apply to Federation members, and envoys to AI will never replace the ability to just chat up with someone reasonable to get something done. Given Paradox’s refusal to allow the AI to accept a deal when it is mutually beneficial (instead always needing to screw over the player in the deal), chances are most changes you want to implement to your diplomatic alliance will either require several hours of intense AI management or be curtailed completely for the rest of the game.

Another big addition in the DLC is the Galactic Community – a de facto Space United Nations which is automatically created when most races in the galaxy pretty much know each other. This interestellar senate can pass resolutions in a series of issues and topics, from defense and trade to sanctions and galactic focii, and their votes can be influenced based on your relationship with other empires. Similar to the Federation structure, you will still be dealing with logical-yet-insensible AIs, but the addition of the new tradeable “Favours” currency gives you an extra tool to tip the scales in the direction you want them to go.

For those who own both Utopia and Federations expansions, this DLC also adds the Mega Shipyard megastructure – a massive Star Forge-like facility capable of churning out whole fleets in minutes. A new giant ship which does not require Utopia is also included in the shape of the Juggernaut – a mobile starbase that can repair and even construct ships deep in enemy territory. 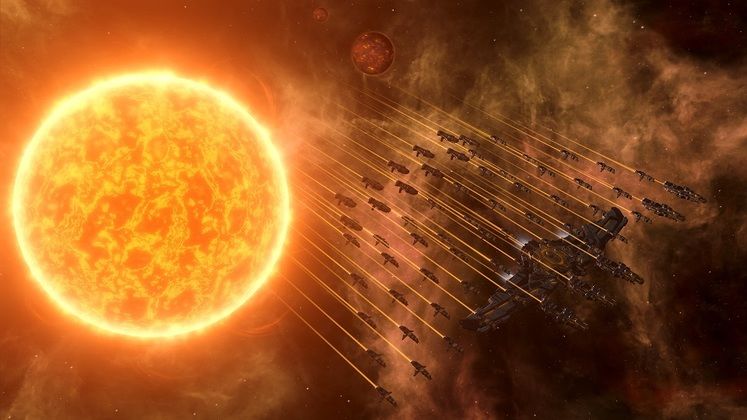 As usual, the DLC also brings new music tracks – these ones with a decidedly political edge to it. Their instrumentation and composition is reminiscent of Hearts of Iron IV’s soundtrack, which is a fitting decision given the theme of the expansion. The new UIs are also considerably better than some of Stellaris later additions, such as the ugly fleet manager and planet management screens.

The final DLC feature is actually part of the free patch: the replacement of some starting position civics for the new Origins mechanic. Every empire now has its own starting background with unique characteristics, from a “normal” united spacefaring planet with a proper population to a Krypton-like doomed planet who has to be evacuated before everything goes boom. The base game ships with around half a dozen origins, but the DLC adds up to 18 of them, allowing you a very interesting degree of customisation. If you always wanted to play a non-planetary space race or start the game in a Ring World, this mechanic’s got you covered. 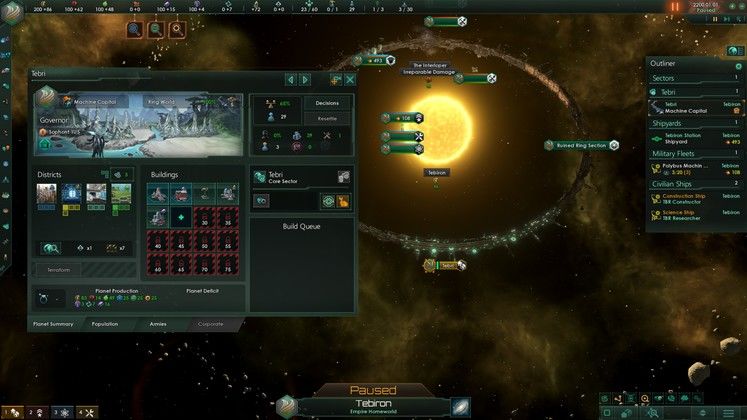 As always, Stellaris’ latest DLC is a mix of much needed additions and some blatantly missed opportunities. Federations, envoys, and origins were an important step in the road for a better game with more player agency, yet the the inability to actually create your initial Federation charter – arguably one of the most important aspects of the foundation of such an organisation – or the inexplicable absence of a Galactic Senate headquarters building somewhere in the galaxy make the expansion feel that much more incomplete in the details. Given these details have historically never been added post-DLCs over the past 4 years, Stellaris: Federations is a good addition which still falls notably shorter than what could have been accomplished.

A much needed expansion which still doesn’t deliver some pretty important facets.

Moving my Juggernaut and Federation fleet in a joint attack on those freaking tentacle dudes. 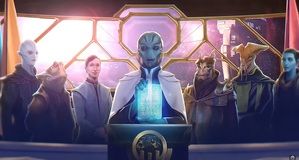 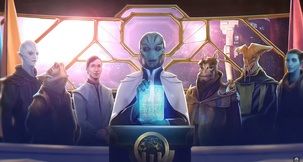