First impressions can be misleading, this much we know. However, if you were to look at video or a set of screenshots for Special Tactics and thought “Gee, that looks a whole lot like a top down version of Counter-Strike” then your assessment would turn out to be an accurate one since for the most part at least, that’s essentially what Special Tactics is.

In addition to cribbing inspiration from Valve’s seminal classic shooter, Special Tactics would also seem to doff its cap in the general direction of fellow tactical shooter Doorkickers, too. The carefully paced counterterrorism antics and top-down presentation proving familiar to anybody who has been fortunate enough to spend some time with the KillHouse Games product. 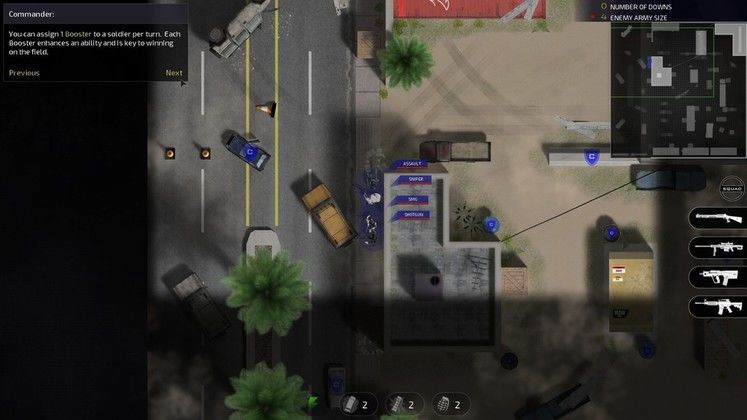 From increased damage to affording better armour, boosters can often make or break a strategy. Use them wisely

A top-down, turn-based tactical battler set in a myriad of mostly urban style maps, what Special Tactics sacrifices in presentation and content it makes up for with a solid core of strategic gameplay and engaging online battles.

From the top, Special Tactics offers a single-player campaign, survival and online multiplayer modes for folks to get stuck into. With only really three main modes for you to play the question of varied content becomes a valid one, while worse still, the single-player campaign is nothing more than a string of seemingly unrelated skirmishes very loosely threaded together with the most sparse text-only narrative imaginable. It’s perhaps just as well then that the real crux of Special Tactics appeal lay in its name sake and it is here, in the nitty-gritty machinations of its turn-based battles that the game more reliably impresses than anywhere else. 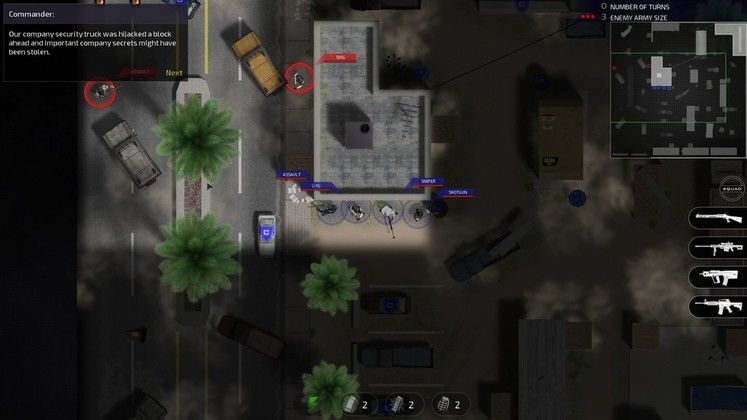 When an encounter begins, a planning phase kicks off where you must set out the actions that you want each of your different soldier classes to carry out. From moving to a location, attacking an enemy unit, tossing a grenade or all of those actions strung together, Special Tactics strategy beats might seem overly familiar, but the game has a few tricks up its sleeves that many of its peers do not possess. Chief among these is the focus point mechanic that allows you to move in one direction and look in another. Allowing you to do such actions as strafe, aim while walking backwards and a great deal more sophisticated actions aside, focus points provide the sort of scope for strategizing that few other efforts in the genre presently permit.

In addition to focus points, a variety of boosters can be used to improve the abilities of your squad such as bestowing increased armor or damage onto your individual units. Finite in use, while these abilities jive a little with the quasi-realistic approach that Special Tactics is going for, they do open up a new avenue on the tactical spectrum; a sniper who has your unit suppressed for example, becomes far less of a problem when your sniper uses an armour booster to soak up their killshot before returning one of their own to definitively end the encounter. Something else to consider is the four of five total different classes of soldier that Special Tactics allows you to control. Including such unit types as Assault, SMG, Shotgun, Sniper and Shield, each has their own strengths and weaknesses, the Assault class able to deal damage at longer range with a narrower field of vision for instance, while conversely, the SMG class deals greater damage with a larger spread, but has a far shorter reach to do so. 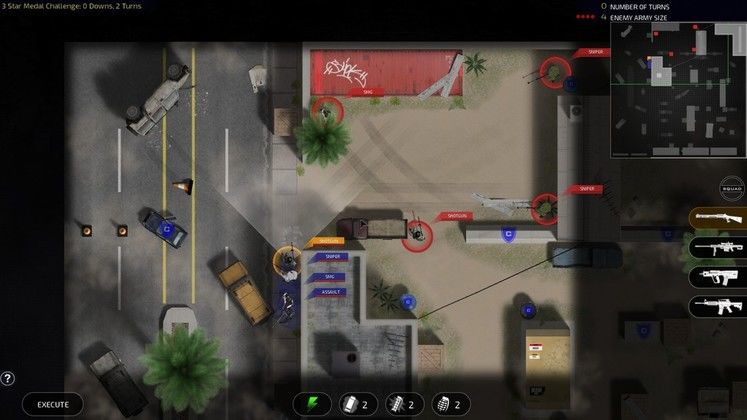 Though extremely powerful, the Shotgun class must be used at close quarters only unless you want to give the opposition an easy kill

Beyond the simplistic trappings of the single-player campaign mode are the online multiplayer shenanigans that will clearly give Special Tactics a real set of legs post-release. Again tapping into a familiarity with Valve’s Counter-Strike, there are two main mission types that players can get into against one another; bomb detonation/defusal and hostage rescue. Where the multiplayer side of things differs from elsewhere in the game is in the fact that you only have a set amount of time to coordinate your team in the planning phase, thus making the whole affair much more tense and engaging than it would otherwise be. Sure enough, while credits can be earned through multiplayer and survival mode play to unlock different cosmetically different firearms, it’s just a shame that there aren’t more modes to get stuck into beyond these; here’s hoping that post release development ups the variety a bit. 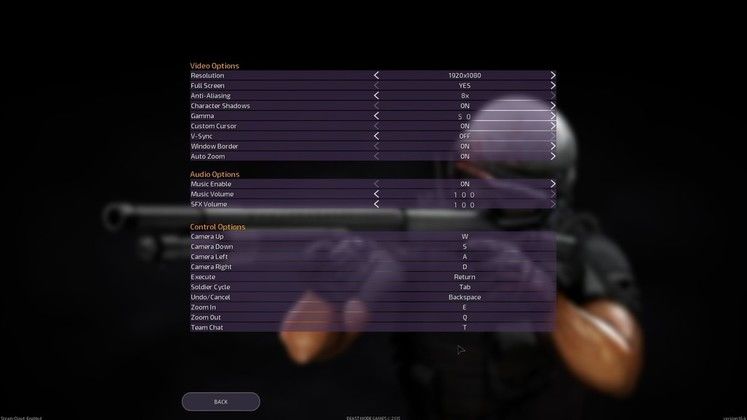 It wouldn’t be unfair to say that Special Tactics somewhat reductive visual style does not afford much opportunity for would-be graphics tinkerers to do their thing. Encompassing a variety of largely static looking top-down 2D maps with nothing in the way of dynamic environment elements such as destructive scenery or interactive areas (taking cover not included), Special Tactics is, from a visual presentation standpoint at least, pretty simplistic. It’s a shame that the maps aren’t larger and include a wider selection of locales too, since Special Tactics engaging turn-based strategy would really shine in scenarios such as foiling a multi-floor embassy siege or enacting a hostage extraction from on board an expensive yacht, for example. 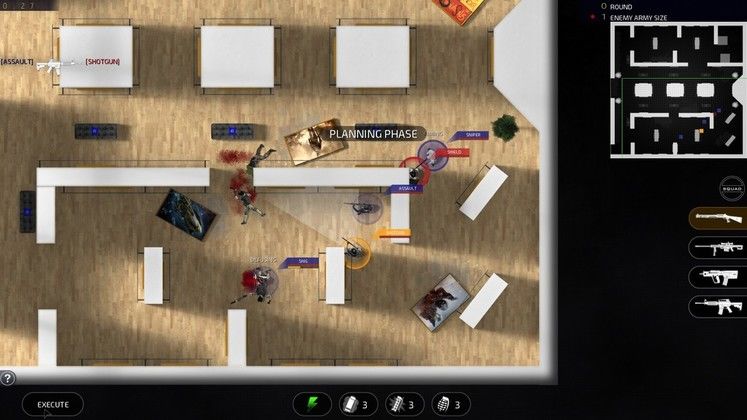 When it comes to visual customisation, there are options to tweak resolution, shadow quality, anti-aliasing and V-sync, but quite honestly there’s nothing really here that will tax your gaming rig in any sort of considerable capacity. Indeed, on my own rig that encompasses a 2.8GHZ i5 CPU, Geforce GTX 670 and 16GB of System RAM, Special Tactics didn’t struggle in the slightest and I wouldn’t expect your rig to do so either unless you haven’t used it in the last ten years. Of course, the upshot of boasting such a very low minimum specification is that just about anybody with any kind of PC will be able to get Special Tactics up and running, thereby removing the technical issue as a barrier for some folks in the process.

Elsewhere, Special Tactics is rather uneven on the sound front. In addition to a total lack of voice acting, the musical score, a typically overly serious mix that you would expect to hear in just about every other counterterrorism game or film ever, does little to inspire the audible senses. Still it’s not all bad news as Special Tactics gets it right when it comes to the guns themselves, and they are a bombastic sounding bunch to say the least. From the sustained thunder of automatic rifle fire, to the violent, singularly ear-ringing explosiveness of the sniper rifle, when things get busy, Special Tactics more than sounds the part. 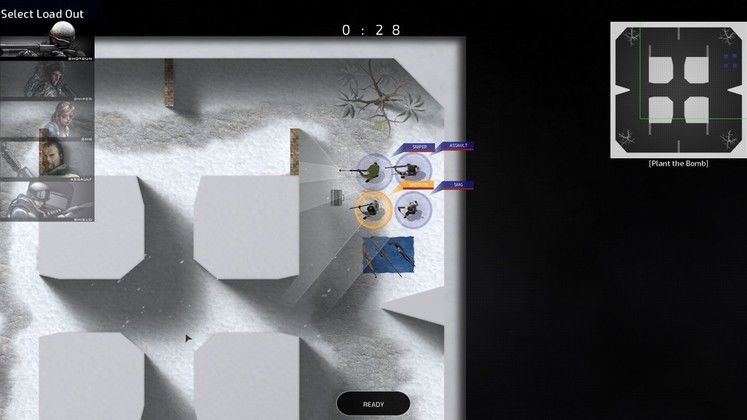 Look, Special Tactics is not going to win any awards for presentation that much is true; satisfyingly meaty bang-bang sounds aside, it can all look quite basic and the narratively threadbare campaign does little to inspire confidence. Push past such cosmetic concerns though and Special Tactics true calibre begins to reveal itself.

Top down tactical shooters are of course nothing new but Special Tactics innovates in a number of ways that its peers do not. The addition of focus points and boosters all help to make Special Tactics feel fresher than its genre stablemates; inviting extra scope for tactics and strategy that just aren’t commonly available. 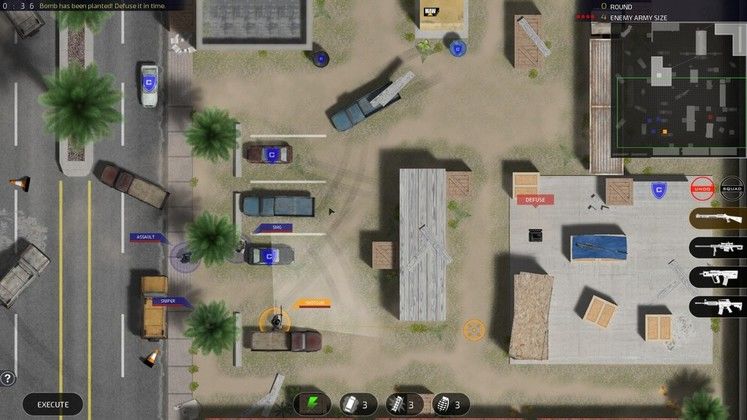 Ultimately while its single-player offering disappoints, Special Tactics proves to be a frequently engaging prospect in online multiplayer. Although limited to a handful of maps and even fewer different modes to choose from, it nevertheless endures with the endlessly tense moments of defending your team as they defuse a bomb, or the paranoia inherent with checking every corner as you lead a hostage to safety. A tactical core beats at the heart of Special Tactics then, it’s just a shame that there wasn’t more content built around it to make it feel truly special.

A top-down, turn-based tactical battler with a solid core and not much content to go around it, Special Tactics has the beginnings of something great that it can’t quite parlay into excellence.

Defending a tense in-progress bomb defusal with your team in perfect defensive formation, mowing down any who come within range. 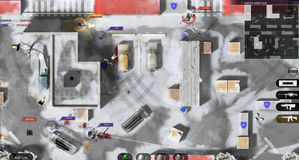