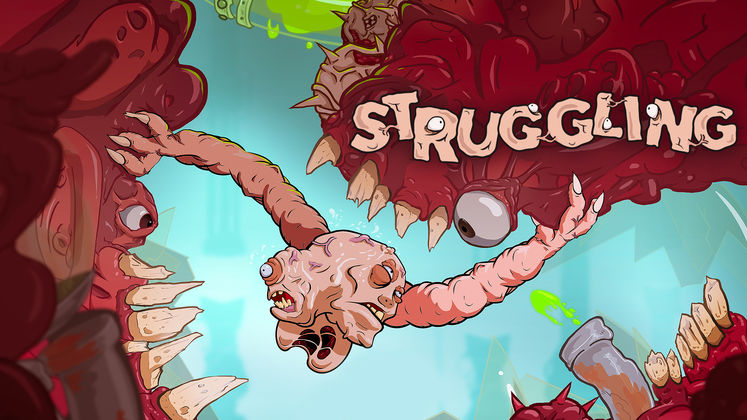 Whenever you tell someone you’re a game reviewer, you usually get one answer: “Oh, that sounds fun!”. That’s not true. Don’t get me wrong, it’s vital work and there’s a lot to talk about. But you don’t become a critic for free games. You become a critic because you love the art form, the potential for experiences impossible in other mediums. It’s weird to start a game review with navel-gazing pretension, but this is a game that reminds me of how critic work isn’t a job you do for the benefits. This brings us to probably the most appropriate game for 2020: a controls-based physics platformer by the name of Struggling.

Are you sure we picked the right guys?

There is a prophecy that says that the brothers Hector and Achilles will save humanity. Sadly, they’ve been reincarnated as a conjoined abomination in a research facility. They’re clearly in pain, repeatedly regenerate, and can only move with their horrendously deformed arms, too long for their body. Thus, it’s up to you (and maybe a friend) to help them learn how to walk and to travel the world to fulfill their prophecy. I don’t believe these sort of games work with a full-on narrative with cutscenes and what have you. Games like CLOP or I Am Bread aren’t telling a story beyond its mechanics. If they do tell a story, it’s straightforward with little background information. This makes Struggling one of the few games that goes into detail with its prompt, and it’s distracting. Especially with the focus on body distortion and Cronenberg-esque monstrosities. 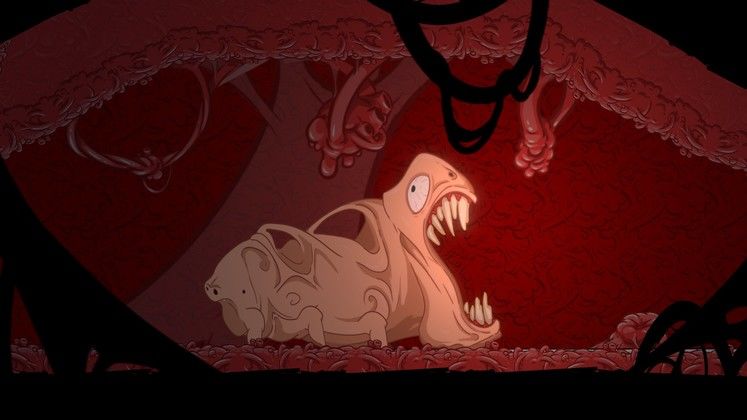 Suffice to say, it’s a bit of a grody game. The game literally starts by a partying scientist vomiting onto a console before slipping to their death (which is less funny than it sounds). Struggling’s grossness is in that 90s Saturday Morning Cartoon way (think Ren and Stimpy/Aaahh!!! Real Monsters). However, that grossness feels toothless. It’s disgusting, but not disgusting enough to get a rise beyond “oh, I don’t like that”. The one nice thing I’ll say about Struggling is that it really nails its tone. You definitely feel deformed, and playing as Hector and Achilles gets how pitiful and brutal it would be to move with two arms and two arms alone. Namely, the sort of groping and crawling that would be necessary to get around the world. While this is the point of the game, it brings a certain concern: it’s not fun.

As you can tell, Struggling’s name is apt and fits in the tradition of intentionally tricky controls. Begging you to play with a controller, each arm is controlled by an analog stick and a shoulder button. This means you’ll need to move by moving your arms and grabbing surfaces to get around the world. You can also shed an arm and regrow another, or just respawn to your previous checkpoint by screaming until you explode. Later on, you even get powers for each brother to solve problems in the world. It’s not very fun, even when you get a better idea of how you move in the world. It’s easy to get tangled into yourself and lose track of which arm you’re controlling. They are color-coordinated, but it can be hard to differentiate between them. 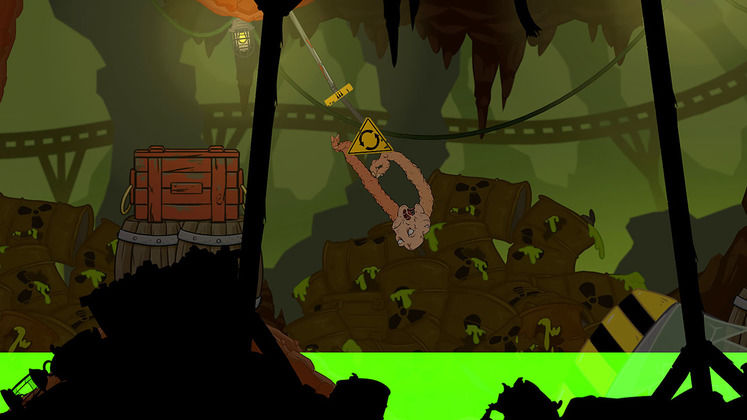 Struggling’s problems are very clear 20 minutes in. At one point, you’ll need to close an elevator door before a monster comes and eats you. This is after you awkwardly figure out how the elevator closes and opens, so now you have to rush back to the elevator and close the door before you respawn and get back to before you used the elevator the first time. It’s a pretty short time limit for something you only just figured out and makes for an unfun challenge. The difficulty gets to a more manageable spot after that scenario, but it sours the experience. Other similar titles make these scenarios pretty funny, like the absurdity of removing a rib cage in Surgeon Simulator or trying to get to the toaster in I Am Bread. That humor isn’t present here, no matter how hard it tries. Struggling isn’t rewarding to get the hang of, just uncomfortable to play.

It’s a game technically made for two players, but I was unable to find someone to join me (it’s a bit hard to invite someone over during a pandemic). I’ll admit this makes it difficult to play the game as intended, but the game itself doesn’t sell me on that ideal of shouldering some of the burden. If I can’t appreciate the controls and potty humor by myself, I don’t think they’ll suddenly become worth it with an extra person. There’s someone who’ll find this a great idea. Obviously, playing with friends is better for most games, but I wouldn’t want to play this with a mate. But if I wanted to deal with the frustrations of miscommunication more than usual, I’d go back to my nonexistent ex-husband. Luckily, Remote Play Together is an option on Steam when the game is officially released for anyone interested in the game. 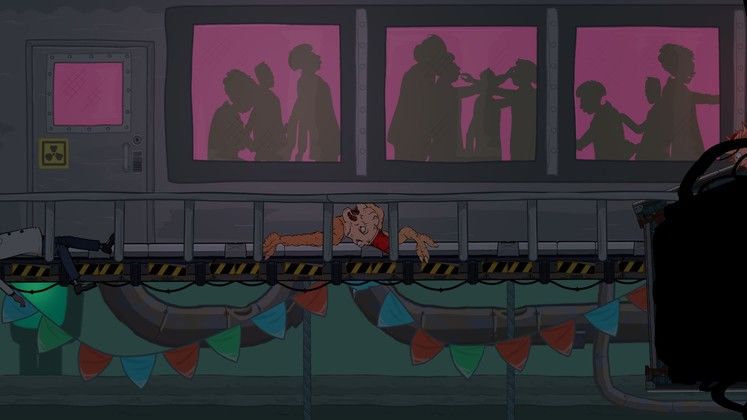 The main question I asked myself while I played Struggling is “why am I doing this?”. I haven’t had a game give such a brutal impression in a long time. It’s not just a tricky game, it’s a difficulty that makes you want to stop. At the very least, it runs fine for what it is, so anyone who likes the idea of playing Struggling won’t deal with stutters of bugs. I didn’t get far in Struggling, I’ll admit that. Every time I tried to boot it up, I wanted to play something else 5 minutes in. It’s like an endurance test, and one that left me in a bad mood. There are some puzzles and challenges that fit with the controls, but it never makes wrestling with the controls rewarding. I’ll accept the criticisms that I didn’t give it much of a chance, or that I just need to “get good”. But an intentionally annoying game is still annoying, and I’d rather use what little time I have on Earth on something worthwhile.

Struggling is now available on Steam and the Nintendo eShop for $14.99.

It’s been awhile since a game repulsed me. Not in a gruesome or transgressive way, just in a way that’s unenjoyable thanks to frustrating controls and its unfunny execution. Don’t get me wrong, it’s clear in its intent and you’ll know how you feel about it early on. However, it’s very unappealing and is a reminder as to why these sorts of games are better as experiments rather than full releases. If you like overcoming frustration, maybe you’ll find something worthwhile. I don’t.

The rat swarm near the start felt like a fair challenge. 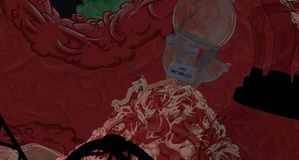 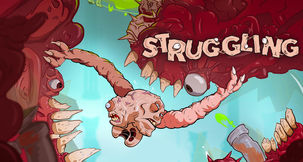