Just what the world needed, a sequel to Mars: War Logs!

I’ve played a lot of games in my time, but rarely have I encountered games where I honestly felt my life slipping away as I played them. Games where I’d literally be rather be doing anything else other than continue the miserable pointless trek through events where nothing seems to matter and no part of it gives any enjoyment. The Technomancer from Spiders and Focus Interactive is such a game. It’s not an extraordinarily bad game, merely a game where I cannot think of any reason anyone would want to play it over any other game in existence. And this is just the first paragraph of the review.

Despite the best efforts of Focus Interactive to make us forget that game existed, The Technomancer is a semi-sequel to Spiders’ last RPG Mars: War Logs, a game I also reviewed and rather charitably called “a fairly interesting action RPG with a cheap price on its side, but in all honesty it could do with being even cheaper”. I also mentioned the key problems of “the repetitiveness of the environment, the uselessness of Roy’s otherwise interesting companions, the regularly frustrating combat, and the mostly poor writing and acting”. I did however praise the setup and world the team had created, so The Technomancer was Spiders’ chance to redeem themselves and create a more compelling game around it. Oh dear.

You play Zachariah Mancer, and you have no choice about it. Seriously, you start the character creator and the first thing you notice is that there’s no option for “female”. Just an assortment of random ugly dudes. I’d rather have a decently designed character than an absolutely basic to a pointless degree character creator. Anyway, Zachariah is a Technomancer, lightning wizard of Mars, and when you say it like that it sounds pretty awesome. Unfortunately they’re basically slaves of the Abundance army, rooting out any hint of insurrection and not allowing much free will to spread during their war against the other big corporation of Aurora. Through no fault of his own Zachariah will incur the wrath of Abundance, and other things happen you won’t care about too. 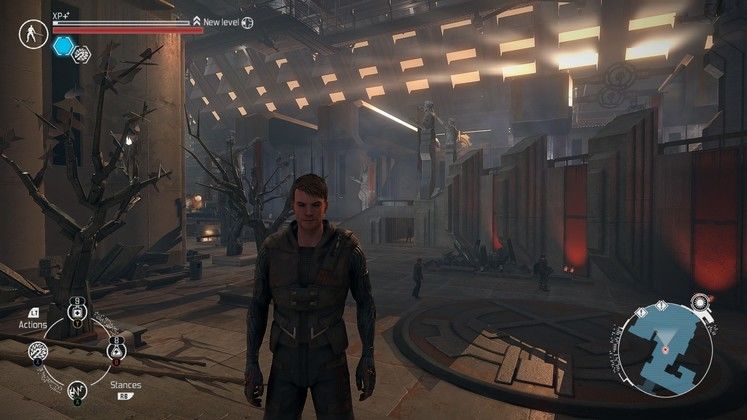 Hi, I'm Zach Mancer and this is my game!

In classic 3D RPG style, there are two forms of gameplay: exploration and combat. I’m going to be brutally honest here: both suck. That’s not very critical of me I realize, but just know I had equal amounts of fun exploring the world as I did fighting enemies: very little.

Technomancer’s Mars is very like other RPG-lites from Focus, such as Bound By Flame and precursor Mars: War Logs. It looks pretty enough in screenshots but start playing and you discover the world is just a series of confusing narrow corridors with very little to interact with. 90% of the NPCs can’t be interacted with and don’t offer even a cursory “hello” or “slag off”. Aside from occasional unsubtle blue item boxes and the odd enemy or salesperson there would be nothing to interact with in the entire world. There is no point exploring in The Technomancer because everything of relevance is shown on the map and there’s very little to be gained by scavenging items because the benefits are minimal, other than manually getting Serum off every single person you defeat. Why couldn’t this be done automatically?!

Missions are given by the few people in the game who are allowed to have a voice, and I admit there are a good range of mission types and they’re mostly okay. While there is often fighting involved characters can be reasoned with and if you have the right skills there’s the chance to avoid violence. Not much chance admittedly, but it’s there. Unfortunately while the types of missions are good they’re made frustrating by almost all of them requiring backtracking over the entire length of the map, through at least one loading screen. This is length-padding in the extreme and turns the whole game into a pitiful slog, especially with the maze-like area design. I was just relying on my map overlay to get around for 85% of the time. 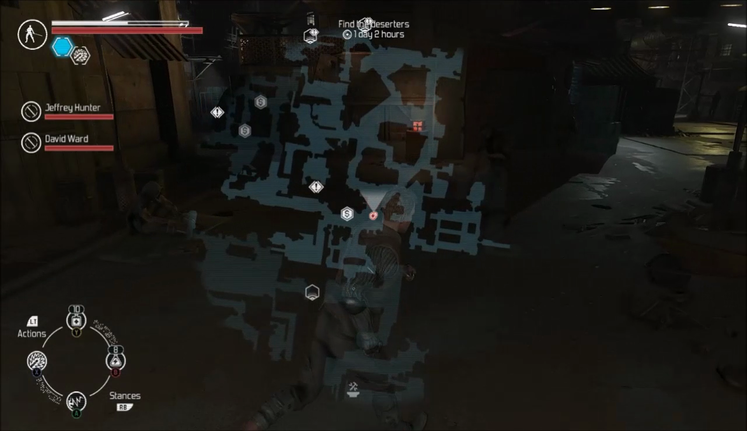 The Technomancer in a nutshell

Then we have the combat, which is just bad. Seriously. It really hasn’t evolved at all since Mars: War Logs. There’s Attack, Dodge, and Disrupt buttons along with an unimpressive area attack and Technomancer powers such as the default weedy lightning attack that does basically no damage. My main problems with the main actions: Attack regularly fails to connect, enemies can still hit you when you Dodge, and Disrupt often just won’t disrupt anything. Enemies will always be able to hit you but you regularly won’t be able to hit them, and even the weediest enemy hits harder than Zachariah Mancer does. You’ll die a lot more than you’ll enjoy yourself, and once again your companions do little more than distract opponents.

The controls don’t help matters. Whether you’re playing on keyboard or gamepad, “cluttered” is the word. I went with an Xbox pad because the button-mashing combat seemed more suited to it, but it wasn’t more user-friendly. RB opens the unnecessarily important Stance menu, LB opens a confusing sub-menu where you can assign powers and items to your actions menu (which has several pages). These are then activated by holding Left Trigger and pressing the face button you’ve assigned it to, meaning that if you’ve got more than two Technomancer Powers you’ll have to give up easy access to health items or the impossibly useful traps. I was regularly fumbling through controls even out of combat. 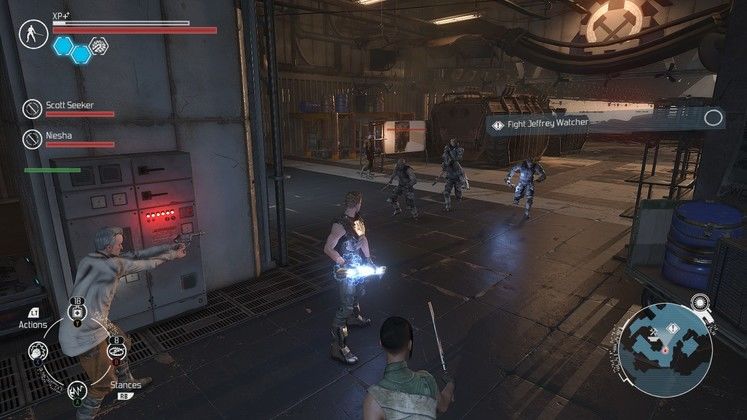 That sounds about right, and certainly the game doesn’t look too shabby. Certainly nicer than Mars: War Logs but still a long way to go before being considered “attractive” especially since most areas look the same. Character lip-syncing is awful, walking NPCs vanish into doors like ghosts (even ones that can be opened), and no real designs, whether enemies, characters, or locations, stand out in any way. It’s still budget graphics, basically.

That said, there are two really annoying technical issues. The first is irritatingly long load times, which considering you’ll face at least two every quest you go on soon grates on the nerves. The other is the frankly horrifying 30 FPS frame limit that’s been imposed. I have no idea why this is the case, and for a PC game with such low specs to have such a backwards frame limit in this day and age is criminal. No wonder the combat feels so slow and unexciting. 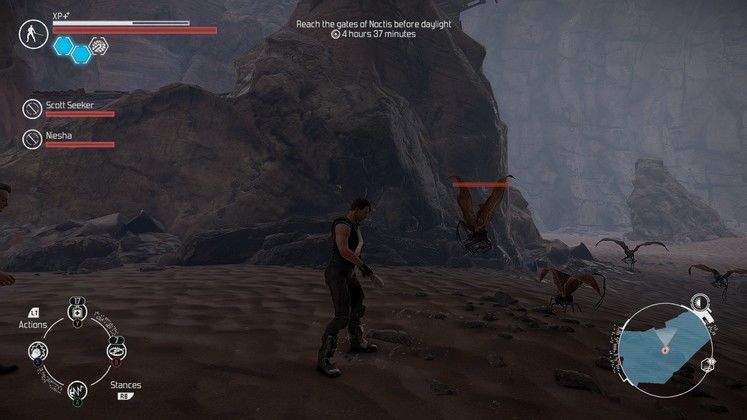 On the audio side, the voice acting never reaches ear-piercingly terrible levels but at the same time it’s profoundly mediocre (which sums up the whole game really). Actors fail to show any charisma, even when choosing the “Charisma” dialogue option. In fact emotions seem entirely beyond their capabilities. Other than that sound effects are generic and the music is okay I guess, but I can’t say I ever noticed it.

If I was to offer any praise to The Technomancer, it’s that the world Spiders have created is actually quite interesting. I liked it in Mars: War Logs too. The idea is a good one, a populated Mars with major corporations fighting a pointless war, lightning monk wizards keeping the peace, and water being so valuable money isn’t even considered as payment. In the War Logs review I said I hoped Spiders would make a better RPG of the idea, perhaps focused around the Technomancers. Well, they made a Technomancer RPG as suggested, but not a better one. They have attempted to make it a little Deus Ex-like, where doing one mission can make characters appear later or have different opinions towards you, but unless you care about those characters or what’s going on it doesn’t matter.

I’m mostly down on The Technomancer because of two reasons: firstly that the advertisements have been grossly misleading, seemingly promising something Mass Effect-like, and secondly because Spiders have learned no lessons at all from Mars: War Logs other than giving it a better title. The Technomancer plays nearly the same and as such is grossly mediocre, except now as a bonus it is overpriced and hideously disappointing too. 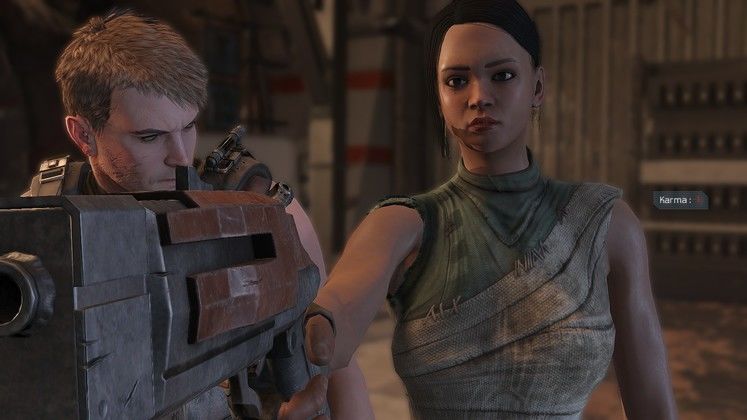 Normally when a reviewer says “if you liked the previous game in the series, you’ll like this” it’s a compliment. With The Technomancer, it’s a threat. Spiders has simply made a slightly nicer looking version of Mars: War Logs. This including frustrating combat where Attacks don’t seem to connect and Dodges don’t seem to dodge, maze-like areas made entirely of corridors filled with non-speaking NPCs and not much to interact with, useless companions, bland emotionless characters and a story that expects you to care even though it hasn’t given you any reason to. I appreciate the interesting world and the attempts to add a bit of choice-and-consequence to the missions, but neither make things any more enjoyable. The Technomancer is not grossly bad, but it feels cheap and is deeply mediocre. It’s a cheap game, and worse: it’s no longer a cheap price. As I said in the first paragraph, I can’t think of a reason anyone would want to buy it over any other game in existence.

Discovering a character you saved earlier is now a useful ally. Doesn’t make much difference though 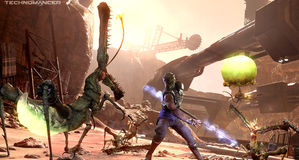