Don the suit, grab the gun and get ready to forge a crime empire on behalf of Michael Corleone

Bada-bing-bada-boom. EA are back with an offer you can’t refuse, (or maybe you should), - The Godfather 2. With the clichés out of the way, we can crack on with EA Redwood’s interpretation of Coppola’s crime opus. Horse’s heads aren’t obligatory. The follow-up game to 2006’s tie-in returns on Xbox 360, PS3 and PC. We’ve got our hands on the PC version to see if it has what it takes to join the family (last cliché, we promise).

You play as Dominic, the latest Don to be brought under Michael Corleone’s wing. It’s your job to slot into the film’s chronology and go from nobody to somebody. This means taking over businesses through extortion, bombing rival families and doing favours for what seems like the whole of New York / Florida / Cuba.


The game merges traditional third person action with pseudo strategy elements. The majority of your time will be spent following the orders of Michael, Hyman Roth, Frank Pentangeli and Tom Hagen, (Robert Duvall returns to lend his voice at presumed great expense). This means utilising the ‘Don’s View,’ a strategy map that shows your businesses, crime rings and rackets. At any given time you can attempt to take over other family’s businesses. You simply walk up to their entrance, and get shooting.

Thankfully, taking on twenty armed guards, (the Don’s View shows such information), isn’t asked of you alone. You get to take along three of your own family members. Each has their respective professions and advantages. In the beginning, it means you have to choose from a pool of people, (safecracker, medic or an electrician are some of the highlights). As you progress through the game, you can upgrade your soldiers to capos, allowing them to learn a new talent. Then you finally get an underboss, an uber teammate who knows three tricks of the trade (bruiser for breaking down doors, arsonist for burning buildings, or demolitions for blowing stuff up). Halfway through the game you have a ‘squad’ that has the six skills on offer, therefore preventing any need to tactically select your team.

Each member, (and Dominic), can be upgraded with the cash you earn from your businesses, doing favours or robbing banks. The weapons follow the same process. You’ve got your usual assortment of pistols, rifles and shotguns of varying levels. Your family members will have to have the right weapons licence to use the best gear, otherwise you’ll have to take him online to get honour or mark him for death (and subsequently hire a better guy). Even when your men are underdeveloped, they still have no trouble wiping out the enemy goons. This makes the game tedious as it requires as much skill as brushing your teeth.


It isn’t helped by the repetitive nature of ‘business.’ You enter a building, kill everyone in it, beat the owner until he submits and then hire guards to protect it from your rivals. The interrogation system is ‘dynamic,’ (rub a guy up against a wall / break some of his stock / lean him over a ledge), but the easiest way to get him to relent is to punch him a couple times in the face. Occasionally you’ll have to defend your own turf, but you can send your spare made men to intercept the attackers. They never seem to fail and the enemy rarely bombs your buildings. As a result, you fly from business to business becoming stronger and stronger while the enemy AI comes off as stupider and stupider.

It’s more difficult to have trouble with the game than it is the game causing you trouble. The learning curve is lessened by informative videos. The game eases you into crime ring bonuses (like bulletproof vests, increased income and brass knuckles), extortion, made-men hits and using the Don’s view. Once you’ve taken over a family’s businesses, it’s a final onslaught on their compound. Blow it up, (following the traditional kill everyone inside), and they’re gone for good.

At regular intervals you’ll be interrupted by story elements which have you playing out the film’s more memorable moments. The game takes some liberties, but it is forgiven when making an interactive version. Cut scenes, simple dialogue trees and underwhelming performances lack the film’s feel. The actors could have made a bit more of an effort, something that isn’t helped by the repetitive animations / stiff movement. There are some genuinely amusing quips from your colleagues as you drive around, but there’s definitely a distinct lack of flair.

Yet, you keep on playing. Despite the repetitive combat, shoddy vehicle handling and pointless stealth system, there’s something mildly addictive about expanding your crime empire. It’s brainless, yet oddly entertaining – the violent executions never-ever-get-old.


The graphics aren’t to GTAIV’s standard, with the streets often lacking in life, textures bland and oddities aplenty, but you overlook it. The iconic score returns (a big plus) and the sound work is of a high standard. It runs stable and at a high FPS even on the max-settings.

A couple more months of polish would have resulted in a much better game. If you liked the original, (there are a few of you out there), then you’ll love this. If you’ve been given it as a gift, we can think of worse games to have to play. If you’re a fan of the films / blockbuster AAA titles, then stay away. Multiplayer ties into your single player campaign and can offer a couple hours entertainment, though it is unlikely to draw you away from bigger titles. Put simply, The Godfather II could have been better, but it also could have been a lot worse.

A couple more months of polish would have resulted in a much better game. If you liked the original, (there are a few of you out there), then you’ll love this. If you’ve been given it as a gift, we can think of worse games to have to play. If you’re a fan of the films / blockbuster AAA titles, then stay away. Multiplayer ties into your single player campaign and can offer a couple hours entertainment, though it is unlikely to draw you away from bigger titles. Put simply, The Godfather II could have been better, but it also could have been a lot worse.

Shoving a shotgun in someone’s mouth and watching it go boom. 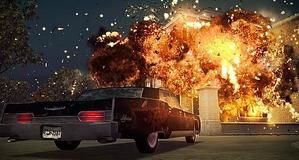