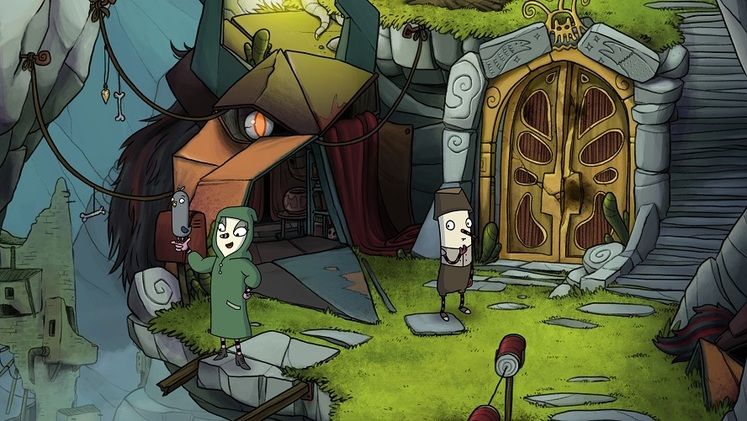 We are fairly far removed from the days when point-and-click adventure ruled the gaming market. Many of us who grew up loving games in the ‘80s and early ‘90s can think of more than a handful of days and nights spent checking our scavenged inventory against every object in the environment in order to advance the story and leave no stone unturned. That said, point-and-clicks still have a thing or two to offer in this day and age. Consider The Inner World – The Last Wind Monk from Studio Fizbin, Headup Games, and Kalypso Media. This charming adventure doesn’t just tell a pretty good story. It takes knowledge of previous concepts in point-and-click and blends it with clever and humorous writing to offer a game that is accessible to players of any gaming generation.

The story takes place in Asposia, a world sitting nestled at the core of a hollowed out cavern. In this world, tunnels in the outer crust known as wind fountains bring air for the Asposians to breathe by way of special instrument-nosed individuals known as flute noses. However, when the previous leader of Asposia is seemingly assassinated and the culprit appears to be flute noses, the hateful Emil steps up to seize control, condemn the flute noses, and attempt to gather and eradicate them from society. It’s up to the timid and reluctant Robert, his pal and brash anarchist Laura, and her pet pigeon Peck to rescue the flute noses, stop Emil, and save their world from suffocation by discrimination. Along the way, they’ll run into friends, enemies, old acquaintances, and a ton of adventure interlaced with clever puzzles and a caustic sense of humor. 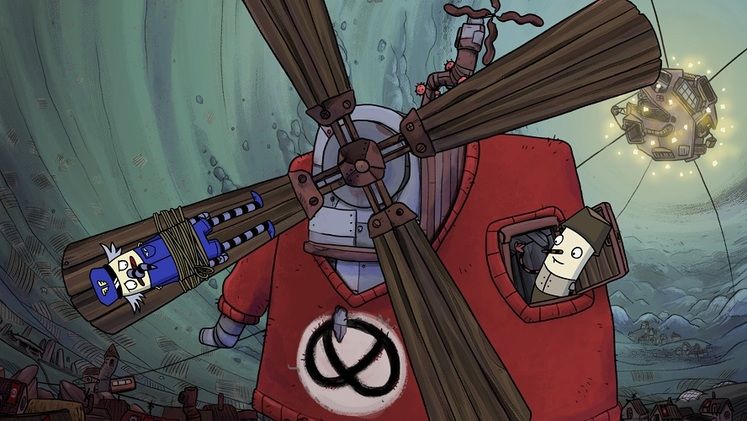 The Inner World – The Last Wind Monk is actually the second game in the series, coming in very shortly after the events of its predecessor, but don’t worry if you haven’t taken the journey in the original The Inner World. The Last Wind Monk summarizes and gets players up to speed nicely with everything they’ll need to understand what’s going on. There are a lot of callbacks to the first game and people who have played it will enjoy seeing returning characters and references to the events and journeys that took place before, but the game does a good job of making sure new players are on the same page without going into horribly long-winded exposition.

Just as important is how The Last Wind Monk plays. It is, at its core, your standard point-and-click adventure foundation, which revolves around guiding Robert, Laura, and Peck through environments, investigating interesting points, collecting meaningful items, and speaking to characters present to get clues or advance the story. Uniquely, players occasionally have access to more than one of the protagonists and it makes for interestingly diverse engagement to the world. Robert and Laura have very different ways of speaking to people and their difference in dialogue is enjoyably diverse. Moreover, while Robert is capable of playing music on his nose to interact with some puzzles, Laura is sort of the muscle and can interact with puzzles requiring heavy lifting. Meanwhile Peck can, of course, fly and reach engagement points and items out of the reach of his friends. It makes for an interesting, yet not unwieldy puzzle-solving mechanic, especially when you’ve got access to all three of them. 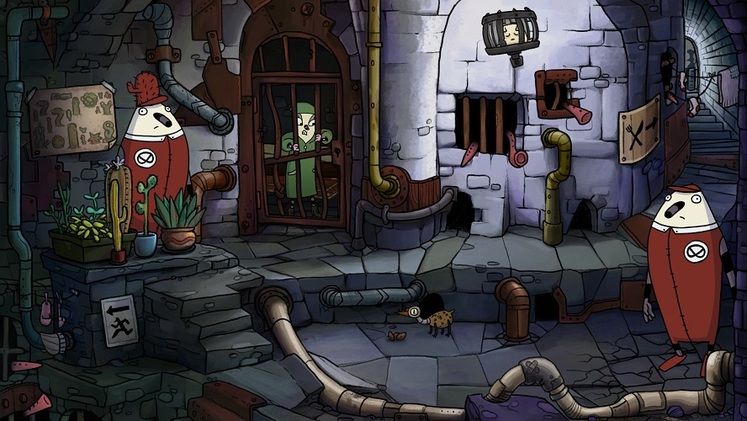 One thing The Last Wind Monk does especially well in is handling or all-out eliminating the baggage often associated with point-and-click games. In the old days, when you didn’t know where to go next, you were simply deadlocked until you could figure it out. The Last Wind Monk is filled with features that promote accessibility and flow without forcing the answer upon the player. For one, holding down on the clicker immediately shows every intractable object, exit, and character in the environment, taking out the guess work of what actually does anything.

Perhaps the most important time saver and frustration killer in the game is an incredibly comprehensive hint system. At any point of control in the game, you can open up a menu that reminds you of your current objectives. Checking a specific objective offers another menu where you can reveal clues to moving forward. The clues are obscured until you activate them one at a time and you can use as many or as few as you want. Moreover, they run from extremely vague at the first, lending a little something you might not have thought of otherwise, to all-out hand holding, essentially giving you the direct answer if you simply cannot or do not want to discover it on your own. The ability to rely on this system as little or as much as you want is akin to actually setting the difficulty of the game for yourself, applying to hardcore point-and-clickers who want to do it all on their own, more casual fans who just want the story, and everyone in between as necessary. 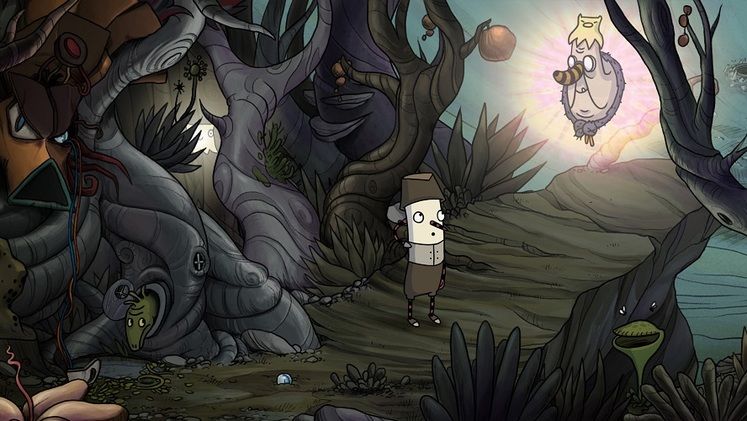 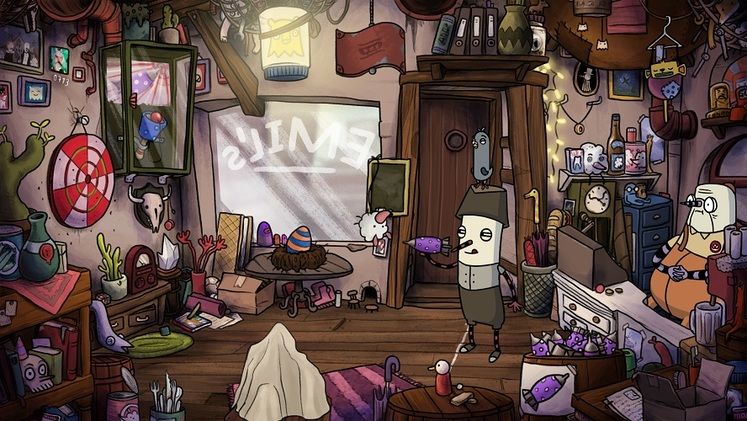 The Inner World – The Last Wind Monk does not require much to run on nearly any system. It’s a much more stylistic than demanding game and Studio Fizbin does a fairly great job of building a cool world with imaginative characters who are all voiced pretty well. That said, the animations are occasionally the weakest part of the game. Characters will stand in idle positions, staring off into space or looking around in the middle of a conversation, or simply use some standard movements in places where they look somewhat awkward. For as much life as there is in the dialogue and world around these characters, it would have been nice to see a little more animation in them to match. That said, Asposia is still a very pretty world and there’s little to no technical issues roughing up the overall journey or engagement with the story.

It’s interesting that The Inner World – The Last Wind Monk comes out at the time it does. The game has a lot to say about things like discrimination, acceptance, purpose, and willful ignorance and goes about it in humorous and sometimes surprisingly deep ways. It has everything a good point-and-click should have from meaningful world engagement and enjoyable dialogue to good, old-fashioned, item-heavy puzzle solving. That said, it’s clearly a journey that Studio Fizbin isn’t out to bar anyone from for the sake of nostalgic difficulty. Their adaption of point-and-click mechanics to modern times with things like the hint system ensures that the only thing keeping a player from moving forward at any point is their own stubborn resolve. It could have better character animations at times to go with all of the solid and wonderful things built visually, aurally, and mechanically around these characters. However for the most part, The Inner World – The Last Wind Monk makes a strong case that point-and-click adventures still have a lot to offer in modern gaming.

Helping magical ponies rediscover their self worth was easily one of our favorite interactions in the game. 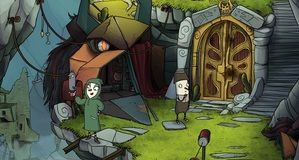