There are games that we, as reviewers, do not want to criticize. Games that try so hard, that attempt something new, that are so earnest in their desire to make an epic and enduring game that it’s disheartening to admit that they failed. It’s upsetting to review them because we want them to be good, but they just aren’t.

On the other hand then we have the games that still do all that but we want to tear them limb from limb because they do every single thing badly, screw up every moment, and make every excruciating second we had to review them more painful than we can bear.

Welcome to The Long Journey Home, a game that tries very hard but only succeeded in making me think developer Daedalic Studio West deliberately made the game so obtuse, convoluted, painful and un-fun as part of some wild, baffling experiment.

The idea behind The Long Journey Home is that you’re controlling a ship and its four occupants who were testing a faster-than-light warp drive when something goes wrong and they’re thrown to the other side of the galaxy. Slowly and surely they have to make the journey home (a long one I believe), but since they don’t have the fuel to get straight back they have to mine minerals, make contact with alien races, fight in or avoid skirmishes, and generally work out a way to get what they need and make it back to Earth. 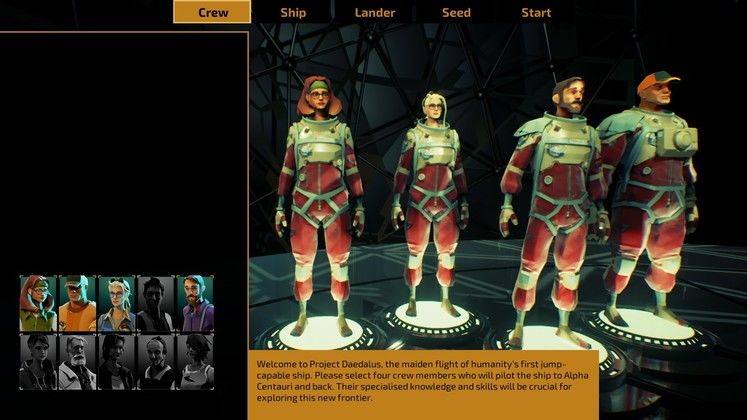 All of which is an excellent idea for a videogame, if done right. Unfortunately as mentioned Daedalic have failed to do so. From the very first screen we realized something was off. You have to choose 4 crewmembers out of a total of 10, and each brings different skills and perks to the mission. Which would be fine, except that Daedalic have refused to streamline anything. At this point you want to get on with the game, but there’s no “Siobhan Hartigan, PERKS = Good at studying planets, CONS = Not a scientist” or anything that simple, instead you have to read a few vague paragraphs of a bio and have to guess what each crew member would bring to the team.

The whole game is like this. Instead of just letting you get on and have fun with their nice idea Daedalic put up roadblocks at every moment so you’re struggling with the most inane or basic moments when you want to focus on the game. And this is just the first screen. Choosing your ship and landing craft are a little better but then just throwing vague stats at you that make no sense at the moment don’t help your enjoyment. And why can’t we customize our ship or lander? I had to choose a ship with seemingly the most acceptable stats but looked utterly ugly. And honest to god, I was stuck for five minutes on the screen where you name your ship. 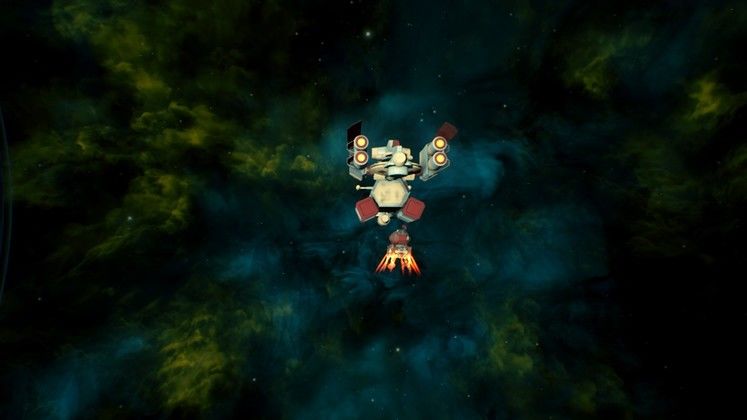 And, finally, we get to the game itself already utterly ticked off but certain that things can only get better. Yeah, no we’re lying, we knew this would just be a preview of the stupidity to come. There are three basic gameplay modes in The Long Journey Home: ship flying, lander steering, and dialogue scenes (either between aliens, your ship or your crew). The entire game comprises these three. You alternate between them as you fly your ship, land on a planet, and either do things aboard your ship or make contact with alien vessels. And none of them work, or at least are not made by anyone who’s ever played a videogame. I repeat: there are three basic things you do in The Long Journey Home and none of them work.

Ship flying is a mixture of boring and frustrating. You steer your vessel around solar systems by pressing left mouse button to thrust, right to boost (which burns up fuel faster), and steer with the mouse (keyboard and gamepad support is offered too, incidentally). So far this is fine, nice and simple, except Daedalic thought it would be realistic to add gravity to turn a simple control system into an excruciatingly complicated one. So your ship is always moving, you can’t ever stop, there are no straight direct paths just curved orbits, and to reach planets you have to perfectly curve your path and slow your speed (without changing your path, which is nearly impossible) so to enter their orbit. If you miss your objective, which is easy to do, you have to spend a load of fuel steering in a big wide arc to get back and try again. With the 2D view, exceptionally poor map and narrow field of vision most likely you’ll smack into a planet and/or star. And don’t even get me started on trying to catch a spaceship. 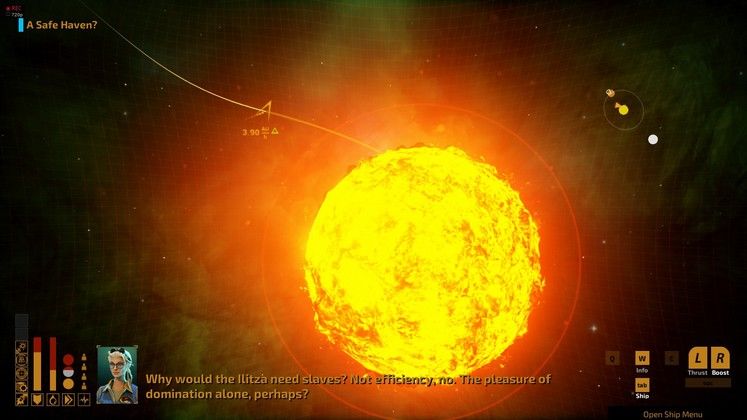 The lander is, somehow, even worse. At least it’s possible to do ship flying, no matter how frustrating it is. We have never once successfully landed on a planet despite many attempts because the controls are just so bad. Once again they’re deceptively simple: left mouse button for down thrusters, right for up, and (attempt to) steer with the mouse. Unfortunately the lander handles like a brick with a monkey at the controls. The thrusters are incredibly weedy and often will not slow your descent even at full power, which is their whole point. After that steering is impossible as the lander will flip all over the place then most likely crash into the landscape and drag itself across the ground like a turtle with a rocket up its arse. I have no idea who thought this was acceptable.

The third part of gameplay, the in-ship and chat screens, are the only parts of this game that work and they’re still stupid. It’s divided into seven areas. Com (where you talk to aliens), Database (all info and missions), Bridge (monitor ship systems), Lander (for maintaining the irritating lander), Resources, Quarters (for checking on the crew), and Lab (for examining artifacts). The Database is just a list and doesn’t give any further information. It’s difficult to work out how the Lab works, in fact I’m not sure I ever did. 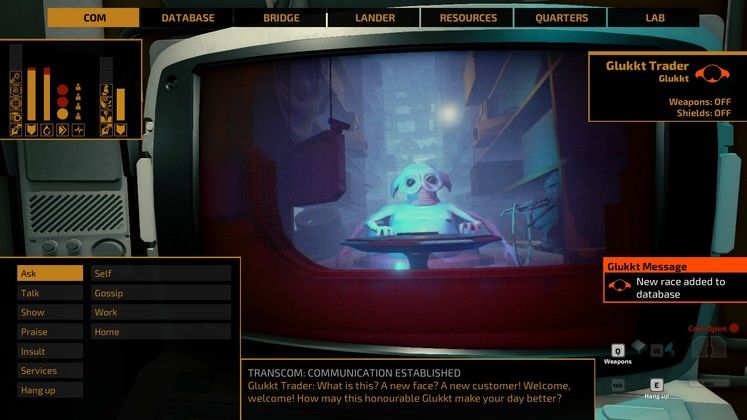 And Com? Well that seems to work fine, except for when we met our first alien, a trader, and were given about 50 different chat options but were not told that if we asked more than 2 he would fly away and not trade with us. We asked “who are you” and “where is your homeworld” and then he left. Why give us so many chat options if we’re not allowed to ask them?

Quite low specs there, we’re certain anyone who wants to can play The Long Journey Home. It’s certainly not a system taxing game, with the majority of the game played in a 2D view with the exception of cutscenes. However we had a system way, way above these specs and we were surprised by slowdown on full settings, particularly during chats with aliens. Loading was surprisingly long too. Still, it all looks quite nice, with cool alien designs and a nice aesthetic. Shame the ships all look terrible, but that’s Earth for you. 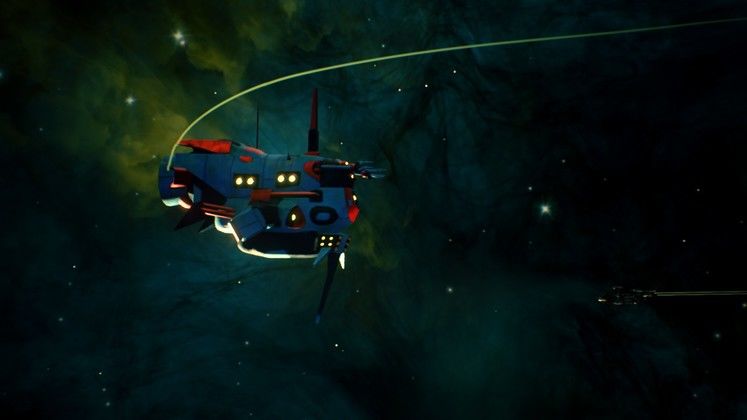 The description for The Long Journey Home sounds so exciting, talking about an endless open universe to explore with full freedom on how to pursue your objectives. But Daedalic just don’t allow the player to get anywhere near the good stuff they’re describing. We don’t mind having to survive in an unforgiving universe by making trade deals, fighting battles, talking to other races, scavenging for resources, that all sounds rather cool material for a game. But when just moving is tedious, frustrating and makes you want to quit the game instantly what’s the point?

But what actually disappointed me about The Long Journey Home was the characters. There are occasional comments about the ship or missions but for the most part characters don’t seem to interact and so often don’t feel like they’re adding any personality to the mission. You can’t directly talk to any of them, nor can they talk to aliens – who, incidentally, they’re not at all surprised to meet. You also can’t upgrade any of them or really manage them. If you’re going to make a big epic space adventure you need to make the crew interesting. Mass Effect had tons to do but in the end most people just wanted to talk to Mordin on the Normandy. 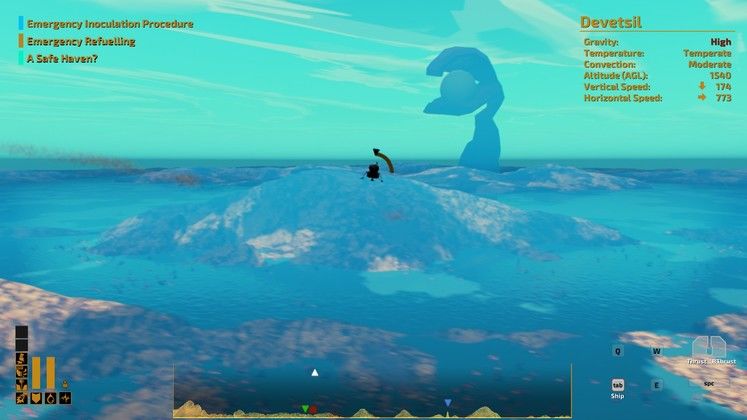 The Long Journey Home is available from Green Man Gaming although as we write this it doesn’t have a price on GMG or Steam.

The Long Journey Home had so much promise but Daedalic forgot to make it playable. They focused on the big picture, on the huge epic universe, without realizing that it’s the small stuff that’s important. We like the look, the ideas, just not the implementation of any of it. Movement in space is frustrating and imprecise with the narrow field of vision and pathetic map ensuring that it’s when, not if, you’ll crash into the sun. Info screens don’t contain enough info. Characters are just lacking personality and don’t impact the mission in any way. And the planet lander is just broken.

If you look at the bigger picture The Long Journey Home seems like it has a lot to offer, but it screws up the basic gameplay so badly you won’t get to see any of it. Tough survival games are fine, but the one thing you shouldn’t be fighting against are the basic controls. Just playing this game feels wrong. Next time Daedalic, start with how the game actually plays and making that fun, or at least not impossibly frustrating, and go from there. Everyone else: avoid The Long Journey Home.

Managing to land on a planet without blowing up, killing one of your four crew members, or wasting all your fuel. 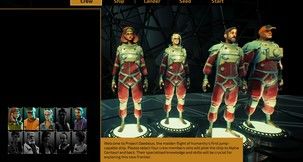