David Brown is out for justice, marked for death and above the law

“L’enfer, c’est les autres,” Jean-Paul Sartre once famously said. Hell is other people. A man out of his time, was old JP. See, what he should have said, and what would have been more accurate, is “L’enfer, c’est les autres joueurs”. For the astute among you, that means “Hell is other players”. For today we stand in the midst of a review of a competitive multiplayer and that, ladies and gentlemen, is where true hell lies.

For someone like your reviewer, anyway. Your humble scribe doesn’t take kindly to what he might deem unfair defeat by people who seem to possess the ability to not take damage when shot. Of course, there are wild allegations of cheating bandied around, even though clearly they’re not true. This guy’s just good, he knows his stuff. But why does he seem to do more damage? Why does shooting him in the back not kill him when it kills others? And why does he just turn around and wipe you out with merely a glance? It’s so frustrating! Arrrgh! Ragequit and **** this game, I’m never playing it again.


That’s multiplayer gaming for people who think they’re decent enough to deserve an upper mid-table placing on the scoreboard. It’s fine for the incompetents out there to not be bothered about finishing rock bottom, just competing is enough for them. The best of the best, they mop everyone up without seemingly even trying. But us, the middling skilled … we suffer. We rage, we thrash, we practice, we occasionally have runs of good fortune, but it always comes down to “**** this ****, I’m not going to play anymore” in the end.

And The Showdown Effect does nothing to change that, despite being perfectly acceptable in all its mechanics, choices, options, and gameplay, whatever. There’s nowt to complain about really, everything is in its place and working. And yet the score isn’t higher. Why? Read on, of course, and all shall be revealed.

First, let’s discuss the premise. It’s a 2.5D competitive shooter. You run around as one of a select band of characters, three available at first and others unlocked as you go, blasting other players. And that’s it. Simplicity itself. You get rifles, assault weapons, rocket launchers, knives, Uzis, pistols and a variety of melee weapons to wield. You get to do unarmed attacks sometimes. You get to rugby tackle people, slide around, pick up bits of environment, use special abilities (one per character) and generally do lots of things you’d expect to be able to do over the course of the four included levels.

It’s all fluid stuff. Leaping about is easy, wall-climbing, swinging on ledges, dodging away from chasing enemies. It’s almost the definition of pick up and play, which is handy as there’s no tutorial barring a ‘training’ mode and a few screens of ‘press this to do this’, but it’s published by Paradox and they generally eschew tutorials in all their games, no matter who develops them. As mentioned though, it matters little as it is easy enough to get to grips with the basics. Jot down a few of the less used keys for future use and you’re set.

It’s fairly cheap as well, so picking it up and finding it’s not your cup of tea? That’s not so bad. You’ve not been unduly affected by it. All in all, it sounds like a reasonably good addition to your collection, yes?

Well, yes, but that doesn’t stop it being hugely frustrating and it’s not even the fault of the game that this is so. It’s the fault of the other players. They ruin it. Now, your scribe played a decent number of matches before writing this piece. At first, things were going well. The game had only just come out, people were learning the ropes. Things were even, competition was good. Then the game just didn’t work, for some reason.

A reinstallation followed, but by that time other people had learned more, had practiced a lot. So the next time a window was found to play, ‘that’ time had arrived. People had moved beyond your reviewer so much that most servers were populated by elite players slaughtering everyone else at will. You could see the effect it was having. People would come in, get biffed around the head a few times without reply and then disconnect.


For a game like The Showdown Effect, player numbers are crucial. You need new players always coming in to make sure competition is always there, that everyone feels they can do well. Sadly, it’s not high profile, despite being made by the guys behind Magicka, so what you have is an elite set driving away new players and then, you’d imagine, bemoaning the fact nobody’s playing the game.

This is an accusation you could level at any competitive title, but the bigger ones have that new or lesser skilled user base outnumbering the elite, so there’s a good chance you can find a server to match your ability. Such is not the case here and it’s a huge problem for smaller games out there. Your reviewer is reminded of Lead and Gold from Fatshark, as just one example. The same thing happened, the elite just played and played and played, getting so good and so versed in the maps that new players didn’t have a hope in hell of competing. It’s faded into obscurity now, and heaven help the new player who ventures into it without a posse of friends to play with.

One suspects this will be The Showdown Effect’s fate. Developers Arrowhead do at least have a history of pumping out new content and there’s plenty of room for expansion. As mentioned, there are only four maps at launch. More characters, maps, guns, cosmetic items (to be fair, there are loads of customisation options for your player’s look) and such will doubtless be added, especially as micro-transactions are being used for certain things. So there’s that, the possibility of continued support.

And the theme itself, that might help. It’s full of action movie tropes, nods and winks, with the first character being a parody of Arnie and others being takes on films like Taken, Lethal Weapon and so on. Action buffs like your scribe here appreciate that, but the western setting of Lead and Gold was also appreciated, so… well, you know.

So it’s difficult. The Showdown Effect does nothing really wrong and lots of things are done right. When you play with people you know, it does work. It’s really quite good fun indeed, especially on modes like ‘Expendables’ where cack-handedly blowing up your own teammates with rockets can elicit howls of laughter over voice comm channels. Playing against others, well, that’s been discussed above, but it’s not something TSE can really do much about.

That’s the key thing here. How good TSE is doesn’t depend on the quality of the game, it depends on the quality of player playing it, and it can’t get away from that. It’s an eight out of ten at the moment for fun to be had with friends, but it’s less than that because of the already significant jump between the avid players and you, the noob. So, should you buy it?


Again, difficult. There’s absolutely no reason not to if you like competitive shooters and think you’ll spend time with it. You’ll have fun, of that you can be sure. However, you will need to put the time in to have said fun if you intend on playing publicly. Server numbers are not substantial, so you’ll have little choice about who you play with. Players shut them down all the time halfway through matches. Lots of servers are locked off with passwords and the more interesting game modes (Expendables, Last Man Standing) are barely played. The ‘Ranked’ mode, which is just free for all, is difficult to get into because it takes too long to get into a match (unless you get lucky). It also suffers from inexplicably not matching people together, even though they both start at the same time and get put in two separate lobbies, waiting for players. Doesn’t make much sense that, but it’s not an exclusive problem to TSE.

This review has rambled on a bit too long, so a summary is needed. Should you buy it? Maybe, as it is cheap. Will you be playing it in a month? Probably not, unless you really get into it. Is it good value if purchased and played with friends? Definitely, it’s at its best. Are there enough people playing to sustain it in the long term? Doubtful.

Playing Expendables with friends and letting havoc reign. Then having it all ruined by some guy who’s miles better than everyone else coming in and utterly dominating. Sigh.

This review has rambled on a bit too long, so a summary is needed. Should you buy it? Maybe, as it is cheap. Will you be playing it in a month? Probably not, unless you really get into it. Is it good value if purchased and played with friends? Definitely, it’s at its best. Are there enough people playing to sustain it in the long term? Doubtful.

Playing Expendables with friends and letting havoc reign. Then having it all ruined by some guy who’s miles better than everyone else coming in and utterly dominating. Sigh. 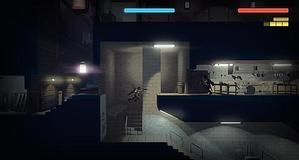