Can Late Night boogie into the early hours of the morning? Or is it a light-weight?

It’s all gone a bit wrong for my sim. Catching wind of an exclusive celebrity house party, he decided it wise to gatecrash. Sneaking into the penthouse by jimmying open the lift doors, he was in. Now all that was left was to get drunk before snorting some cocaine off of hooker stomachs. He’s living the dream – he’s made the A-list, albeit not in the traditional method. Who cares if he’s only an unknown, an extra at the local film studios? This is the life and Marco Fiori (the sim) has arrived.

However, this is where it all goes a bit awry: instead of partying like the madman to wean his way into the local celeb’s entourage, he thought it fit to take a shower. Who can blame him – after a seven hour shift on set, it was only right he spruce himself up for the ladies. Sadly, this was quickly deemed unacceptable party behaviour and he was warned of his conduct. The final straw was with hunger pangs putting a downer on his mood, he thought that preparing a meal for everyone would service his stomach and get brownie points with the host.

Wrong move. Marco was ushered to the lift and set out on the street like a bum. So within thirty minutes of ascending to greatness, he was back in the local dive, wallowing over his failure with a party cocktail as the bartender played an out of tune keyboard. Sounds like your typical Friday night right?

The Sims 3: Late Night is the latest expansion pack for EA’s create-your-dream-life simulation series. Sticking with the format of introducing new items to buy, new places to visit and new occupations to pursue, Late Night is aimed at those with the party attitude. If your sim’s a bookworm or a loner, then they’ll find the bustling new neighbourhood (a pseudo-American high-rise paradise) a bit on the wild side.

Late Night is basically the The Sims 3’s answer to its predecessor’s expansion, Nightlife. Bars, clubs, swank restaurants all feature heavily as sims come out after dark to part into the early hours of the morning. As expected, it implements with all the existing Sims 3 content and merely acts as a door to your imagination.

So, what’s new? As mentioned in the opening anecdote – celebrities. As your sims walk around their surroundings, they’ll come across all sorts of celebrities ranging from A-list to Z-list (indicated by a helpful star meter). Mimicking reality’s obsession with stardom, catching a glimpse of these lucky individuals will send your sim into a frenzy. Naturally, after asking for their autograph, you’ll be presented with a variety of social choices in order to impress them. These range from buying a round of overpriced cocktails to bragging about your wealth. It’s deliciously satirical, but at the same time, by being so self-aware, it offers a compelling gameplay aspect.

Accompanying the star studded inhabitants are all manner of watering holes. Depending on the days of the week, they’ll be populated accordingly. Bar-hopping is the norm as you move swiftly on before a location’s atmosphere grinds to a half – after all, what’s worse than being the last one in the room, dancing alone. Depending on your sim’s local reputation, many of the clubs will remain off limits. VIP red carpet rules apply, although you can attempt to befriend the bouncer or downright sneak in.

Influence speaks louder than money in this town and while becoming a member of the elite will provide your sim with all manner of perks (free drinks, entry, etc), you could find yourself at the heart of a scandal as paparazzi begin to stalk your shadows. Throw in some new skills / bar-specific situations (mixology to impress the drunks and live performances as a band) and you’ve got ample content to explore.

Of course, going hand in hand with the glitz and glam are the darker parts to the night. Drink too much and your sim will be propped up against a wall, emptying his stomach over those new shoes. Befriend the creatures of the night that inhabit the darkness (vampires – it’s not all serious) and you’ll find yourself picking up skills faster than others. You will however, be stuck indoors during the day, but once you venture out at night, you’re free to share your gift (often at request) with others. It’s a great little feature and one that thankfully doesn’t have any major impact upon the game world.

Also worth mentioning are with skyscraper apartments which are perfect for the bachelor(ette) lifestyle. These cheap and cheerful spaces are much more cost effective and they’re located in the heart of town which makes them perfect for drunken escapades. Finish it off with butlers, hireable bartenders for parties and the usual plethora of partying items and you’ve got a nice little package.


I’d not visited The Sims 3 since its launch and Late Night has successful reignited my passion for the series. It’s a welcome addition the Sims 3 family and one that’s executed to the high standards that we’ve come to expect. A must buy for fans of the series, but it’ll do little for convincing sceptics. Then again, Late Night wasn’t built for the naysayers; it was built for those that enjoy crafting imaginary lives.

I’d not visited The Sims 3 since its launch and Late Night has successful reignited my passion for the series. It’s a welcome addition the Sims 3 family and one that’s executed to the high standards that we’ve come to expect. A must buy for fans of the series, but it’ll do little for convincing sceptics. Then again, Late Night wasn’t built for the naysayers; it was built for those that enjoy crafting imaginary lives.

Your sim getting recognised in the street by people. 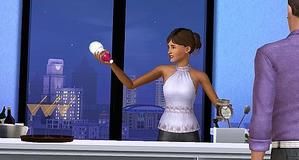