Players must not only confront the spirits of executed inmates while advancing through the game's nine levels, but also fellow criminals on death row, prison guards, and other characters

In the tradition of Resident Evil and Devil May Cry comes The Suffering, a survival horror game set in a haunted penitentiary. Players must not only confront the spirits of executed inmates while advancing through the game's nine levels, but also fellow criminals on death row, prison guards, and other characters. The 12 supernatural creatures in the game were designed by the legendary Stan Winston, best known for his Academy Award winning work in Aliens, Jurassic Park, and A.I. Players are cast in the role of a troubled inmate named Torque, who has been condemned to death for a crime he may or may not have committed. 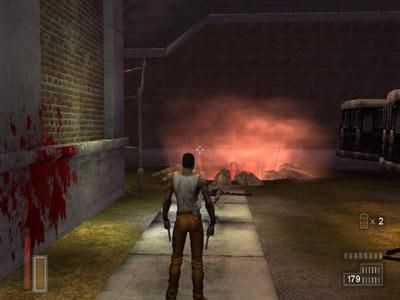 When the spirits of the prison inadvertently free him from captivity, Torque begins a grueling quest for survival as he uncovers the clues to make sense of his bewildering past. To battle his grotesque foes, Torque can find and use ten different weapons, ranging from revolvers to Tommy guns. The protagonist also hides a dark secret that allows him to transform into a superhuman creature when pushed too far, at which point he can unleash his pent-up rage for a limited time. Levels are set within prison walls as well as outdoor surroundings, as enemies attack from jail cells, torture chambers, underneath the ground, from behind trees, and more. During the game, players can make certain decisions that will eventually lead to one of three possible endings.

When I received this game in the mail I had just finished playing Far Cry and was in the middle of Doom 3. My anticipation was not high to say the least. After a year of just poor FPS games UT 2004, Doom 3 and Far Cry changed all that. How could this simple looking game even compare to the big 3. Well after the initial screens I soon came to call it the big 4. The Suffering impressed me, well enough for now, lets dig into the review. 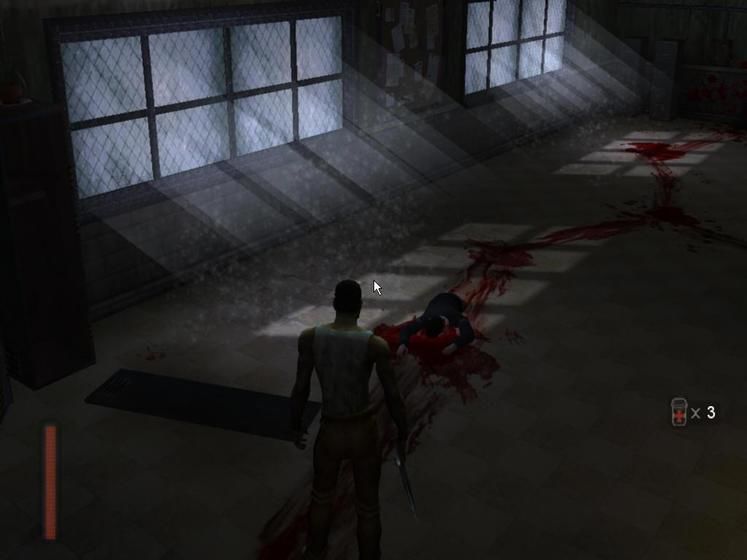 The game came with 2 cds of program and 1 awesome bonus cd with videos of the haunted prison and the making of the game. What a great idea to give people something extra for a change. I actually borrowed the cd to friends just to watch the extras.

The game loaded a bit slow, but the first video segment was worth it. Torque making his way into the prison is a classic among gaming cut scenes. Although not for the youngsters I am sure many will use the sound bytes for fun. Prison language is portrayed as I am sure it truly is. The storyline is instantly begun and you're thrown right into the fray. The action is non-stop throughout the game with barely time to sip my coke!! The game has a unique view approach which can be changed from first person to third person. When fighting multiple monsters third person is much preferred. The standard first person is best when the enemy is right in front of you, especially the level bosses. 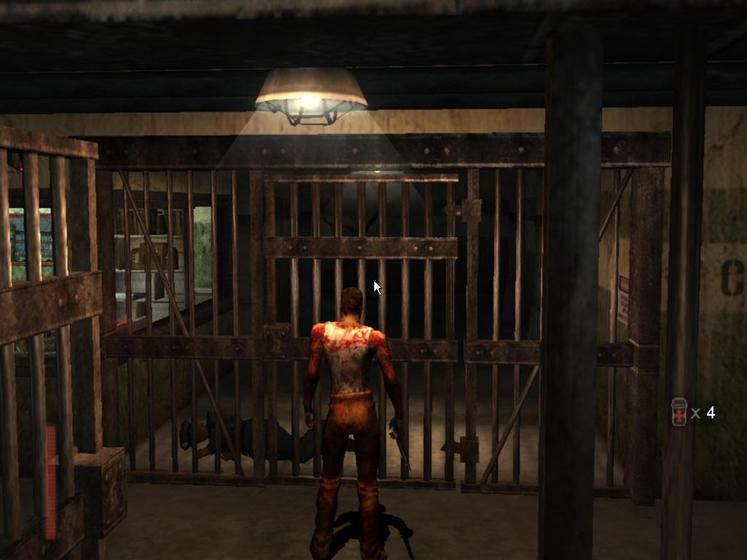 When the game begins you have 1 weapon, a metal shiv which you have taken from a corpse's body. As you fight your way through the prison you gain weapons, the mix includes a revolver, shotgun, machine gun, and few melee weapons, including flash bang, TNT, Molotov Cocktails and grenades. Interaction with your surroundings is something the game does well, whether you're opening lockers, picking up the phone only to receive a busy signal, or moving large objects away from doors or to another location. As seen in such games as Far Cry, Torque has the ability to move objects like vending machines, cages, or boxes in order to advance in the level. Also he can use melee weapons to hack away at wooden boards or boxes blocking doors. Ammo and supplies are everywhere so exploring is a must if you want to survive.

Movement is very fluid and pretty standard fare for FPS games. Torque has the ability to roll sideways and can jump pretty well off ledges. The run function is a bit unrealistic, but moves the game along better. Of course to add to the "horror" effect there is plenty of blood in the game. The feature that really stands out is the blood splatter all over Torque and his weapons. This adds A nice realism touch to this over the top violent game. 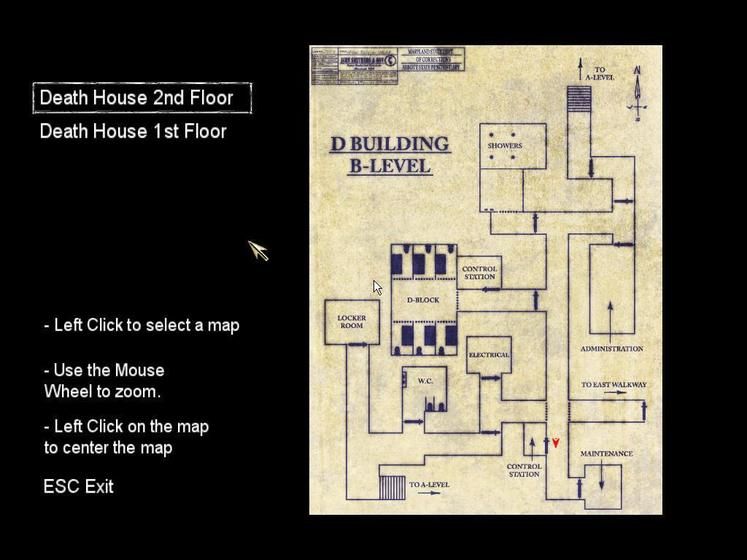 There are a variety of creatures in the game, all portraying different types of tortures and executions of prisoners. The main beasties are Slayers, the 1st contacts, who are spider-like creatures who can climb on walls and ceilings but also have the ability to lift up off the ground and attack you on foot. Next you will meet Marksmen, who are large creatures with built-in rifles that can do heavy damage. Later in the game you meet the mainliners, small creatures injected with a ton of needles all around their body containing a green, deadly substance. Their blood being acid, they can damage you even after you kill them if you happen to step on a corpse. Also included are various humans and special nasty creatures who want to suck the life from you!

The game can really be played in 3 ways, Good, Evil and Neutral. The path you take effects the outcome of the game. So a game with 3 endings can certainly have some replay value. I of course chose to kill everything and ignore the voices for good in my head. I have a feeling most will choose this course initially. 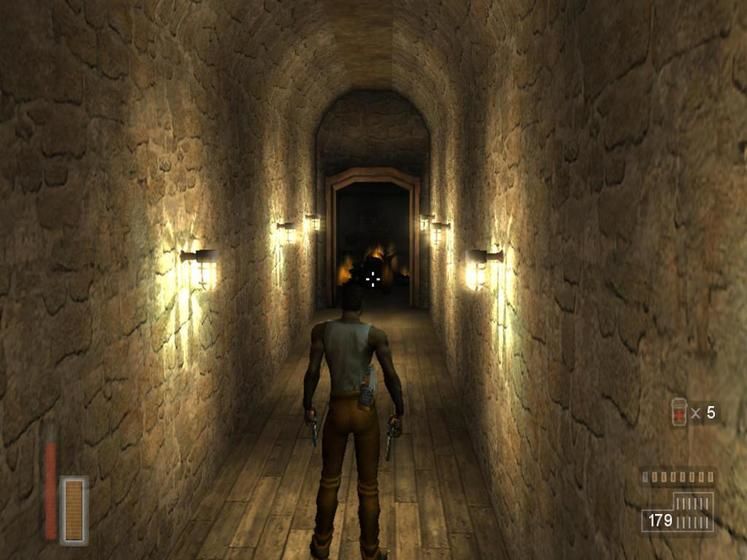 The Suffering is a great game, with a story that is interesting, great sound and graphics. It is, not unlike Doom 3, a good game to play with others around in a dark room. The music and action combine for a scary gaming experience. The last 6 months have brought us many great FPS games and The Suffering is definitely there with them. When you have had enough of Doom 3 go buy The Suffering, you won't be disappointed!!

Click on the picture to enlarge it The Suffering is a great game, with a story that is interesting, great sound and graphics. It is, not unlike Doom 3, a good game to play with others around in a dark room. The music and action combine for a scary gaming experience. The last 6 months have brought us many great FPS games and The Suffering is definitely there with them. When you have had enough of Doom 3 go buy The Suffering, you won’t be disappointed!! 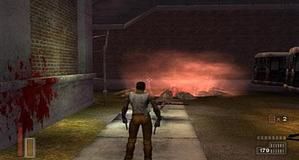