Old-school platforming like your mum used to make. If she made games, that is

A modern take on the proper, old-school style of platforming that used to be a beloved staple of the early 90's console era is difficult to come by these days. Sure enough, the likes of Super Meat Boy, N+ and other games of that ilk have sought to fill that gap, but really none of them manage to encapsulate that timeless appeal of old-school, pixel-perfect platforming as we truly remember it on the crusty CRT displays of the day.

Terran Saga KR-17 by Dallas-based developer Wonderfling however, is arguably the closest PC owners will get to reliving those halcyon days of addicting retro-platforming bliss. With its adorably upbeat chiptune serenades and 16-bit sound effects flanked in turn by some wonderfully realised retro styled pixel artwork, it's a relief that Terrian Saga KR-17's gameplay is equally as accomplished as its audiovisual presentation.


A minimalist affair from the off, Terrian Saga KR-17 takes us back to a simpler time where instead of menus awash with resolution and graphical detail sliders, we just have the bare necessities; controller input configuration, sound and screen size (with a little bit of V-sync mucking about on the side).

After the menu music has subsided (a brilliant sounding retro-riff that evokes childhood memories of Daley Thompson's Olympic Challenge on the ZX Spectrum) and the game begins, we get filled in on the plot that lurks behind Terrian Saga KR-17's retro-platforming beats.

Following the story of a military robot on a mission to liberate an installation on the planet Valiant, KR-17, together with his rocket sidekick J1M, must enter the facility and put an end to the shadowy evil behind the whole affair. While not a stellar yarn by any stretch, it's perhaps a little churlish to criticise it too heavily as KR-17's playful narrative is acceptable and simple fluff that frames its action quite nicely.

Once into the game proper, KR-17 begins to unfurl itself as a well-executed marriage of 2D platforming, shooting and puzzle gameplay elements. Certainly similar to the likes of genre pioneers such as Megaman and Metroid, KR-17 should prove immediately familiar to anyone who has played those aforementioned games.

Boasting a simple, yet engaging premise, KR-17's levels require that the player makes a journey from the start of the map to the end, collecting colour-coded keys and flicking switches along the way to gain access to previously inaccessible areas.

With a premium placed on pixel-perfect platforming skills, KR-17's difficulty curve is beautifully judged. Starting players off with simple platforming conundrums before moving onto levels stuffed with insta-death electrified beams, expanses of insta-drown water and enemies that volley near-infinite amounts of projectiles across the screen, KR-17 is as welcoming and accessible in the early going as it is challenging and engrossing in the longer-term.

In regards to the shooting side of the equation, there are a number of different weapons and attacks that KR-17 can employ to destroy his robotic foes. Aside from the infinitely available laser blasts, KR-17 also has access to a grenade projectile, a massive shotgun, mines and remote detonation explosives too.

And having such burgeoning arsenal of weaponry is a good thing too, as the mechanical foes that KR-17 must contend with are a varied bunch. From melee based enemies, to laser firing foes and swooping cyborg birds that drop bombs from above, players will rarely find themselves in consecutive scraps with the same enemy type.


Its not just about blasting the enemies either. You see, one of the main weapons available to KR-17 is none other than his rocket sidekick, J1M. Taking control of J1M in true guided missile style, players can either send him right into the nearest group of enemies for an easy set of kills, or, as is the case in more than a few levels, J1M can be guided along a route of obstacles in order to unlock an area for KR-17 to reach so that he might continue his journey.

While it's difficult to resist the temptation to simply spam J1M and the other weapons at KR-17's disposal, there is an energy system in place which dictates how many times these special armaments may be used. Luckily, there are recharge stations nearby so if you find yourself running out of energy, you can usually recharge yourself from somewhere close by.

Where Terrian Saga KR-17 deviates from its 16 and 32-bit heritage a tad, is in the eschewing of lives and continues. Instead, if you die and you will, many times, KR-17 will merely reconstruct himself at the last, well-placed save point.

Be warned though, the save points in Terrian Saga KR-17 are merely checkpoints and not 'save points' in the truest and most widely used sense. So if the players finds one of these points, 'saves' and then exits the game with a view to continue later on, the level will be reloaded from the very beginning and not from the point of last save.

In retrospect though, it's easy to see why the save points function in this manner. The levels in Terrian Saga KR-17 are bite-sized affairs which can be completed in anywhere from five to twenty minutes or so. And while this certainly adds to the pick up and play quality of the game, having bespoke save points would perhaps break up the brisk and measured pace of KR-17's well-designed platforming and shooting stages.

Certainly though, the game is difficult and while it never reaches the hair-rending heights of say, Super Meat Boy, there is still a substantial challenge here for both genre newbies and well-practised hands alike.

Really, it's quite remarkable just how tightly the relationship between platforming and puzzling are intertwined; the game never really feels unfair (except for the bosses, which we'll get to in a bit) and so when you die, it's usually because you, the player, is at fault rather than a bug or some symptom of poor game design being the culprit.


Sadly, where the game does falter are in the boss encounters. Brilliantly screen-filling abominations they might be, the boss fights are extremely challenging yet more often than not, for all the wrong reasons. More a case of trial and error rather than a bespoke test of skill, expect to be frustrated and die a great number of times before you are able to best KR-17's cast of nefarious big baddies.

Ultimately though, look beneath the sugary-sweet retro veneer of Terrian Saga KR-17 and you’ll observe the beating, savage heart of a brilliantly old-school platformer that’ll provide hours of nostalgia-tinged entertainment for the same price as a pint. Seemingly the first in a series of games, I look forward to seeing which part of my gaming childhood those maestros over at Wonderfling deftly tap into next.

A pulse-pounding, white-knuckle race to the finish with a huge mechanical spider hell-bent on destroying everything in front of you. 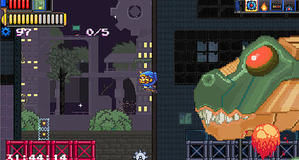