The Typing of the Dead: Overkill

The Typing of the Dead: Overkill Review

Killing zombies involves blunt objects, hand cannons, and lots of pained facial expressions. At least I thought it did. As it turns out, Rick Grimes could have been simply tapping out gory death to stenches, walkers, zeds, and corpses all along, sans moral decay. Typing "apples" can sometimes be as effective as a .45 to the head. Who knew?

How do you reconcile education and fun? Some teachers would have it known that this is done with mathematical bingo, or (at my school anyway) basically any kind of bingo with a subject prefixing the heady game of numerical excitement. In hindsight, we played a lot of bingo.


The Dreamcast generation benefited from a different angle. Spelling and touch typing could be taught to reticent minors in an unconventional manner, but in a way that could perhaps be applied to every educational need from birth until death: just add zombies.

The Typing of the Dead is result of somebody throwing an idea out of their mush cave, and an assembled crowd replying "yeah!" followed up by a lone "seriously?". Taking the established light-gun formula of the House of the Dead, applying uber cool keyboard, you get a hilariously addictive, well-rounded treat for all the family.

Well, maybe it isn't for all the family but a good deal of them. Typing of the Dead: Overkill is essentially a reboot of the 2000 original, albeit with a blaxploitation plot thrown in for good measure. On the surface it may all sound incredible tedious, but somehow it manages to bypass absurdity and arrive somewhere in Downtown Hilarious.

Like the preceding House of the Dead titles, the plot isn't important, save for a few details: zombies, location, and vengeance. TotD:O follows similar lines, with a kitschy thread of plot to follow delivered with tongue firmly placed in cheek. Niceties over, and the typing commences.

As with any good light gun faire, the action is largely presented on-rails. The perspective shifts from room to room, attraction to attraction, mutilated corpse after mutilated corpse, and it's your job to test your reactionary times. Except you aren't shooting.

If like me you were born apparently strapped to a mouse and keyboard input, TotD:O might initially seem passé. You're superior hand speed would decimate the mightiest of hordes, you might think. That is until the zombies come thick and fast.

While my own hand speed betrays a life misspent in the glow of a monitor, when the going gets tough, typing out even the most simple words become a dance of nerves and memory loss. Before long you might forget where the "J" key is situated, or, as I did, simply forget how to use your separate digits for a few moments, pitifully reduced to typing out single letters like a curmudgeonly old grandfather with his "modern" Christmas present.

But after a while, the onset of adrenaline and nervous anticipation recedes, and never before has typing really, really fast felt more badass. Before long those nights spent playing EverQuest while your friends actually socialised in reality doesn't seem like such a bad idea. In the world according to TotD you WILL be king.

Which makes this reboot of a Dreamcast cult favourite (could that be anymore niche?) an absolute pleasure to play. While the light gun formula is essentially a modification on a theme, the twist in the code, having to type, makes for an exhilarating experience. Gone are the wishes for a plug in gun. Gone are the trials of a glum, none peripheral aiming reticule, and in their place is a bona fide shock of inventiveness on the behalf of the original developers.


Throw in a few boss bottles, a few half-quick time events, and some clever word smithery, and you have a zombie ordeal worth surviving through. While the main campaign might only take a few hours to get through, the game packs high score replay value, and really? This is one to show your friends, simply because you can.

Enjoyable, inventive, and great delivery by developers Modern Dream, Typing of the Dead is a curio but one that definitely requires a few moments of attention. If you like typing really quick, zombies, and wisecracking: look no further.

THE TYPING OF THE DEAD: OVERKILL VERDICT

My only bugbear? Swap the guns for keyboards.

The Typing of the Dead: Overkill Essentials 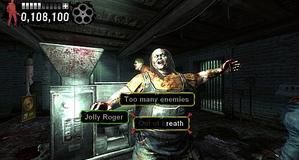