For fans of The Walking Dead, either comic or show, one thing is clear: the characters go through absolute hell, experiencing the worst and most unfair bouts of bad luck this post-apocalyptic world can throw at them. The Walking Dead, for its characters, is misery incarnate. The Walking Dead: The Game, after playing Episode 3, is therefore clearly the most faithful videogame adaptation of a property ever.

Man, things get bleak. I’m not kidding. I was close to sobbing my eyes out at several points in Long Road Ahead, instead opting to stare in stunned disbelief at my monitor at the brilliant bleakness on show (note to self: use the term “brilliant bleakness” more often). By the end of Episode 3 you’ll be sad, depressed, stunned, and itching to play the next one. All that and I’m only on my second paragraph, so I better get on with the review. Basic spoilers for the previous two episodes follow, nothing from this episode though.


At the end of Starved For Help, the woman on the video Lee found promised that as long as the folks at the farm were supplying the bandits with food they’d leave their little group of survivors alone. Unfortunately Lee, Kenny and the others dismantled the disturbing operation at the farm, so for the past few weeks their camp at the motel has had to repel frequent attacks from raiders. Tempers are running thin and morale is low, and talk is turning towards moving on.

That’s how Long Road Ahead opens, and from there on you’ll never guess how things go down. Yes the group does indeed move on, and yes there’s a train involved (the menu screen kinda spoils that part), but aside from that there’s very few predictable moments. My biggest criticism of Episode 2 was that the story and the big horrifying plot twist was predictable from about ten minutes in (I’m pretty sure the guys at the farm used the phrase “why don’t you join us for dinner?” at some point), so I was very happy going through Episode 3 with no clue how things were going to pan out.

And things do pan out quite hideously. No spoilers at all, but someone had already told me that this episode was incredibly bleak and I still was ill-prepared for the gut-wrenching events Lee, Clementine and the others experience. The Walking Dead on comic and TV is incredibly unfair on Rick Grimes and his group, and Telltale have done the same to Lee Everett and his friends. Fortunately there are still moments of humour between getting your soul ripped out a piece at a time.

What I especially wasn’t prepared for was how beautiful and cinematic the game is. Seriously, are Telltale angling for an Oscar (if that’s possible)? The music, lighting, camera angles, direction, acting, facial expressions… normally I have little patience for cutscenes and less for games that claim to be “interactive movies”, but I personally believe The Walking Dead is better directed than the TV show (and I really like that). The fact that they’re making this out of the aging Telltale Tool engine is damn near miraculous – the facial expressions and emotions on display may seem basic next to L.A. Noire or Heavy Rain but they still do the job fantastically well. I really felt sorry for… no, no spoilers here. The smaller moments are done just as well, like the deepening bond between Lee and Clementine. The bit where he cuts her hair, to Clementine’s disdain, is just delightful.

It’s even more amazing that the game’s still holding up with its trump card – the element of choice. Three episodes in it’s getting harder to remember what I did previously, but I’m sure choices I made at the beginning of Episode 1 are still getting referenced here and shaping the storyline. Not even in minor ways either, whole characters and plot arcs could live or die based on whether I went left or right hours previously.

Telltale are even starting to play around with our expectations, which arguably impressed me the most in this episode. I used to hate those banners at the top of the screen that notified when you made an important choice, I felt they were a little too hand-holdy. Now however Telltale are abusing our trust in the most wonderful way possible by throwing out red herring decisions! Choices you make that can’t possibly have any consequences (you’ll know by the end) are getting flagged up as important! Now that’s playing the misdirection game folks, and I love it when developers pull it off effectively.

Technically this is still an adventure game like the sort Telltale are usually known for, with all the puzzling and exploring that entails, but let’s not fool ourselves though: the choices (and the odd quick-time event) are the game, not the puzzles. Puzzles can be solved with a little bit of exploring, or using something and then bashing a zombie’s head in. The sections where Lee can wander about is time to relax, not to over-think, and all goals should be overcome quite easily – if you can’t do it immediately, explore a bit more until you find something new or do something else first. Still, there’s definitely more actual gameplay than in Episode 2, with conversations (often affecting how characters see Lee) playing a huge part in the proceedings.

All in all Long Road Ahead is an improvement over the slightly disappointing second episode, building emotional highs and lows the likes of which are all too rare in this gamey medium of ours. By this point I don’t see how Telltale can fail and I totally believe we’re on course for a serious contender for game of the year, or at least experience of the year.


As for Episode 3, it’s an emotional rollercoaster ride with some of the most shocking and memorable moments in all of gaming. Yes the gameplay remains easy, but it’s the choices you make to define your own personal story that guarantees the game its top marks. The only real complaint I have is the sometimes utterly random nature of the checkpoint system, which is always based on scene changes rather than what you’ve done. You quit at the wrong time and you might have to do whole sections again, and worse have the chance to undo bad decisions – and that’s not what the game’s about, you need to live with every decision you make.

Episode 3 is back up to the quality of Episode 1, and is easily proving to be the best series Telltale’s ever put out. If you’re not on board the Walking Dead train by this point you’re missing out, period. Still, I don’t know if my emotions can handle another two episodes… guess we’ll find out, because the group certainly aren’t in for an easier ride at their next destination. Brilliant bleakness, indeed.

That moment. No spoilers, but when you play it you’ll know. I’m also personally attached to Clementine’s gun training.

Episode 3 is back up to the quality of Episode 1, and is easily proving to be the best series Telltale’s ever put out. If you’re not on board the Walking Dead train by this point you’re missing out, period. Still, I don’t know if my emotions can handle another two episodes… guess we’ll find out, because the group certainly aren’t in for an easier ride at their next destination. Brilliant bleakness, indeed.

That moment. No spoilers, but when you play it you’ll know. I’m also personally attached to Clementine’s gun training. 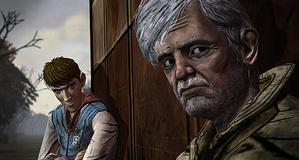