The Wolf Among Us – Episode 3: A Crooked Mile

The Wolf Among Us – Episode 3: A Crooked Mile Review

Ahh, that's more like it. After an extended break that led to a surprisingly short episode Telltale manage to deliver the third episode of The Wolf Among Us a mere month later and it's a decent length. If that weren't enough, Episode 3: A Crooked Mile is profoundly awesome. I love The Walking Dead (and the last episode of that was amazing too) but I still feel more excitement for Telltale's Fables prequel, so to see it go to such cool places makes me very happy. Let me enlighten you. Minor spoilers for episodes 1 and 2 follow, but otherwise as usual I'll keep things oblique.

In the first two episodes Bigby Wolf, the Big Bad Wolf turned detective in charge of protecting Fabletown (the home of exiled fairytale characters in New York), is set on a hunt for a murderer who decapitates their victims and leaves their heads as a grisly calling card. After a visit to a seedy motel turned up the apparent murder scene for the last victim, a troll prostitute (yep) named Lily, Bigby made a shocking discovery regarding the identity of the killer. The whole of Crooked Mile is a race to find this person, but sinister forces are at work to get in the way of Bigby's hunt for the truth.


If there's one thing The Wolf Among Us can't be faulted on it's the quality of its "murder mystery with fairytale characters" story, and while Episode 2 only felt like it made a few steps forward and was just an excuse to build up to the big twist at the end Episode 3 is a lot more substantial in every way. The plot twists further forward, with new parties becoming involved and old parties revealing unexpected connections to the ongoing mystery. I obviously can't reveal any of these since the whole point of the game is the story and how you tackle it, but I was hugely satisfied and absolutely cannot wait until the next episode already.

As for characters, most if not all the surviving characters from the last two episodes show up at some point as their involvement in the mystery gets more and more murky. On top of that we have a few great new character additions to The Wolf Among Us, some original and some from the comics. One I won't spoil, but she's a brand new creation by Telltale and you'll absolutely detest her (in a good way) by the end. Another is Flycatcher, the rather sweet Frog Prince (In Exile) from the Fables comics who is usually seen sweeping the floors of The Woodlands building and is profoundly naive. He's got a key role here but I've no idea whether he'll be important to the rest of the story, still it was great to see another major Fable get animated and Telltale do it perfectly once again. All the characters are really well written and acted, although it's drunk flying filing monkey Bufkin who steals every scene he's in.

It's the events in this story that make it such a triumph however (and it's a pain that I can't tell you about any directly). The pre-credits beginning section is incredible for example (can you tell I'm getting fed up with not being able to tell you guys specifics? Because I am) and I had my mouth hanging open straight away, especially when the choice came - be a hero or capitulate, and pay a price either way. However it's the mid-way choice that stands out in Episode 3 and beats anything we've seen in The Walking Dead, and was only attempted less impressively in Episode 1. In the first episode at a particular point you had to choose whether to go to Mr Toad's apartment or the victim's husband's, and the consequences of which one you chose first included whether an entire character lived or died. Episode 3 goes one further by having a choice of three locations. You can choose to visit them in any order, but you do so knowing full well a crucial piece of the mystery might be denied to you. It's really great and done perfectly, especially with the added threat that Bluebeard will visit the one you didn't choose, and since his own motivation in this matter is still unknown to you it's totally unpredictable how that will go. There is no right choice of course.


In terms of gameplay you should know what to expect by now, although the three-point choice above really kicks it up a notch. There are no interrogations this time around but numerous investigations, although these mostly come down to just exploring the scenes rather than actually figuring anything out. The gameplay in Episode 3 is instead entirely based around decisions and consequences rather than detective skills or "persuading" people. This isn't really a criticism thanks to the quality of those decisions and how weighty they all feel, and most importantly you always feel like you're pushing the story forward and doing something vital. My only actual complaint is the appearance of an unwinnable QTE near the end of the episode, which always feel like a cheat. And that's totally it for complaints.

THE WOLF AMONG US – EPISODE 3: A CROOKED MILE VERDICT

The story of The Wolf Among Us takes a huge leap forward in A Crooked Mile, although for every answer there’s two more questions. Hopefully Telltale won’t finish with an unsatisfying ending like Lost did but right now at the series mid-point I’m on the edge of my seat. Episode 3 is the strongest episode so far in a very strong series. I didn’t bother to mention how amazing the ’70s neon cel-shaded graphics are or how spot-on the voice acting is since you should be taking them for granted from Telltale now, but combined with everything else The Wolf Among Us is shaping up to be potentially Telltale’s strongest series. I couldn’t wait for Episodes 2 and 3 and now I’m sitting here scratching my thumbs waiting for Episode 4. Please don’t have another delay guys, my thumbs can’t take it.

The mid-way three-point location choice. That way seems most plausible, but I don’t trust Bluebeard to go there ahead of me and if I don’t go there first the criminals could get away! So this is the agony of choice!

The Wolf Among Us – Episode 3: A Crooked Mile Essentials 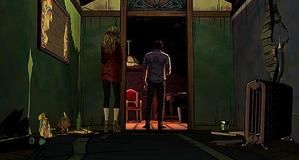 Trending The Wolf Among Us – Episode 3: A Crooked Mile