Torchlight was good on PC. It's just as good on console. Hurrah!

Porting a hack 'n' slash RPG over from the PC to the Xbox 360 sounds like rather tricky business. RPG veterans love their keyboard set-ups, with spells set to various numbers and complete mouse control. Imagine World of Warcraft on Xbox! Preposterous! So when Runic Games announced that it was bringing its PC hit Torchlight to console, we were understandably cautious.

As it turns out, we owe the developer a full apology. Torchlight on Xbox Live Arcade not only feels great, but it actually controls better than the PC original. With spells set to the triggers, bumpers and buttons, and character management made very simple indeed, we found ourselves thoroughly enjoying our latest playthrough of the smash and grind title.


Of course, this being basically a straight up port - albeit with some graphics tweaks and sprinklings of extra content - many of the original issues remain, such as the dull, repetitive environments. Runic also decided that we all obviously have 52 inch TVs, and therefore the resolution should be incredibly high and the text should be teeny tiny, causing mild discomfort on the eyes.

The village of Torchlight is in need of a hero! There are strange goings-on, and you are the man or woman for the job. Torchlight has some kind of story, but let's be honest - it isn't all that important. This is a game about powering through underground mines and dungeons and the like, killing anything in your path. The reasoning is benign.

A quick recap of what Torchlight is all about but we move on the Xbox vs PC analysis. Players choose from a few different classes, determining whether they'll be best in melee combat, ranging attacking or magic. You're then left to engage in hours of nasty-bashing fun, cutting down spiders, trolls, goblins, the works.

Torchlight is about feeling powerful. You can be surrounded by half a dozen enemies, and they'll all fall to one swift slice of your fire-enhanced sword. Along the way, you'll acquire new spells, skills, weapons and armour, and mixing these all up to create exactly the experience you want is key to getting full enjoyment out of the game.

All the makings of a classic RPG are bundled in there. Enemies will drop items that can be equipped or sold, and building up your cashflow to buy even beefier swords later on makes progression even more delicious. Apart from having your own pet to bite at the heels of baddies, you can also use certain spells to summon your own demons and skeletons, creating your own mini-army.

As with the first time around, Torchlight is an entertaining killfest with a real 'just one more dungeon' feel. Ploughing through the hordes is incredibly addictive, and grabbing as many side-quests as you can adds to the replay value, throwing you back into areas you're already familiar with, but garnishing new objectives.


That being said, anyone already familiar with Torchlight will also know that a feeling of repetition eventually sets in, after you're asked to enter the same dungeons for the umpteenth time to retrieve something that you don't really care about or take note of, because it's all the same at the end of the day.


It doesn't help that the environments are rather dull. Brown, grey and other such charming colour palettes are the main dish of the day, and eventually every level begins to look the same. Still, the action helps to quell this issue, and we can't honestly say it was a deal-breaker.

How does it feel to play on an Xbox controller then? Beautifully, in fact. Torchlight's control mapping lends itself perfectly to the 360 controller - so much so, that we actually enjoyed our time with the Xbox version more than the PC edition. Sacrilege, we know, but in all honesty Runic has done a fantastic job.

Spells can be mapped to the triggers, as well as the Y and B buttons, and potions sit neatly on the shoulder bumpers. It all just feels right, and sending out our demon hordes and fireballs is far easier this time around. On the PC, we found ourselves having to look down at the keyboard from time-to-time to make sure we were pressing the right spells - on Xbox, this isn't an issue at all, and the gameplay flows so much better.

The inventory screens have also been given a revamp, and while they don't feel better or worse than the PC version, they definitely work with the console more than the original PC set-up would have. Every change feels clever and solid, and within minutes we were back to switching items around and pawning off all the crap we'd picked up.

Unfortunately, despite this clever revamp, the Xbox version is not superior to the PC version. This is due to one seemingly miniscule issue which eventually turns out to be a huge problem - the high resolution. The action is much crisper in the Xbox version, but it's also much smaller, and can sometimes feel like quite a strain on the eyes.


This is no more obvious than with the text. Try to read absolutely anything in this game, and you'll feel your eyes physically draining of energy. The words are so tiny, that in some places - for example, on the inventory screen - there are actually impossible to read. Note that we were playing the game on a 32" HD widescreen, so TV size was not the issue. Runic - are you trying to put us all in glasses? It's Rare all over again!

While Torchlight’s original faults still stand, the game lends itself wonderfully to the Xbox 360 controller, and we found ourselves preferring the console edition. If you’re looking for a hack ‘n’ slasher to lose a week’s worth of nights to, then sit down - you’ve found it.

Conjuring up a huge demon army of your very own. 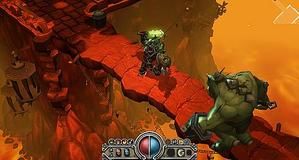